Canary in the commodity mine

Canary in the commodity mine

ABERDEEN, SCOTLAND – Any ideas what this is?

It’s a pretty straightforward chart, that’s for sure: 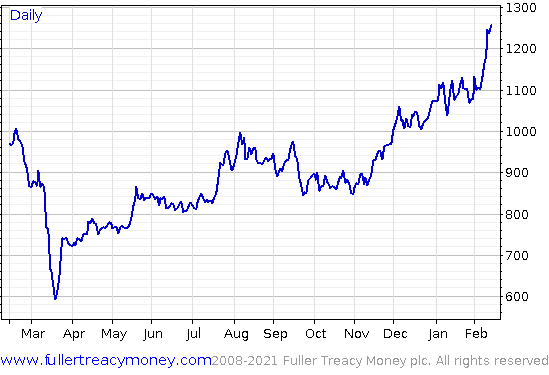 I know plenty amongst the Capital & Conflict readership like their metals, so I suspect that chart may be familiar to some of you.

That’s a chart of the platinum price. After years of misery following Volkswagen’s dieselgate scandal, gold’s denser sibling is finally having a good time. If we zoom out, it looks like platinum’s crash last March marked a fundamental change in trend: 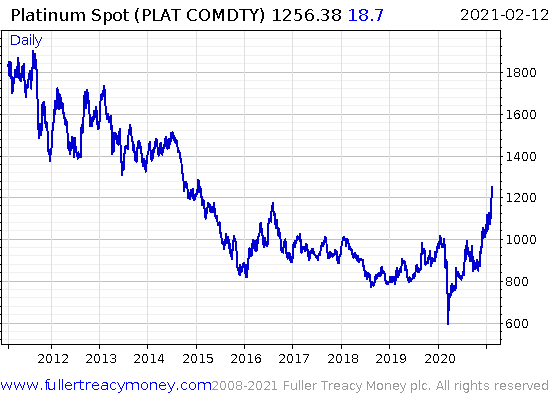 Exchange-traded fund (ETF) holdings of platinum (which reflect demand from large investors) are now at an all-time high – though that should be taken with a grain of salt as ETFs are a relatively recent innovation. When I say “all-time high”, that’s using data that only goes back to 2007 – had platinum ETFs been available to investors when the metal had a spectacular rally in the 1970s, the record may have been different.

Looking more recently, it seems some investors got crazily bullish on platinum a year too early – while the bull run finally began in March last year, there was a massive surge in platinum holdings at the beginning of 2019: 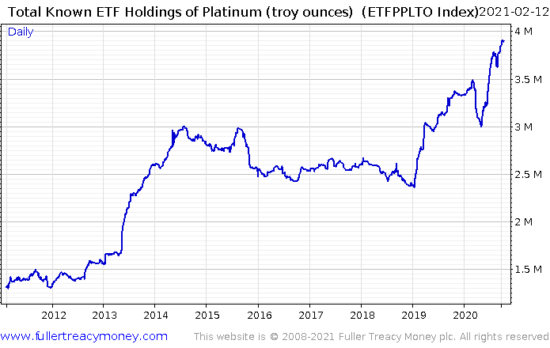 “Better three hours too soon than a minute too late,” as the saying goes. But I wonder what it was that spurred that demand in January 2019. Perhaps platinum just looked unsustainably cheap back then – after all, the price was damn low.

Whatever the case, platinum finally appears to have bottomed. As somebody who bought it back in 2016, this is good news (albeit a lot later than I’d have liked).

But I think this change of fortune for a commodity that has trended down for a decade sends a more important signal. I think this is yet another indicator that commodities are at the beginning of a strong rally – and this is inflationary. Not only do commodities rise in price when investors believe their currency is being devalued, higher commodity prices in themselves lead to higher inflation, as the products they are used in become more expensive.

Platinum probably isn’t the best example of this, as higher platinum prices will only be passed on to a small niche of industries (diesel car manufacturers and jewellers, amongst others). But the backdrop to this five-year high in platinum prices is a surge in the oil price, which has a much broader effect – effectively making energy in general more expensive.

Despite much of the world economy still being locked down… the oil price is now higher than before much of said lockdown occurred: 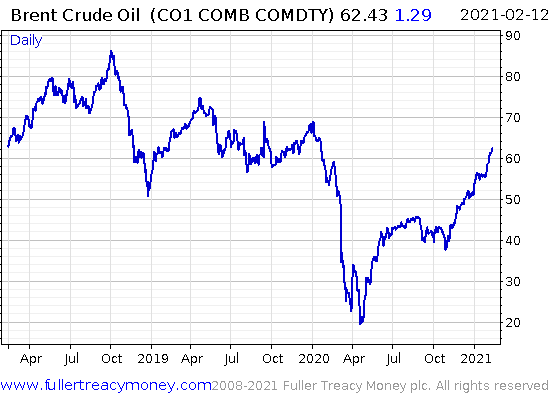 If oil demand is this strong before the world economy reopens… how hard will it rally when it does?

Markets are forward looking of course – this oil rally is an anticipation of the future oil demand… but I reckon the reopening will only cause the oil price to burn higher. And more broadly, I think the reversal in platinum – after a decade in decline – is only just beginning.