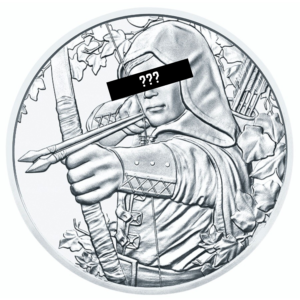 ABERDEEN, SCOTLAND – Who is it that’s been pushing the price of silver around over the past week?

They’re hooded for sure… but is it really Robin, the Prince of Thieves? Or does another, more mysterious individual stand under the cowl?

Silver made it to the $30 level on Monday – the highest it’s been since 2013 – before getting whacked down to the mid-$20s. The rally started suddenly late last week, and got a lot of hype over the weekend. The action in sterling was similarly sudden, though not quite so extreme – silver made it above £21, where it’d been in September.

The volatile price action is hardly shocking for anybody who watches the silver price, but what’s interesting about this move has been the chatter which has surrounded it – and the sudden drain of physical silver inventories from bullion dealers here in Blighty and over the pond. Check your favourite bullion site and you’ll likely find they’re either sold out of silver, or they’re having operational difficulties meeting demand.

Silver premiums (the price you pay to bullion dealers on top of the raw silver price) have exploded accordingly. When checking the price of a silver kilo bar over the weekend, I refreshed the webpage a few hours later to find that the price had gone up by more than a hundred quid – despite the London spot market and the silver futures market being shut.

And when the markets opened, the silver ETFs received some major bids. Following sudden demand, the largest silver ETF – the $SLV – expanded by almost $944 milllion on Friday: 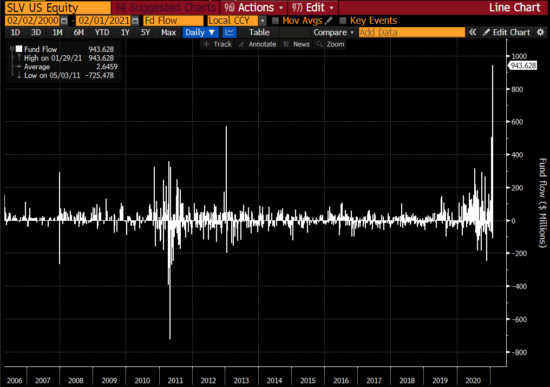 So what’s going on here?

The mainstream press is pointing the finger squarely at millennial traders following the GameStop saga.

It’s Robinhood and Reddit that are to blame, they say. The former, a user-friendly, commission-free trading app, has turned investing into a videogame. The latter, a website hosting the WallStreetBets trading forum, has enabled herd mentality and the spread of market misinformation. The pair of them combined have got the kids loading up on silver call options, piling into silver ETFs, and telling everyone to buy silver coins…

… or so the narrative goes. While plenty of that is true, I’m not so sure that’s what actually caused the silver spike.

There’s an interesting dynamic taking place here where folks on WallStreetBets are claiming that the users promoting silver on the forum are bots, trying to distract them from their GameStop crusade. Meanwhile, silver bugs on Twitter are happily spamming the #silversqueeze hashtag, welcoming WallStreetBets users into their community, and then claiming that Twitter is censoring them.

Who is deceiving who here?

If we look at the spike itself, the options market began preparing for massive volatility in silver on Thursday last week, but there was a murmur on Wednesday (ochre arrow): 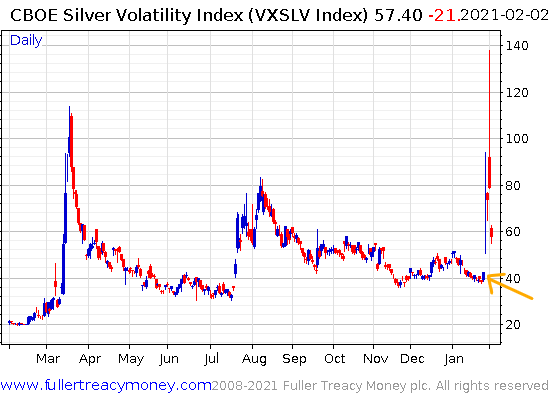 On WallStreetBets, there was a post saying that shares in the $SLV silver ETF would go from $25 to $1,000 on Wednesday afternoon, but their account has since been deleted.

A more measured case was made by another user on Thursday, but the user has since been banned from posting on WallStreetBets.

Note that massive spike which almost hit 140 on the index. That was on Monday – to illustrate just how massive an event that was for silver volatility, that’s the highest reading I can find on that index, going back 2011 (before the silver peak).

This is mostly a hunch, but I think the rise in silver volatility before all the mania about silver arrived late in the week and over the weekend indicates that the initial move was started by somebody else.

I thought this Twitter exchange with Ben Hunt, an investor who focuses on market narrative as the driver of prices, was revealing: 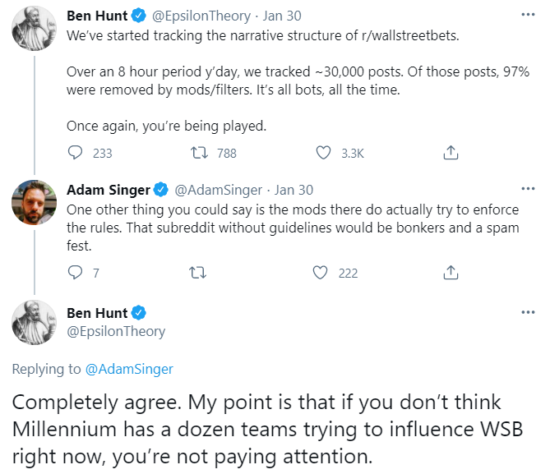 It’s a matter of public record that some hedge funds trawl amateur investor forums for hints of future trends – is it really much of a stretch to think they might attempt to manipulate them for a quick trade? I don’t think so.

It’s ironic that I don’t believe the Robinhood crowd is responsible for this move in silver, only exacerbating it, as last year I predicted that precious metals ETFs would become the most popular holdings on Robinhood (No hooded saviour? – 23 July 2020).

Sadly, Robinhood stopped publishing the top ten holdings of its users, so while the ETFs did rise in popularity on the platform after my prediction, we likely won’t know if they make it to the top spots.

It’s good to know that people are buying silver out there, for I meant it when I said that silver is the best asset to own this year. But I think this sudden spike and demand surge are a flash in the pan – just a foreshadowing of the real surge to come…