ABERDEEN, SCOTLAND – “Here we go!! – insanity” read a message from a colleague out in the States yesterday.

Attached was a screenshot of the bitcoin price, which had just hit the striking figure of $39,999.99. To think that less than a year ago the bitcoin price was sitting at a lowly five thousand bucks last March is an illustration of how fast the bitcoin price can move… and how wild the last ten months have been.

Further to Going ₿allooning yesterday where we took a look at some of the curiously large bitcoin transactions taking place recently, and The Night Trade on Wednesday where we wondered why the bitcoin price only goes up during the night, right on time to close the week two more billion-dollar transactions rattled across the blockchain last night.

At 10pm yesterday, $1.4 billion worth of BTC (using the exchange rate at the time) was transferred across the blockchain. Then at 3am this morning, almost $1.5 billion went through:

Green bars illustrate bitcoin transaction volumes per hour, displayed in USD terms. The particularly tall bar on the left from 2 January got a mention in yesterday’s note.
Source: ByteTree

These payment surges are very intriguing, and their source a topic of debate. That we can spectate like this on transaction flows like its free sport, baying and howling at the action from the stands, is a unique quirk of bitcoin’s public monetary system where all transactions can be viewed by anyone with internet.

The crypto research firm Chainalysis, which combs through all this public payment information for gems of insight, made some interesting observations yesterday on large bitcoin transactions that took place in December (emphasis added):

It may be large (and possibly new) investors taking their bitcoin off crypto exchanges to keep them safe (shielding them from the exchange going broke due to hacking or malfeasance) that’s creating these billion-dollar bitcoin transactions. We’ll keep watching.

Now, as promised earlier in the week, I’d like to tell you what I think the biggest risk is to the soaring bitcoin price.

It comes down to this: bitcoin, to my eyes, has not proved (yet) that it can prosper and soar when tech stocks are doing poorly. In recent history, for BTC to be doing well, tech needs to be doing well too.

The BTC price surges in 2016, 2017, 2019, and 2020 all occurred to a backdrop of US tech shooting the lights out. BTC boomed in these years when investors saw and knew that tech stocks were on a tear – it wasn’t pre-empting the tech rally, it was following it.

BTC was the digestif and cigar after the tech feast, the afterburner. Can BTC boom when tech stocks are getting ploughed? Maybe – and the true believers certainly think so… but I’m not so sure it could do that on a sustained basis, if bitcoin keeps trading the way it has until now.

Here’s a chart of bitcoin (blue line, log scale) against the Nasdaq tech index (green line, linear scale), which I’m using as a proxy for the tech sector. The bitcoin price is on a log scale here to rein in its incredible performance – please forgive the mangled figures on the top right, the charting software isn’t used to price gains this large: 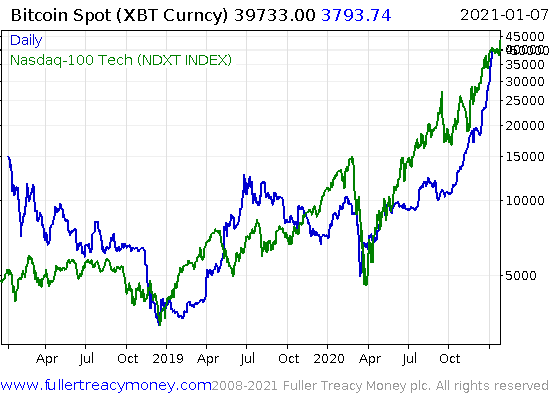 The correlation between the two isn’t perfect, but it is visible. Note how bitcoin really started to accelerate in October, after the incredible performance of the Nasdaq had been cemented – almost like it got the green light.

We saw a similar dynamic take place in 2016 (no log scale required this time). Note bitcoin’s sudden “catching up” to the tech rally in late May, and again in late December: 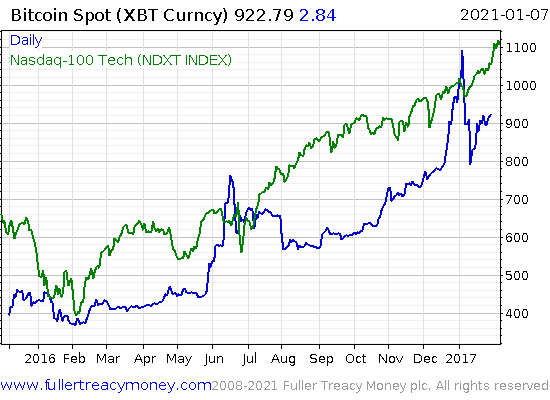 And then again in 2017. Note how bitcoin began to really blow up in October (like 2020), after the Nasdaq began making new highs after a period of consolidation. Once the green light was given, it was off to the races: 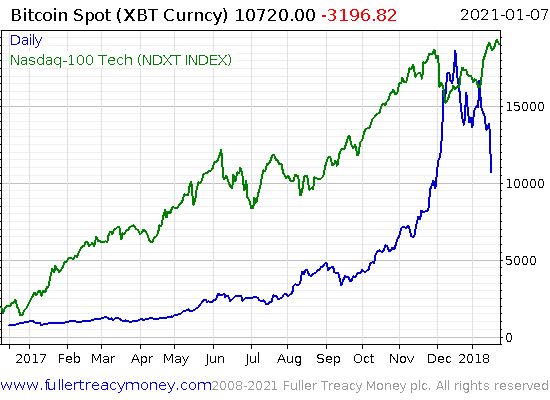 Remember here, I’m just talking about the risk to bitcoin’s price, not its integrity. I’m a bitcoiner – I love the asset and the technology behind it. But I struggle to see how its price continues to rally onwards if the grand tech rally we’ve witnessed in recent years begins to crumble. If bitcoin starts getting a red light from tech, I think we’ll start seeing plenty of red on its chart too.

What I think endangers the tech rally is the return of inflation this year. In the low inflation environment of the last decade, investors and banks have been happy to give their money to tech companies who will blast it all on growing their business and conquering the world. They haven’t been too fussed about receiving dividends along the way, as they’ve been confident their money will retain its value.

If inflation arrives after all the government spending to deal with the WuFlu, the above dynamic goes into reverse. Unsure of the future value of money, banks and investors begin raising their lending costs and repayment terms to ensure they’re making real returns, and begin favouring more traditional enterprises with stronger and more reliable cash flows.

I believe inflation would stumble tech – and that would trip this bitcoin surge.

This creates discord in the bitcoin narrative, as BTC is supposed to be inflation resistant. But while bitcoin takes inspiration from gold in its inbuilt scarcity, it doesn’t trade like gold – it trades like tech on steroids.

Now perhaps this behaviour will change – I can certainly imagine bitcoin attracting investment for its scarcity when everyone’s purchasing power is eroding. But for now – and counter to how bitcoin is “spun” – I think inflation might actually be the enemy of this great BTC rally.