No nukes for me

No nukes for me

Have you been investing in Iranian nuclear technology?

If you have, I applaud your audacity. Fortune favours the bold, and investing moves don’t get much bolder than trying to profit from Iranian nukes.

To be clear: I have not been investing in Iranian nuclear tech… but it was interesting to see what happened when somebody joked that I had.

A friend of mine recently sent me fifteen quid over PayPal, to settle a small drinking debt. Similar to online bank transfers, PayPal lets you attach a note to the payment.

My friend was feeling flippant. This is what showed up in my PayPal account. 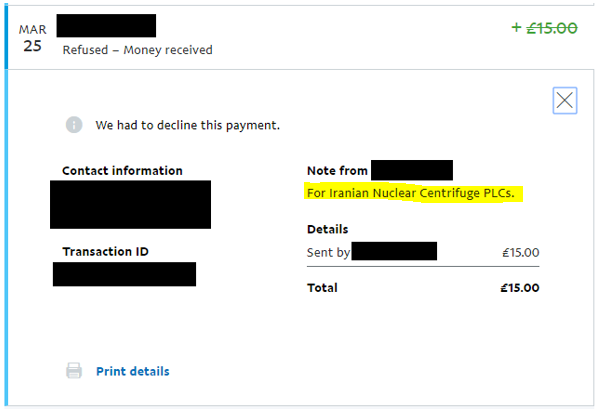 Payment declined. PayPal doesn’t want to take any chances with somebody funnelling cash into Iran’s nukes, even if it’s only £15.

As you can see, I’ve redacted personal information, though these transaction attempts will have probably been picked up in the massive online surveillance sieves of intelligence agencies. (Hopefully Mossad doesn’t take it seriously. For the record, I am healthy and have no intentions of killing myself.)

My friend tried again, making it quite clear that the money was not to be invested in the aforementioned Iranian nuclear industry. 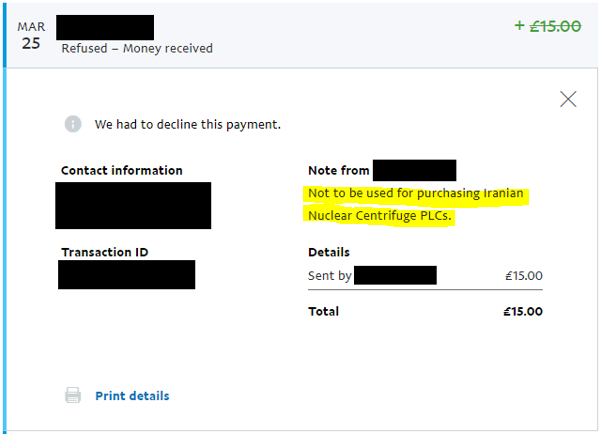 All joking aside, the situation just goes to show how beholden we are to banks and payment processors, who may have political biases, or are themselves beholden to the state.

How much of your wealth is in the grip of these gatekeepers? How financially crippled would you be if moving money to and from your accounts was impossible, because you are considered politically unpalatable?

This happened to WikiLeaks in 2011, when intermediaries such as Visa and MasterCard would no longer accommodate it. In response, it started taking bitcoin donations and accepting bitcoin in the WikiLeaks online shop.

This has worked out very well for it over the years. It’s made a fortune, while circumventing the financial intermediaries and middlemen who would freeze its finances. But as cryptocurrencies have taken off in popularity, it seems the problems of the old have returned.

Coinbase, one of the world’s largest cryptocurrency exchanges, has blocked WikiLeaks from using its services.

This isn’t so much of a threat to WikiLeaks as before, as Coinbase doesn’t hold nearly so much influence in crypto as Visa or MasterCard does in the paper currency world. WikiLeaks can just find a different crypto exchange when it wants to swap its bitcoin for fiat.

But it’s interesting to see things go full circle, as a currency adopted for its lack of middlemen becomes a victim of its own success…

In the meantime, the new digital currency world is beginning to look a lot like the old paper money world. I heard the following at a conference last week, from a “cryptocurrency investment banker”:

“The future is even brighter than it’s been, and when I mention regulation, and things going back to the old world, these are not bad things. Not bad things at all.”

What was the point of the new world, if it’ll be just the same as the old one?

I’d love to know your thoughts in the comments below.

For those interested in “unplugging” their wealth from the financial system, and avoiding the financial gatekeepers altogether, we’re working on a guide for it. Keep an eye out for it in the near future.