Have you heard of the Kanyon? It’s a new addition to Russia’s nuclear arsenal. It’s an underwater drone, designed to be fired from a submarine like a torpedo.

It can race across the ocean for days, thousands of feet below the surface… before reaching its target and triggering a nuclear tsunami.

Kanyon was the CIA’s codename for it. In Russia, it was named the Poseidon – after a public vote! (If “Boaty McBoatface” is any guide, I sure hope our nuclear deterrent doesn’t get renamed by the public.)

The Kanyon sounds straight out of a Hollywood film – the lengthy wait before it reaches its target provides plenty of time for character development and for the hero to save the day.

Technology makes truth stranger than fiction – especially so when it comes to nuclear weapons and drones. The title of this email is taken from a patch worn by the US “Missileers”, who stand ready around the clock to launch the US’ nukes. 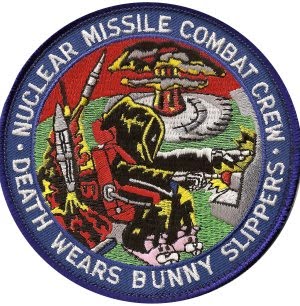 Enforcement of uniform standards is notoriously slack for the Missileers. Should a nuclear war break out, they’ll probably be wearing “snuggies and slippers” as they reign death on an untold scale across the planet.

Strange. And technology continues to make the world stranger. Just earlier this month a drone was used to fly a monstrance across a church into the hands of a Catholic priest, in the middle of a service.

Meanwhile, the US military wants its drones taught to find, identify and kill people – all on their lonesome, without humans in the loop. The US Department of Defence – who I mentioned last week is vastly expanding its drone arsenal – is requesting that companies with artificial intelligence capabilities partner with it to develop the nefarious system.

From the brief (emphasis mine):

OBJECTIVE: Develop a system that can be integrated and deployed in a class 1 or class 2 Unmanned Aerial System (UAS) to automatically Detect, Recognize, Classify, Identify (DRCI) and target personnel and ground platforms or other targets of interest. The system should implement learning algorithms that provide operational flexibility by allowing the target set and DRCI taxonomy to be quickly adjusted and to operate in different environments.

The brief goes on to mention the potential use of these drones in a “homeland security” environment. What could possibly go wrong?

Interestingly, those who write the learning algorithms that give the American drones the “intelligence” the military would like, stand to become high value targets in the event of a war.

The legal implications of these developments are already becoming evident. Under current international humanitarian law, “dual-use” facilities – those which develop products for both civilian and military application – can be attacked in the right circumstances. For example, in the 1999 Kosovo War, the Pancevo oil refinery was attacked because it could fuel Yugoslav tanks as well as fuel civilian cars.

With an autonomous drone weapon system, certain lines of computer code would almost certainly be classed as dual-use. Companies like Google, its employees or its systems, could become liable to attack from an enemy state. For example, if Google’s Project Maven image recognition AI software is incorporated into an American military autonomous drone, Google could find itself implicated in the drone “killing” business, as might every other civilian contributor to such lethal autonomous systems.

Proxy wars, of the kind we’re now involved in with Syria, become even more abstract with such weapons. Consider autonomous drones endlessly roaming and refuelling themselves over contested areas, automatically destroying targets they have learned are enemies, and enemy drones that are doing the same thing.

Private military contractors are politically palatable to use in war as their deaths are not recorded as official military casualties – autonomous drones will be politically delicious.

Technology bends reality, and not necessarily for the better. But like it or not, it will be bent. And investors ahead of the curve stand to make great gains from it. Our tech specialist Sam Volkering has already recommended one drone company poised to soar into this strangeness to his readers, and explained in his most recent issue of Revolutionary Tech Investor where he thinks the industry will head next.

Curiously, as we progress into the future the past becomes strange too: it’s become hard to imagine a world without phones or the internet.