ABERDEEN, SCOTLAND – Is our interest in shiny bits of metal and magical internet money leaving our flank open to a major currency move?

… everyone is predicting the Fed to carry on printing money like they do and this makes everyone flee to gold and silver and now crypto… But. And it’s a big but… What happens if the Fed decide to stop printing dollars? In fact they go into reverse. They start extinguishing dollars left right and centre regardless of the destruction and ‘deflation’ to increase its value by creating scarcity? What then? Gold, silver, crypto will be rendered useless. Have we discussed this? No, I thought not. Can we please?

We have actually discussed this – but it was quite a while ago (A most destructive milkshake – 24 July 2018).

To begin with, central banks – bar the likes of those in Turkey, Iran, and Venezuela – do not want their currencies to increase in value. As the head of research at the Bank of International Settlements (BIS) said back in 2016, “there may be no winners from a stronger dollar” – and that includes the US. But we’ll go into that in a second.

The mechanism described by the reader where the Federal Reserve goes about extinguishing dollars rather than creating them, was taking place back in 2018 – and we saw how long the Fed could get away with it before something broke. Back then, the newly appointed Fed chair Jerome Powell was hiking interest rates and performing “quantitative tightening”. During “QT”, the Fed began selling the assets it had printed money to buy, effectively deleting the dollars it had printed during quantitative easing (QE).

The dollar got stronger, interest rates rose, and it was a bad year for gold, silver, and especially bitcoin… 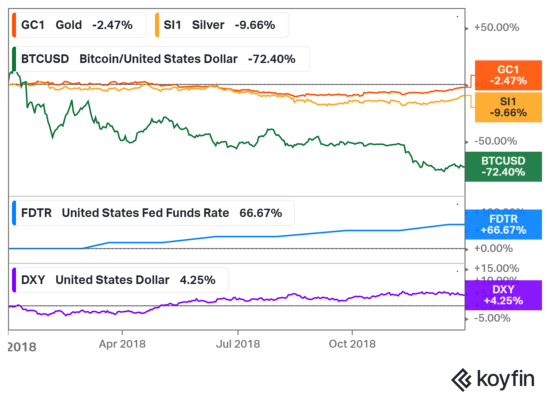 But in short order, the consequences of tightening the financial system were revealed. In an ever more indebted world, higher interest rates are bad news, as is a more expensive global reserve currency (the USD). Cracks soon began to spread, and after “Bloody October”, when corporate debt began selling off alongside the stockmarket, and Italian government borrowing costs suddenly spiked, Powell and the Fed board got the message: keep this up, and something serious will snap.

By November the Fed stopped raising interest rates. It had managed to bring them up to 2.5% before conceding, and began cutting them all over again in 2019.

Powell managed to keep QT going for another year, with the experiment ending in September 2019… but at the end of the day, the Fed only managed to hoover up around $760 billion of the $4.5 trillion bucks it had injected into the financial system. And in the three months after the Fed stopped QT, it had already begun printing again – ramming $400 billion back into the financial system.

With the reversal of the Fed, gold, silver, and bitcoin had a great 2019… 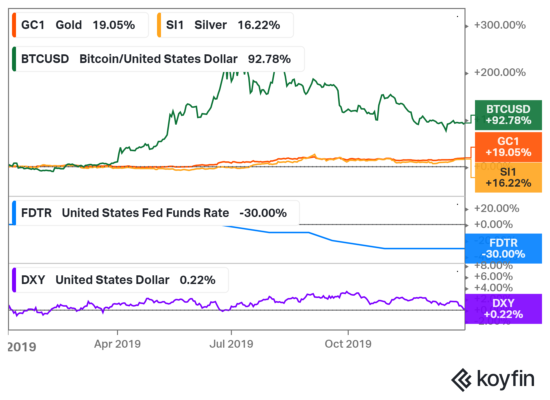 The Fed has a legal mandate to target maximum employment, stablise prices, and moderate long-term interest rates – it does not have a mandate to increase the value of the dollar. Indeed, targeting deflation would effectively be illegal for the Fed due to the widespread unemployment it would create from indebted companies going bankrupt. Not to mention when major international banks go bust as their loans are defaulted on and their borrowing costs become suddenly much harder to bear.

Assets such as gold and silver would not be rendered “useless” in a deflationary environment as the reader suggests (though admittedly, their prices would fall), for severe deflation represents an existential risk to the financial system and thus fiat currency. As the head of research at the BIS said back in 2016, “there may be no winners from a stronger dollar.” An ultra-strong dollar could be its own undoing.

It’s the efforts of central banks to avoid this fate at all costs that stokes our interest and investment in the likes of gold, silver, and BTC. (Watch out for silver in particular this year by the way – I think it’s gonna go on quite a tear…)

This ability of the Fed to crush the global economy if it wanted to by sharply raising interest rates and ending QE was turned into a source of amusement recently by Luke Gromen, a great macro thinker and gold expert.

In December, the Fed made a commitment to helping fight climate change (as is the fashion now for many central banks). But if the Fed really wanted to stop it… it could halt it in its tracks with a mere change of the interest rate it controls (known as “fed funds”):

The economic carnage and mega-bankruptcies that would ensue from 15% interest rates would cripple global energy consumption – and thus, carbon emissions. It seems unlikely the activist green crowd will seize on this. But if you see Extinction Rebellion and/or Greta Thunberg protesting outside the Eccles Building in DC – things might get really interesting…