What’s a dollar milkshake when it’s at home? Well, if Brent Johnson is any guide, it’s a move in currencies that is going to rip the world apart and make it beg for mercy.

Brent is a wealth manager and the CEO of Santiago Capital, an investment firm which specialises in gold. I had the pleasure of having him on The Gold Podcast recently, just after the recent incident at our Customer Service Department.

Despite having a long-term sunny perspective for gold, Brent thinks the yellow metal is in trouble over the short term. Why? Because there’s an elephant in the markets which is beginning to rampage: the dollar.

Brent’s calls his prediction “the dollar milkshake theory”. Since the financial crisis, central banks all got together to fill the financial system with liquidity through low rates and asset purchases (quantitative easing). All this liquidity, coming from all angles, has turned financial markets into a frothy milkshake, with sky-high bond and stock prices.

As capital is “global and mobile” in the modern world, it will travel to wherever it is treated best. With the European Central Bank, the Bank of Japan and the Bank of England all still running the printing presses, their currencies aren’t looking very accommodating for investors, but the US is.

The Dollar Index (which values the dollar against a basket of other currencies) has rallied strongly over the last few months, as you can see below. 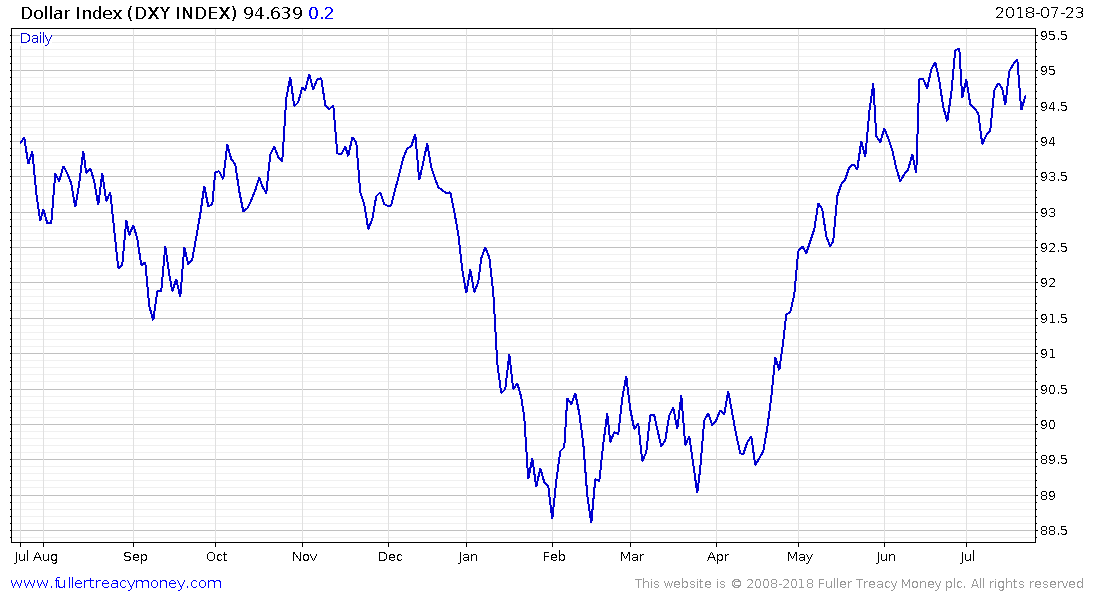 That $11 trillion in debt held outside the US just got an awful lot heavier. Foreign companies and governments who borrowed in dollars are refinancing at higher rates, in a stronger currency. In other words, it’s getting a lot harder.

Should they default on their dollar loans, the problem becomes worse for everybody else as defaulting on a loan destroys currency, shrinking its overall supply. It’s a painful cycle that creates an even stronger dollar. And a strong global reserve currency is deflationary for the world.

This dollar strength is already starting to stress emerging markets. Brent says this is just the beginning. With the Dollar Index today at around 94, he sees the Dollar Index at 150 in the next couple of years. This is bad for gold, as the stronger a fiat currency is, the more gold you can buy with it.

For some perspective on how long it’s been when the Dollar Index was at 150, we need to go back to the 1980s:

The 80s bull run was stopped by the Plaza Accord. France, West Germany, Japan, the US and the UK all got together to agree to devalue the dollar together by intervening in currency markets. Brent expects this will happen again when dollar strength cripples asset valuations everywhere except the US, and other nations beg the US to devalue the dollar.

I’m not entirely sold on Brent’s thesis, as I don’t think the dollar can strengthen so much without deteriorating economic conditions in other countries (like China) bleeding into the US. And if the Federal Reserve believes the US economy is drooping, it’ll cut rates and start adding to the milkshake all over again, weakening the dollar.

But give the podcast a listen, and decide for yourself. You can listen to it here on iTunes or here on Soundcloud.