Watch the live stream today at 10am…

We’ll be streaming our latest episode of Southbank Live today at 10am on our YouTube channel – if there are any relevant news items or investing topics you’d like John Butler and I to discuss, please send them over to us here.

“Sorry chaps. I quoted you for a twenty when it’s a forty-footer. It’s gonna be double bubble.”

CHEDDAR, SOMERSET – In yesterday’s note, we took a look at bitcoin’s cycles. Over its 12 years in existence, it has matured through three epochs lasting roughly four years apiece.

I wondered if we had seen the end of the latest cycle, or if it still has a final rally left in the tank.

Could there be room for a “double bubble”, or will we have to wait another four years?

As I said yesterday, from the amount of bearishness I’ve seen from market commentators in recent weeks, I’m feeling pretty bullish. But one must never fall prey to wishful thinking – and as I’m a BTC holder, I of course want the market to be strong.

This amusing exchange on the crypto-corner of Twitter sums up the sentiment pretty well:

The problem with relying on cycles like this is that when everybody knows of a pattern and expects it to repeat, it ceases to become reliable. If every market participant believes bitcoin will be a swamp for four years and then explode higher afterwards, and uses that belief to inform their investment decisions, the market will simply cease to behave that way. For those previous cycles only occurred when market participants weren’t behaving like that – when they weren’t allocating money (and thus influencing the price) following those beliefs.

Thus, knowing the “secret” of the market, changes the market. It’s a bit like the “observer effect” – where the act of observation can change the nature of the observed.

And of course, bitcoin could begin to massively deviate from its cyclical nature thus far purely as a result of growing up. The damn thing is only 12 after all, and as a result is so young that I don’t believe we’ve really witnessed its true nature yet.

As I’ve said previously in this letter, bitcoin is perceived today the same way as commercial electricity was in the 19th century: strange, dangerous, and with such limitations as to have few applications. It was scorned by some, laughed at by others, and made vast fortunes for those who dared to imagine a different world.

The true potential of electricity was only made evident well after it arrived. Hell, we’re still discovering it now – bitcoin itself is a fine example! So if the full impact of electricity has yet to be appreciated in its entirety today, I think we’re a very long way from seeing bitcoin’s “final form”. The cycles we’ve observed in these short 12 years may have no expression in the ages to come.

But yesterday, I told you there was another reason I felt bullish on BTC, and before we close for the weekend, I’d like to share it with you.

In November, bitcoin will have a major “software update” . The last time an event like this occurred was in July 2017, and the BTC price more than quintupled in the five months afterwards. 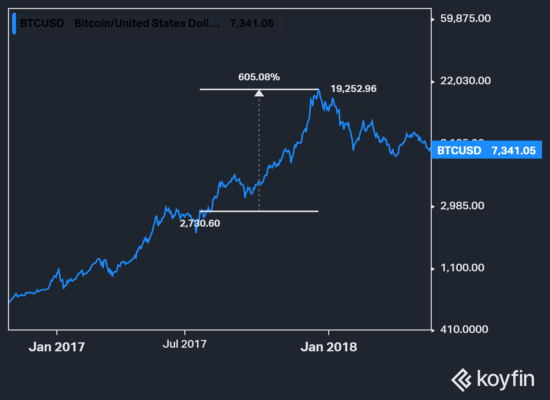 One should note that this “software update” occurred shortly after the 2017 halvening, so how much of the hype can be attributed to the update rather than the halvening is up for debate. However, there can be no doubt that this update and its consequences (it led to the creation of Bitcoin Cash) created huge interest and coverage in the space.

The last time around, the “software update” was an innovation called Segregated Witness (or “SegWit”), which increased the number of transactions the bitcoin network could process.

This time around, the “update” will increase the privacy of bitcoin transactions and make more room for bitcoin-based smart-contracts (decentralised applications). It’s called Taproot, and if you follow the bitcoin space (and maybe even if you don’t), you’re going to be hearing a lot more about it as we draw closer to November.

What the bitcoin price will be by then is anyone’s guess, but if BTC has regained its composure by then, I believe the rollout of Taproot will make for a very exciting winter…

PS While I like to cover crypto often in this newsletter, my colleague Sam Volkering does it even more over at Exponential Investor – if you want to stay in the know on crypto, sign up here.