Was that the end of the crypto cycle?

Was that the end of the crypto cycle?

Watch the live stream on Friday…

We’ll be streaming our latest episode of Southbank Live on Friday at 10am on our YouTube channel – if there are any relevant news items or investing topics you’d like John Butler and I to discuss, please send them over to us here.

CHEDDAR, SOMERSET – Over the past few weeks I’ve seen several veterans of the crypto space utter a similar refrain. Something to the tune of “We had a good run folks – I’ll see you in four years’ time.”

Like American elections, bitcoin’s price runs in four-year cycles. Or at least, it has thus far – it’s only 12 years old after all.

I’ve illustrated these cycles in the price chart below – it’s on a log scale (percentage movements are uniform) so the early price action when bitcoin was dirt cheap is visible. I should stress that the timing of the cycles is loose, and not exact.

I’ve also annotated the bitcoin ”halvening” events (where new bitcoin supply is reduced by half) which are likely key to the cycles themselves, as they occur roughly every four years. 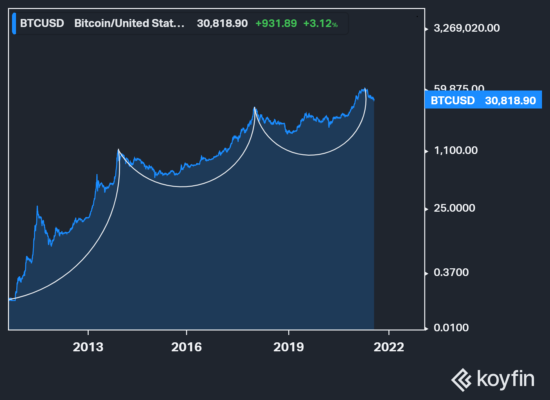 Note that while bitcoin began in 2009, it only started being traded on exchanges in 2010, so there isn’t any price data for the first year of the 2009-2013 cycle
Source: Koyfin

Some folks believe that this latest bull-cycle has run its course – that $64k was the top, and we’ll need to wait until next cycle (after halvening #4 due in 2024) before we see it’s like again.

The problem (and the opportunity for investors) is, each cycle is greater than the one which came before it – but nobody knows how big, until it’s over.

If you look back to the 2013 period (not long after halvening #1), you can see there were two grand surges – first past $100, and then to $1000, before it was over. When the price started pulling back after the $100 level, plenty of folks thought that was the top of the market… and then by Christmas they were looking at a BTC price ten times higher.

Seeing the amount of bearish chatter coming from crypto veterans (“see you in four years” etc) and from “tradfi” (traditional finance) commentators, makes me think we may be in for a similar scenario this year. Markets rarely do what they’re expected to, when they’re expected to, so I’m leaning on the bullish side for BTC right now, despite its fall from the heady heights of months past.

To be clear, I’m not expecting a 10x all time high increase – $640,000 BTC by Christmas seems a little extreme, even for me (though not so much for this guy).

But I can imagine bitcoin putting in a final hurrah for the cycle and reaching a new all-time high if the tech sector regains its stamina and starts running hot again (possibly caused by new lockdowns?).

What might bring positive sentiment to the space again, you ask. Well, there’s a coming catalyst for bitcoin due this November which I’m keeping a close eye on. It’s similar to a catalyst which occurred in July 2017, and BTC rallied 50% the week following. Five months later, it would be 500% higher…

But more on that tomorrow.

In the meantime, I suggest you take a look at this – for as nasty as some of the price action has been recently, crypto isn’t going anywhere – and there are many fortunes to to be found in its future.