There are two looming sources of political instability that could lead to market volatility in the next month. The first is clearly the US elections. The second is what happens after the US elections. If I’m right, the aftermath of the US elections will see the world’s attention return to Europe and Deutsche Bank. Cue the next crisis.

But let’s back up

There may be another, much more serious crisis before then. Let’s call it the American coup.

My colleague Jim Rickards at Strategic Intelligence tweeted something overnight that shocked me. By the way, Southbank Investment Research no longer publishes Jim’s newsletter. It’s published by Agora Financial, a separate publishing company. I read Jim’s letter, though, because it’s an outside perspective on global currency and capital markets.

And right now, that perspective is essential. For example, the mainstream media here in the UK would have you believe that the election of Hillary Clinton is now a certainty, following the publication of lewd remarks made by Donald Trump. Don’t be so sure. And check out Jim’s tweet from last night. 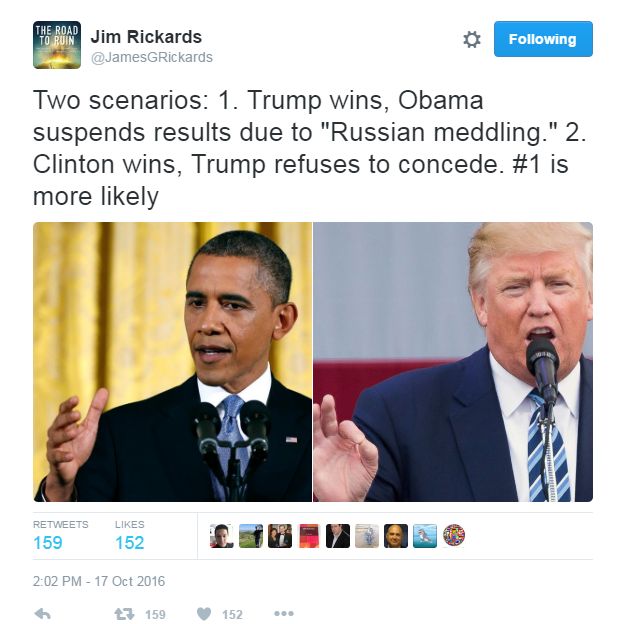 Trump has said publically that he believes the election results are rigged. Democrats believe Trump is colluding with Vladimir Putin and WikiLeaks to undermine the legitimacy of Hillary Clinton by publishing thousands of emails, some of which could prove damaging. Or, even worse, that Putin is tampering with the American election to undermine political stability in the US.

The stakes couldn’t be higher

Say Trump shocks the world the way Brexit shocked Downing Street. Is it possible that President Obama could suspect, reject, or invalidate the results based on “Russian meddling”? Or take the other scenario, where Trump and his supporters claim fraud. What recourse would they have?

The second scenario is likely to be less damaging. But it depends on how big the margin of victory is for Clinton. If it’s a narrow win, allegations of fraud will be more serious because it will have influenced the outcome of the election. If it’s a landslide for Hillary – the narrative now being put forward by the media – Trump and his supporters are likely to melt away quickly.

The first scenario is an absolute constitutional and geopolitical nightmare. If you were the head of the KGB and drawing up a plan for how to sow discontent and weakness in your main strategic adversary, you could hardly draw up a better one. Precipitate a crisis in the peaceful transition of power, for which there is no legal precedent to rely on for resolution.

If you think that’s the stuff of spy novels, maybe you’re right. But if you haven’t noticed, we’re living in a pretty fluid world. The world’s major superpower, the United States, has led from behind for the last eight years. The result is chaos in the Middle East and a disintegrating European Union. Could the US disintegrate too? Is it on the brink, ready to be pushed?

Let’s take note of the evidence. You have a well-armed society. You have a society in which trust in the police and law enforcement in general is at an all-time low. You have a sharply divided electorate, half of which appears to support an unpredictable candidate who’s beyond the control of the establishment (and apparently has no self-control either).

About the only institution left in the United States that enjoys widespread public support is the military. Can you imagine a scenario in the US where the president nullifies an election result, based on Russian meddling, and then is himself replaced with military leadership until constitutional order can be restored? I can. And it terrifies me.

It’s hard to imagine the adults in the room would turn American democracy into a farce. But then, these are the same people who’ve racked up $20 trillion in debt and driven the entire country into a strategic ditch. If your portfolio isn’t stress-tested against the prospect of a dollar crisis, you still have time. But not much.

In the meantime, what about here in the UK?

Inflation ran at 1% in September according to figures from the Office for National Statistics. Is this the beginning of the much anticipated sell-off in gilts? Rising-inflation expectations usually do cause people to sell bonds. You don’t want to hold a fixed-income security when inflation gets out of the bag.

There’s a lot of room to move up. But a much bigger move up in gilts signals either much higher inflation or a much weaker pound. Or a product of both.

What’s fair value on the pound? It depends on who you ask. Ben Broadbent from the Bank of England says a flexible pound is a kind of “shock absorber” for the economy. It allows adjustments that can correct imbalances and restore competitiveness to the economy. In theory.

In reality, a further fall in the pound from here would reflect massive anxiety about the future of British trade relations with the EU. It would also price in the reality of a country with a large current account deficit and a reliance on capital flows into the property and financial markets. But there’s a flip side.

The flip side is that the weaker the pound gets, the cheaper British assets get for cashed up foreigners. What does that mean for property and stocks? I have my thoughts. Send me yours to [email protected] and we’ll compare notes tomorrow.