Let’s dive straight into part two of our look at the world of Trumpenomics.

Remember, this isn’t necessarily confined to what Donald Trump is going to do. But it does reflect the key trends we need to understand while he’s in office.

Yesterday we looked at rising inflation. Today I want to take a look at the second key trend – rising rates.

I also want to give you a pretty simple way of understanding where you need to put your money as a result of these new trends, courtesy of The Fleet Street Letter’s Charlie Morris.

Because you do need to have a plan. Sitting on your hands and hoping for the best is a mistake in my view.

The first thing you need to understand about what’s happening in the financial markets is this: rising inflation is bad for bonds. If you own a bond yielding 1% when inflation is zero, you still make a real return of 1% a year. If inflation spikes to 3%, you make a loss of 2% a year.

That’s what makes bonds an unattractive prospect when inflation is rising.

With inflation expectations picking up across the world, people are selling bonds hand over fist. That selling pressure brings the price down and the bond yield up.

That’s how we end up with both rising inflation expectations and rising rates. Which is exactly what we’re seeing right now. As Ambrose Evans-Pritchard reported in The Telegraph yesterday:

The moves [out of bonds] have been dramatic. The SPDR dollar fund of US Treasuries with maturities over 10 years has crashed 6.39pc. Its equivalent for the eurozone is down 3.83pc, and cumulatively down 9pc over the last three months.

JP Morgan’s emerging market bond fund has dropped by 6pc, and Pimco’s local government variant is down 7pc. Investors that gobbled up a AAA-rated 70-year bond issued by Austria in late October have already lost over 6pc in paper terms.

It remains to be seen whether this is a trend that’s going to keep running. It may fizzle out. It could certainly pause for breath. But it certainly feels like a new reality we’re going to have to invest for.

For instance, Jeffrey Gundlach, a bond analyst who predicted a Trump win, believes yields on ten-year Treasuries could spike to 6% in the next four to five years, according to a Barron’s report. Given yields hit a multi-decade low of close to 1.6% over the summer, that’d be a major move that would shake the foundations of the monetary system.

We’ll look at what that would mean for the bond market – and government spending as a whole – another day. Today, let’s stick to what you can do about it.

How to invest when inflation and rates are rising

The first thing to keep in mind is that if you’re an active investor looking to make money from the markets – and I’m going to assume you are – you need to acknowledge when the key trends reverse and act accordingly.

This is one such time.

For the last 30 years, bond yields have been falling. And for the last five, inflation has been doing the same. If both of those trends have now reversed, as all the signs indicate, you need to change with them.

It’s not necessarily easy to do that. But the best part of my job is that I work with incredibly experienced financial experts who can help guide you with advice and insights you won’t find anywhere else. People like Charlie Morris, Tim Price and Eoin Treacy. (By the way, next week we’re holding our annual on-camera in-house roundtable on what to do with your money next year, so look out for that.)

For instance, The Fleet Street Letter’s Charlie Morris has been preparing his readers for this scenario for a while now. At our conference earlier in the year, he outlined a “money map” to help understand where you need to position your wealth.

Instead of geographic coordinates, the lines on this map chart the two trends we’ve been discussing: inflation and rates. Understand where they’re going and you’ll see where your money should be: 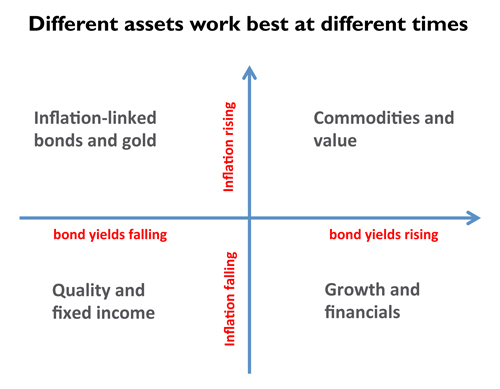 There are two ideas working in tandem here. One is what’s happening in the world, the other is your response to it. It’s a surprisingly elegant way of analysing the world and figuring out what to actually do with your money.

For most of the past three years, the world has been squarely in the bottom left quadrant: bond yields have been falling and so has inflation (the blue axes and red writing). That’s an environment you’d expect quality stocks and fixed income to perform well.

But where are we going next? Charlie believes that bond yields are going to start rising (look to Japan for leadership) and inflation will pick up. That starts to move us towards the top right quadrant. If that’s the case, he’d expect commodities and value to perform.

The key, though, as Charlie pointed out, is not to be in the wrong place. That means if the conditions are top right… you don’t want to be bottom left.

And it’s not necessarily a case of moving all your money into the corresponding quadrant. It’s more how much of your portfolio you allocate. You want to have a high exposure to areas that are likely to outperform in the conditions and reduce exposure to areas likely to underperform.

Charlie has a variety of recommendations for each quadrant in The Fleet Street Letter portfolio. But he’s concentrated more of his trades in the top right: commodities and value.

This is the kind of idea that demonstrates how valuable it is to have Charlie on your side. He’s great at combining macro analysis with specific and actionable investment advice. Which is of course the whole point of our business: understand what’s happening in the world and use that understanding to help you protect and grow your money.

Over to you – send me your questions, queries, feedback and criticisms to [email protected]. If you want something clarifying about Charlie’s “money map” or something I’ve said today doesn’t quite click, get in touch. I’ll do my best to get back to you.

Lots of correspondence in the mailbag this week. As usual, thank you to everyone who wrote it. One particular note caught my eye, as it made a similar point to several other people:

In your latest Capital and Conflict email you wrote:

“Or to put it another way: there’s the “reality” the establishment sees in the data (and bases its decisions on)… and the “reality” of people’s lives, which they vote on.”

I agree with you but I think there is probably another twist to it. The establishment manipulates the data to convince the people that they are succeeding and then starts to believe their own manipulated figures.

In the USA and in the UK how many people are there that don’t have an income from a paid job but who are not in the official unemployment figures? I suspect the number is quite large. Add to that another group who have a paid job but the income they receive from it is not enough to support them even in a very frugal lifestyle. Finally add in those who are drowning in debt. The lives of these three groups are a significant part of reality but don’t appear anywhere in the data.

I completely agree. Arguably that’s another way of saying the same thing – the data and the reality don’t match at all. That’s most likely because the data measures the wrong thing or is falsified to protect those in power. It’s just another way in which there’s a chasm between the establishment and the voters. The larger that chasm gets, the more angry and unpredictable things become.

By the way, that’s the whole point of democracy. It’s a way of the electorate signalling its displeasure at the world without resorting to violence and revolution.

No matter how extreme the media brands an election result, it’s still several orders of magnitude less extreme than the violent overthrow of the state. It’s a signal of political creative destruction.