The next decade’s most important chart

The next decade’s most important chart

Commodities are on the move. Ignore them at your regret. They’re the most promising way to make money over the next ten years. Today we look into what has me so convinced.

It’s all down to the most important chart for the coming decade. Bond fund manager Jeffrey Gundlach pointed it out a few weeks ago. 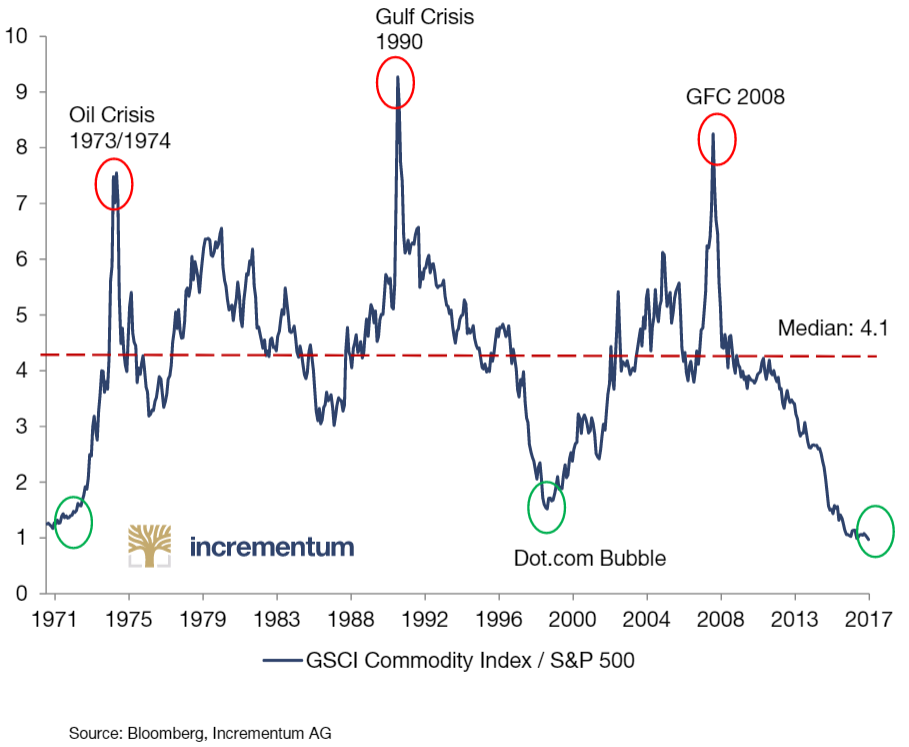 As you can see, the cycle is capped off by some sort of crisis each time. And the valuation hasn’t been so low going back 50 years.

This suggests we’re in for some combination of a stockmarket crash and/or commodity comeback.

The trouble is, that doesn’t narrow things down terribly much. Except to say it’s a good time to own commodities rather than stocks. (We’ll get to commodity stocks in a second.)

So what will the world look like if the worm turns and the line reverts to the mean?

One scenario is that we see inflation pop, pushing up commodities but hollowing out stocks’ returns. Or the stockmarket bubble could pop, especially in overvalued tech stocks, much like in 2000. Real world commodities could be left comparatively better off.

By the way, there are signs the commodity cycle is already starting to turn up.

Take palladium for example. It was the best performing commodity of 2017. Up 55% as inventory at the New York Mercantile Exchange hit long-term lows. Environmental standards for cars and China’s consumer boom have been sucking up vast mountains of the stuff.

If you like the idea of trading political risk, consider that about 80% of palladium and an even higher share of its brother platinum are mined in just two countries – South Africa and Russia. Neither are making political headlines for good reasons right now.

It seems palladium is the early mover, highlighting the gains on offer. But what about other commodities?

The chart above shows commodities relative to stocks. You’re perfectly aware of stockmarket highs. But what about commodities themselves? The numerator in the chart is the Goldman Sachs Commodity Index (GSCI). The diversified basket of various commodities has tumbled to extraordinary low levels:

A recovery to 2007 highs entails an enormous amount of gains across the commodity sector.

But actually owning commodities has always been a pain for individual investors. And our pain is the institutional investor’s gain. Goldman Sachs is famous for its shady warehouse dealings to manipulate markets.

If you want to own the physical metal, premiums above spot prices are enormous. And the price of many metals fall well short when you try to sell. Platinum dealers pay around 6% below spot. Especially for smaller denominations. Firms like BullionVault are improving the deal though.

What about exchange-traded funds (ETFs)? This chart shows the palladium ETF PALL from the New York Stock Exchange. It’s doubled since 2016’s low:

The London Stock Exchange’s SPDM ETF, priced in pounds, looks much the same. So it’s certainly possible to profit nicely from the metals themselves without getting near them.

But there’s a better way.

Commodity stocks are even better than commodities

Most commodity speculators prefer stocks. And yes, if you’re investing in commodities, you’re almost certainly speculating. The cyclical nature of the business rarely makes “buy and hold” the way to go.

Let’s take a look at what palladium’s price surge did for stocks. There aren’t many palladium-focused miners. Most of the stuff is mined by major diversified companies. But picking the right stock can generate extraordinary gains. Ivanhoe Mines’ share price rose seven-fold since 2016, for example.

The risks in the small-cap commodity space match the opportunities. But that doesn’t mean the risk-averse investor need look away from commodity stocks altogether. That’s the mistake of institutional money according to one investment legend. He says larger commodity stocks are very much out of favour.

Jeremy Grantham first explained why you should buy commodity stocks just over a year ago in Barron’s magazine:

The S&P 500’s exposure to energy and metals companies has dropped by more than 50% over the last few years, and the same is true of the MSCI All Country World Index. Those investing with a value bias may be particularly underexposed to resource equities, as value managers tend to be especially averse to the risks posed by commodity investing.

When valuations relative to the market have been in the cheapest quintile of history, the commodity producers have outperformed the broad market by almost 7% per annum over the next five years on average. Given that valuations continue to hover around all-time lows, at this time resource equities are firmly entrenched in the cheapest quintile of history relative to the broad market.

A commodity price boom generating 7% outperformance for commodity stocks sounds rather juicy. It could deliver the mean reversion in the chart we discussed up top.

Grantham also claims that the volatility of commodities and commodity stocks keeps many institutional investors away. Pension funds can’t stomach a plunging oil price, for example. This only enhances the eventual returns for those who can hold on. Ordinary investors like us. But you still have to stomach the volatility.

The point here is that the commodity scene is ripe and the potential gains very large.

To be perfectly honest, this is the first time I’ve considered jumping into the stockmarket since 2009. But there’s a big caveat.

The dominant player in the commodity world is of course oil. It makes up by far the largest chunk of the GSCI – about a 40%.

The price jumped 2% yesterday to over $61. We last saw this level in 2014. But I’m not convinced the gains will last.

Nobody quite knows what to make of the world’s key oil supplier Saudi Arabia. The country is experiencing some fascinating political turmoil. It’s also trying to diversify… into US oil fields. And the national leaders want to list their prize oil company on a major stock exchange. In summary, it’s a confusing mess.

Political trouble in Venezuela and the protests in Iran could encourage the current rally in the oil price.

But in the end, there seems to be plenty of oil around to pick up any slack. Russia has taken over as China’s number one supplier of oil. American production could surpass the 1970s record high soon.

In other words, oil supply could hold commodity prices back. At least for a while.

Today is your last day

If you thought bitcoin’s profits were extreme, you need to see this. And today is your last day to get your name down.

Crypto Profits Extreme aims to get investors into the up and coming cryptocurrencies. On the ground floor, before they go mainstream.

Long-time crypto expert Sam Volkering will be identifying which cryptocurrencies to buy before they even launch. Imagine buying bitcoin when it was worth next to nothing.

Of course, not all cryptocurrencies have bitcoin’s potential. But the up and coming coins do have the ability to usurp bitcoin by improving on its flaws or setting themselves apart in some way.

By choosing the right ones, and getting in at the very beginning, Sam’s help could make you a crypto-fortune.

If you want in on the gains, you need to find out more.