This is the woman the establishment fears

This is the woman the establishment fears

So here we are again dear reader, at the end of another wild week.

It’s been a barnstormer for precious metals, as we’ve been writing about in recent days. We’re also seeing further signs of exhaustion in the tech sector, which Charlie Morris thinks is set to continue.

The Nasdaq 100, full of tech companies that have boomed amid the lockdown, looks like it’ll be ending the week flat. If tech really is running out of juice, that dip on the top right is set to become a lot deeper: 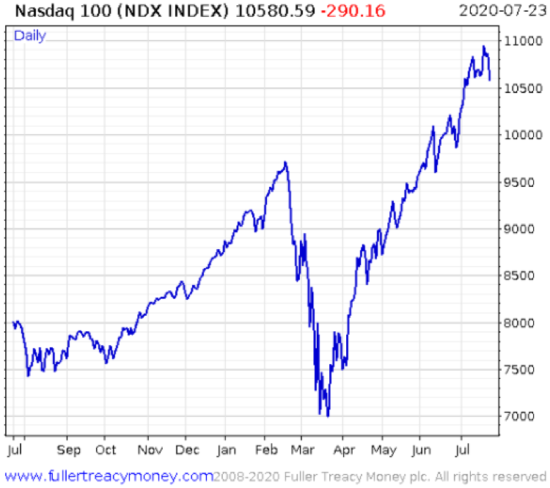 As Charlie said yesterday evening, “Tech is done. It is time for the real assets to shine.”

With the gold price less than a dollar away from its all-time high (in USD) at the time of writing, it’s easy to just focus on the gold price, but there’s one story about the shiny stuff I haven’t got around to writing to you this week.

It’s about a very interesting lady by the name of Judy Shelton. You may well have seen her name crop up in the financial press from time to time over the past couple years. She’s an economist who believes in sound money, which makes her an extreme outlier by establishment standards.

She’s a fan of a gold standard, has proposed the creation of a new Bretton Woods system (the gold-based international money system that existed between nations from 1944-71), has questioned the need for central banks in the first place, and argued that if central banks must target inflation, they should target 0% inflation and nothing more.

Her approach to finance led her to accurately predict the collapse of the Soviet Union in the late 80s. Her contemporaries meanwhile – prominent Western economists – were as shocked as the commies when the Berlin Wall fell.

In short, she’s a fascinating character.

Now, Shelton was nominated by Donald Trump to join the Federal Reserve Board as a governor. This means that she would get a vote on the direction interest rates and money printing in the US would go. It’s a vote – she wouldn’t be the one in charge, like Jerome Powell. She wouldn’t be able to suddenly reinstate a gold standard if she wanted to.

But even the possibility of a dissenting voice, a different approach, the very thought of gold having anything to do with money, is utterly unacceptable for an establishment hooked on monetary abandon. And that means that all the stops are being pulled out to try and prevent her making it to governor status.

The sheer condescension this woman has faced for daring to have a view contrary to the mainstream financial types who got us into all of this mess is extraordinary. All manner of articles have been published from journos and establishment figures alike, presenting her as a nutcase, attacking her character, and accusing her of being ethically compromised. Her own Wikipedia page has been edited to the point that it reads like a political hit piece. Context regarding this individual has been declared journalistically illegal.

The great Jim Grant, a historian of contemporary monetary history who has been in the game of monitoring the Federal Reserve for over 40 years, says that he has never seen such backlash against a Fed nominee in his life.

Out come the big guns. Echoing out from an ivory tower in Washington, this is what establishment fear looks like: 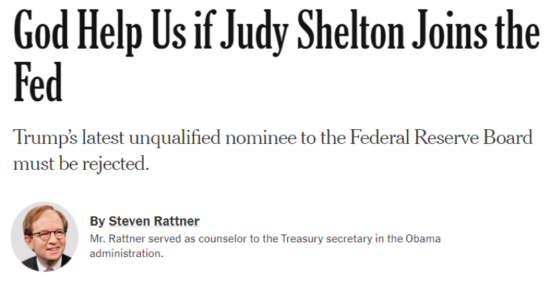 We’re now seeing calls imploring Republican senators to join Democrat senators in voting against the nomination of their president – “Set aside party politics and do the right thing for the good of the country”, etc. Grant Williams put it perfectly yesterday:

The alarm amongst the establishment around ‘sound money’ & the potential placing of constraint on the wanton (and, thanks to their actions, necessary) debauchment of fiat currency tells you all you need to know.

The reaction to Shelton is almost as interesting as the positions she represents. She’s a bit like Trump in that respect – the presence of an individual revealing the nature of a crowd.

Whether Shelton gets into the Fed or not, whatever happens next will be illustrative of the environment we are living in.

She gets my vote anyhow. Even if I wasn’t a precious metals nut, the Fed is in dire need of some diversity of opinion. And the longer she sticks around, the more she reveals about the nature of her critics, who cannot conceive of a world with monetary restraint.

But that’s all for this week – I’ll be back again on Monday. In the meantime, I suggest you take a look at the event we’ve got tee’d up for next week – this project has been a long time in the works, and there’s all manner of goodies awaiting those who sign up for it.