The French central bank on fire… fork lifts rammed into banks and the ministry of finance… brutal fights between riot police and protestors… cars set ablaze… and yet the market is still willing to lend to the French government at 0.7%. What does the market know that we don’t?

It’ll be a short note from me today – I picked up the flu on Saturday and my brain is going at 5 miles an hour. But the situation in France is worth your attention.

The yellow vest protests began a couple months ago, and have since spread across France and Europe, even showing up in London over the weekend. 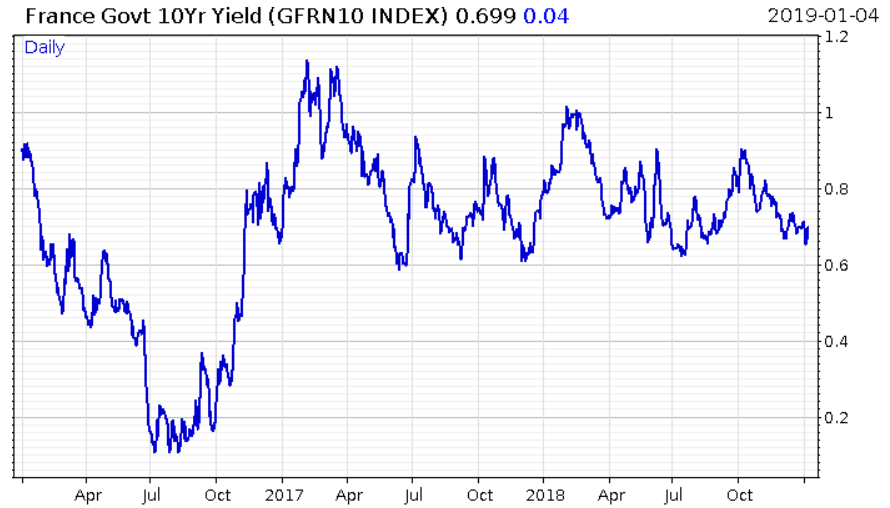 However, despite the violent unrest in France, the yield on the French ten-year bond remains at 0.7%. And that’s just the ten-year. French bonds up to four years in duration still have negative yields. Would you pay to lend to the French government when it’s resorting to tear gas and rubber bullets to use against its own citizens?

Of course, the European Central Bank, through quantitative easing (QE), has been willing to lend to the French at any rate for years, which no doubt is the cause of these negative yields. But QE stopped in December – there is no longer any wall of money keeping yields down. And with such graphic domestic chaos going on in the background, it begs the question why investors have yet to start demanding a higher return for owning French debt.

The mainstream press has paid a blind eye to the Gilet Jaunes riots in recent days, which may have something to do with the lack of action in the bond market. But if the yellow vests continue, it’s only a matter of time before markets demand much higher yield to account for the political risk. Such an event is likely to occur all at once, just as it did to Italy last year.

Speaking of which, Italy is another argument for higher French yields this year. French banks are huge owners of Italian debt, and when that debt loses value, those banks are in trouble. And a banking system in need of a bailout does not bode well for government finances.