The potential of trillions

The potential of trillions

Yesterday we finished Capital & Conflict by describing how badly discredited the anti-immigration justification for Brexit is. The figures and the economic justification are simply wrong.

But the real reason to favour Brexit is plastered all over the news this morning. The EU’s leadership is on a drive for all the things Brexiteers warned about. The end of vetos, the introduction of a joint military force, and an awesomely powerful set of EU politicians to determine foreign and financial policy without recourse for national governments.

The vision laid out by your president Jean-Claude Junker in his State of the Union speech is enough to drive many more Europeans to euroscepticism. If he had actually spoken about the state of the union instead of his dream for the union, things would’ve sounded different.

In anticipation of the backlash, which will be far more interesting than the speech itself, let’s look at something more important to your financial wellbeing for today.

Deutsche Bank has put together the most comprehensive, useful and insightful summary of central bank quantitative easing to date.

It offers a truly remarkable conclusion which nobody else seems to point out. In fact, my conclusion is the precise opposite of everyone else who looks at the table it’s published, as shown on the website Zero Hedge. 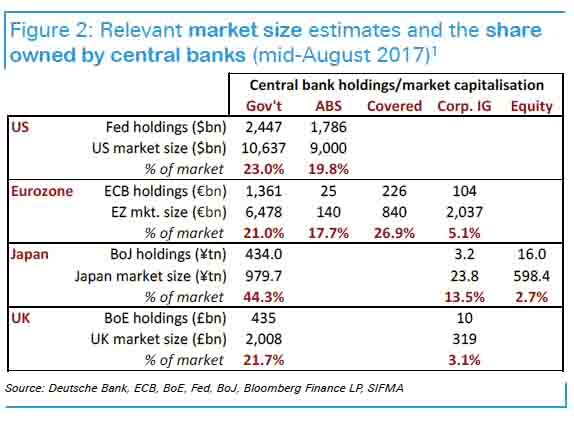 The table shows how different central banks have kept busy the last few years. The US’s Federal Reserve, the eurozone’s European Central Bank (ECB), Japan’s Bank of Japan (BoJ) and the UK’s Bank of England (BoE) are all profiled. The table shows what they bought, how much of it, and what proportion of the total market that amount is.

The asset classes they purchased are government bonds; asset-backed securities (ABS), like the mortgage bonds which blew up during the financial crisis; covered bonds, which are loans that have a claim on stable collateral; investment-grade (highly rated) corporate bonds; and equities (including exchange-traded funds, or ETFs). The figures are for mid-August.

For example, the Federal Reserve has bought two and a half trillion dollars of government bonds, about 23% of the total outstanding. It also holds an enormous amount of mortgage-backed securities. But the Americans haven’t bought corporate bonds or stocks. Although in other news the Swiss National Bank has bought vast amounts of US shares.

Back to the table. The ECB is much more diversified across all the asset classes except stocks. It’s hitting legislated limits on how many bonds it can buy from certain nations including Germany, Portugal and Belgium.

Japan is the terrifying outlier. The Japanese central bank owns 44% of its government’s debt, 13.5% of the corporate bond market and 2.7% of shares. But that’s extremely misleading because the actual area of intervention by the BoJ is in the Japanese equity ETF market. It owns 75% of those, and rising! Also, the focus of these ETFs tends to be in the bigger index stocks, so the impact of buying is uneven.

Here in the UK, the Bank of England has been comparatively moderate, owning 21.7% of our national debt and just 3.1% of corporate bonds.

The obvious analysis based on the table above is that central bankers are running out of space. Their ammunition in the war on deflation is buying stuff. But there isn’t much stuff left to buy. At least not without reaching the limits of common sense, the law, economic law and credibility.

At some point, they are monetising government deficits, manipulating the stock and bond market to the point where they own the lot and completely undermine credibility of both markets entirely. The price of assets will not convey any information other than central bank action. The result is a world I will discuss in my speech at our conference on 6 October. If you haven’t signed up to listen to the likes of MEP Daniel Hannan and renowned investors Charlie Morris and Tim Price, you can do so here.

Analysts are terrified about the moment when monetary policy is exhausted. Either because it has no effect, or because it reaches the limits of what can be bought. The turning point identified by central bank watchers is in 2018, when the monetary manipulators will supposedly begin manipulating money less and less.

Read between the numbers

The real message in the chart is precisely the opposite conclusion to what commentators focus on. Central bankers have a huge amount of room to move. For example, given the precedent of Japan, the Federal Reserve could double its holdings of government bonds.

But focus on the blank spaces instead of the filled ones. The figures are hiding the important information there.

The Federal Reserve hasn’t event touched its enormous corporate bond market and stockmarket. Investment-grade corporate bonds are issued at a rate of more than a trillion US dollars a year, leaving a vast stock of corporate bonds the Fed could mop up. Buying a tiny per cent of the enormous US equity market could add another trillion or so in the US and eurozone. The UK has the biggest potential of all, barely monetising any of its vast financial markets.

The idea that central bankers are running up against constraints is simply wrong. But articles about the restrictions are everywhere. Especially on the ECB’s limit on buying government bonds. But that limit is imposed by governments. What are the chances it will be changed when the change benefits governments?

The Financial Times reports that 30 US companies own $800 billion in fixed income investments. They’re trying to diversify their hoard of cash to keep it out of risky banks and earning some return.

But the amount of cash is so large it’s become a market risk. These are companies who are supposed to use their cash, not hoard it like a fund. If they sell, there’ll be trouble. Not only that, but they own 5% of the corporate bond market – the debt of their competitors.

Another problem is the financial position of central banks. What if the assets they own plunge in price, leaving the entire institution under water? We don’t even know if it’s an important question to ask, that’s how obscure the issue is.