A grey rhino in the bank of the realm

A grey rhino in the bank of the realm

SODERMALM, STOCKHOLM – There’s not even a flicker of hesitation in their eyes.

Unflinching, unconscious of the awkward guarded manoeuvres now practiced in blighty… the Swedes squeeze past you on a supermarket shopping aisle.

It’s strange how something that was so ordinary pre-coronavirus, like being comfortable passing somebody at the shops, now feels wrong.

For us Brits, normality is no longer the norm; we’re left with the weird. But for the Swedes, normality is the norm – and I must confess, it’s very refreshing.

I had forgotten what it felt like to stand on a busy high street. Not a mask in sight – folks of all ages, mothers pushing prams, all milling through the coffee shops and clothing stores just as it used to be back in the UK.

Who would have thought Sweden was the land of the free? They do like VAT so much over here they call it “moms” though. And considering their approach to alcohol, I’m unsure if the title “home of the brave” applies…

All joshing aside, it’s interesting to see how the Swedish stockmarket has behaved this year, considering their no-lockdown approach.

This is the OMX 30, Sweden’s benchmark index. It’s the top 30 stocks by market cap listed on the Stockholm Stock Exchange containing the likes of Volvo, Ericsson, and AstraZeneca. And it’s just regained the high it made before the crash in March: 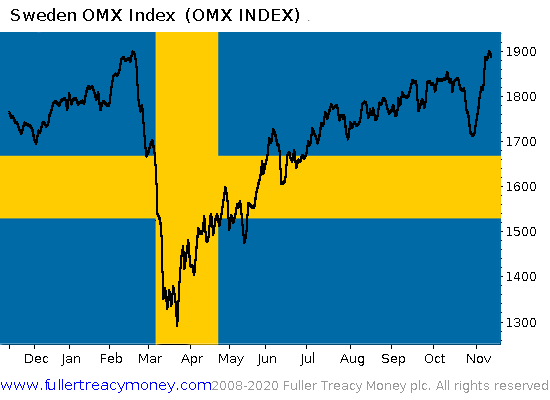 It’s certainly looking fresher than the FTSE, that’s for sure. Could this be testament to the Swedes opting not to nuke their own economy when the virus arrived?

Or could this be the formation of the infamous “double top” chart pattern, where the market rejects a new high twice, and then slumps into misery afterwards?

During the lockdown period we saw a gigantic rally in internet stocks as they were effectively the only game in town – the only companies that could grow aggressively through the chaos.

But clearly, somebody was also putting their money into Swedish stocks at the same time (though not nearly as aggressively). It makes sense – Swedish companies have been able to function much better than those in other nations. But now that the vaccine narrative has arrived, I wonder if some of the speculative money will leave Swedish stocks, just as tech stocks as seeing a drawdown now.

We’ll have to wait and see. But I do believe the decision of the Swedes to remain open for business will see their economy outperform locked down nations in the fullness of time, and that should be reflected in their stockmarket.

But there is an elephant in the room here. Or to be slightly more specific, a “grey rhino”: a financial risk that’s massive and obvious but often ignored (as opposed to the unknowable “black swan” risk).

And that grey rhino is the Realmbank – or to use its Swedish name, the Riksbank. Sweden’s central bank is the oldest in the world, and has developed a reputation in recent years for being utterly ruthless its mission to create inflation.

In the wake of the credit crisis, in the spirit of innovation and in keeping with its historical prestige, the Riksbank wondered what would happen if they gave negative interest rates a go.

It was the first central bank to try waterboarding their economy in this way. And when nothing obvious appeared to break as a result, these “enhanced stimulus techniques” were given the green light to be employed again in the future.

And employ them in the future they did. In the wake of the sovereign debt crisis, out came the negative rates once again – this time for five years. From 2014 until late last year, the Riksbank held the Swedish economy’s head underwater. It only managed to get a gasp of air around Christmas time, when the Riksbank turned off the negative interest rate taps and was kind enough to set rates at zero instead. 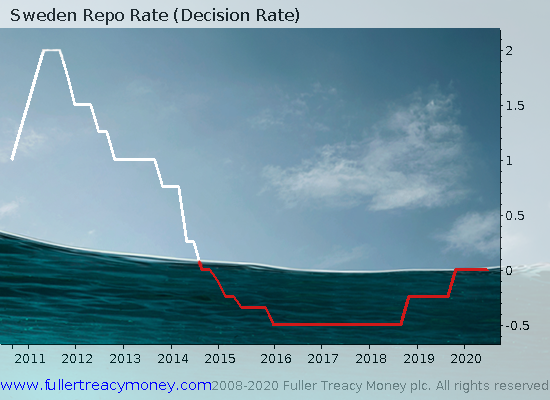 … and then the coronavirus pandemic hit. If the Swedes had locked down their economy, and the Riksbank wanted to stimulate through it… then I dread to think what they might have tried.

The Riksbank were running a Quantitative Easing program during the waterboarding too, by the way. And it’s in the middle of trialling its own digital currency for some time: the “E-krona”, which would make imposing negative interest rates directly upon savers (rather than indirectly via the banks) a lot easier.

Sweden is one of the most cashless societies in Europe (I’ve yet to even see a Swedish banknote) so it wouldn’t be too hard to roll out a state-administered digital currency there, compared to an area like the Eurozone where banknotes are heavily used and hoarded.

The first to central banking… the first to negative interest rates… will the Riksbank be the first to create a sovereign digital currency? They’re certainly aiming for it.

And while the Swedish economy isn’t locked down now, if the E-Krona becomes popular, the Swedish financial system certainly will be.

Such “innovation” that the Riksbank brings to the table is what makes it a “grey rhino” for investors (not to mention to Swedish citizens) in my view. The great beast is not moving at the moment – but if it charges, you don’t want to be caught in its path. “Risk Bank” might be a better name for it.

PS Before I leave you for today, you should take a look at this. You know that Treasure Map I was talking about earlier this week, that could help lead you to riches no matter the investing environment? You can sign up for a chance to view it here.