Letters from a banana republic

Letters from a banana republic

Almost two years ago now, during my old job as a financial adviser, I attended an “annual masterclass” for fellow advisers. The event was held in a scenic location by a horse racing track in the Scottish countryside.

During these masterclasses, the financial advice network I worked under would introduce us to new services they wanted us to advise to our clients (that would make the network more money). This time, they were promoting a new investment service, which would allow the network’s chosen investment officer to make “tactical” short-term investment decisions with our clients’ money.

To illustrate the need for this service, the man presenting asked the audience if anyone in the room had predicted both Brexit and the election of Donald Trump. I was the only one to raise a hand, and was quite chuffed with myself at first. But then I realised the implications. Those in the room will have managed north of £100m, investing it all across the world. If they did not appreciate the political risk at play, could not imagine the strength of the adversary now challenging the status quo, the hard-earned money of their clients could be in trouble.

An old buddy of mine still in the industry informs me that the new service with tactical decision making has been thoroughly disappointing. The predictions of their nominated investment officer have not been up to snuff.

It’s incredible to consider that a year ago Europe was being portrayed as a pool of tranquillity relative to the political friction in the US and UK, a bastion of stability amid the mayhem elsewhere. Woe betide those who invested with such a view – European stockmarkets got wrecked this year (especially during Bloody October, as Nick Hubble predicted).

Speaking of losses – which countries do you think yielded positive stockmarket returns this year?

The table below, courtesy of Charlie Bilello on Twitter, paints a rather red picture of global equity returns. 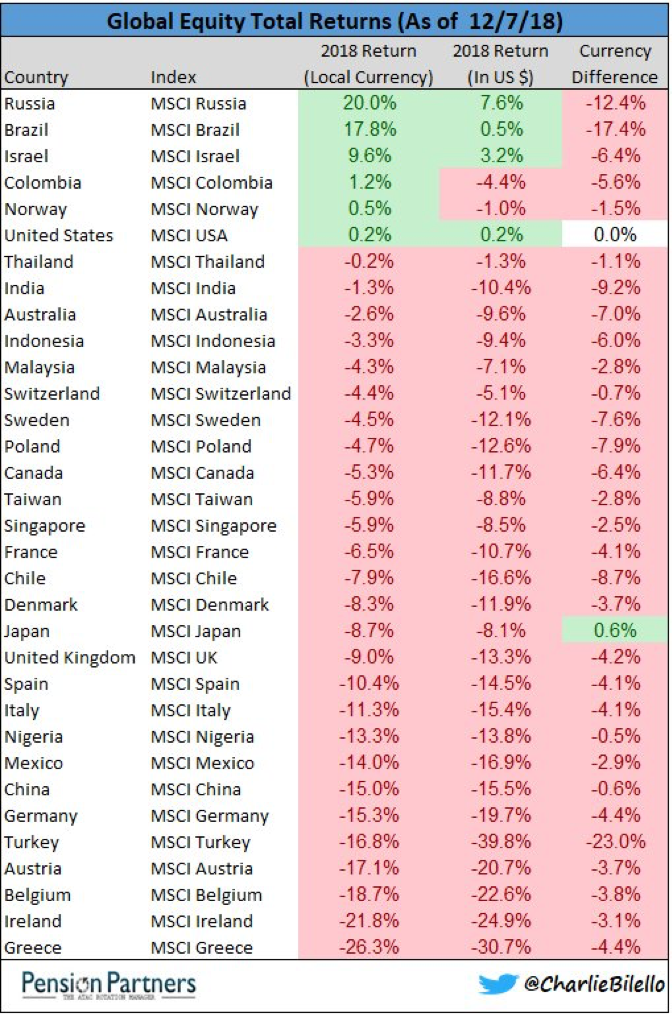 Whatever happened to the “global synchronised economic growth” everyone was on about in January? Hedge fund manager Ray Dalio said everybody holding cash rather than investing it was going to feel stupid…

He was half right. If you didn’t stay in cash, and went short instead, you’re probably feeling pretty smart right now. It’s been a good year for short-sellers. If you want to get in on the action, and ride the market into profit as it tumbles down the stairs, click here.

Letters from the editors

I asked a few of our editors what they made of the latest Brexit uproar, after Theresa May delayed the Brexit vote in parliament.

Nick Hubble’s response was dry: “Brexit? It’s a nightmare. UK wages increasing at the fastest point since 2008, unemployment just shy of its lowest rate since 1975. What a mess. We just can’t let this continue.”

In office but clearly not in power, and certainly not in control. Perhaps the most shambolic serving government in living memory. Not that we needed reminding, but there was never much sense in sending a Remainer to do a Leaver’s job. The worst outcome would be the Orwellian “People’s Vote” – which would damage trust in our politics for generations. If it were to come about though, Continuity Remainers should be careful what they wish for – behave like a banana republic, and UK assets will trade at a banana republic discount to legitimate democratic economies.

Charlie Morris over at The Fleet Street Letter was more optimistic:

Current events in parliament will be talked about for years to come. The only consensus seems to be against the Northern Irish backstop. President Emmanuel Macron has already threatened to trigger it so that French trawlers have access to UK waters. The Spanish want to interfere with Gibraltar, and so it goes on.

Rory Stewart MP, who wrote the excellent book The Places in Between about his walk across Afghanistan, is fighting for the deal that he doesn’t particularly like. It’s supposedly the only deal we have, as if a no-deal caused job losses and mayhem, the Conservative Party would be destroyed for a generation. A no-deal would be seen as irresponsible and reckless. That’s the other parliamentary consensus. No deal isn’t even a choice under consideration. At least it wasn’t, until now.

My personal view is that the risks of a no-deal are overstated. Any economic disruption will be short-lived. Goods will make it here, because European businesses have sold them to us. If they don’t, then European jobs will be threatened. I like to think that common sense will prevail. But then again, this is Europe (TIE).

There’s some festive cheer for you. Common sense will prevail? Let’s hope so Charlie.