To paraphrase Oscar Wilde, “We have really everything in common with America nowadays, except, of course, the stock market.”

If you’d looked at only the value of the S&P 500 last year, you wouldn’t have thought the country was in the midst of a pandemic. The opposite was true of the UK market.

US stocks stole the limelight in 2020. That’s not surprising, given that the S&P 500 appeared to shrug off the impact of the pandemic and rise 16%.

UK markets, meanwhile, had a miserable time – with the FTSE 100 posting its worst year since 2008. 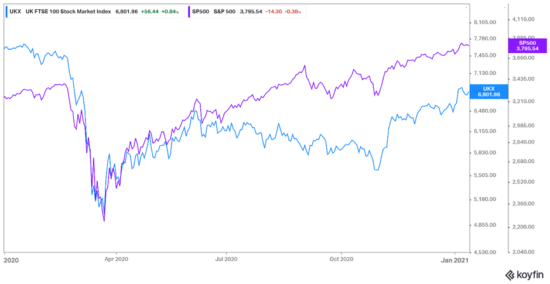 UK shares had quite a different year to their American counterparts
Source: Koyfin

But now it appears that times have changed for UK equities.

Looking at the FTSE 100 – which enjoyed its best start to the year ever – you could be forgiven for thinking that the pandemic was over and that we can all jump on flights to Spain again.

The fact that UK shares have shot out of the gates in 2021, just as the country enters a third national lockdown, serves as a pretty stark reminder that stock markets are forward looking – prices reflect what people think is going to happen, not what’s happening right now.

So what’s changed? And are markets getting ahead of themselves?

The vaccine, for a start. Pfizer’s announcement last October lit a fire under stock markets. People could imagine life returning to normal (or at least a new normal) once again. But that impacted all markets, so what UK-specific news explains the FTSE’s start to the year?

The most loved and loathed topic in British politics – Brexit

With a trade deal being agreed at the end of last year, this has put many investors at ease. In a recent survey, the Association of Investment Companies found that many investors see the trade deal as a watershed moment. Investors who have stood on the side-lines since 2016 may once again be ready to take the plunge.

Given that the UK market spent last year in the doldrums while the US market seemed to operate on its own plane of reality, you might be sceptical of this.

But what made 2020 such a rough time for UK shares might also be what allows them to take off this year.

If we pick apart the FTSE 100, there’s one big notable absence.

Unlike our neighbours across the pond, the UK lacks the kind of Big Tech names that shot upwards last year, unperturbed – and even encouraged – by pandemics and recessions.

There isn’t a British equivalent of Tesla (but if you think you’ve found one, please do let me know).

So what do we have?

Our fair share of banks, for a start: Barclays, NatWest, Lloyds, and HSBC, to name a few.

These are names we’re all familiar with. And frankly, none of them are particularly exciting.

None are promising to revolutionise the electric car market or huge social media companies. For the most part, they aren’t the kind of companies that are trying to shake up the way we travel or use our smartphones.

So why are some investors getting so excited about UK equities?

Because banks and energy companies are cyclical stocks – that is, stocks that tend to act as a bellwether for the entire economy.

When the economy is roaring, cyclical stocks ride high with it. But when there’s a downturn, they’re often the first to stumble off the cliff edge.

And you don’t need me to tell you that last year was a rough time for any company whose fortunes are tied to the wider economy.

With the dust kicked up over Brexit beginning to settle (at least for now) some big money investors are claiming that it’s time for the UK’s unloved equity market to take off.

According to a recent Association of Investment Companies survey, a fair few fund managers think that compared with other markets (particularly the US) UK shares are at attractive valuations.

This may be true – but it’s by no means a guarantee that it’s UK shares’ time to shine. Of course, if you alone believe that a stock is undervalued, then that doesn’t mean much. Plenty of other people need to think the same thing to start pushing the price up.

We’re not out of the woods yet

So British markets are on the up. Putting to bed concerns over the pandemic and Brexit could boost the big cyclical stocks that make up the FTSE.

But what could take the wind out of their sails?

Earlier this week I caught up with a former hedge fund manager and asked what they make of it all. Their answer was decidedly more cautious.

The market, they argued, is acting as though the vaccine rollout is going to go incredibly smoothly; that we’ll return to normality within a year and everyone who’s been fortunate to save up over the past year will splash the cash, kick-starting the economy.

Just look at all the headlines in the news posing the possibility of the “roaring 2020s”, he said.

It’s not that UK shares aren’t going to recover, but that investors might be getting a bit giddy.

What do you think? Drop me a line here.