Over the pond, millennial militias are on the prowl. It’s patriotism run amok. They’re hunting down, brutalising and bankrupting all those suspected of committing the most anti-American activity of them all…

No, I’m not talking about flag burning. Or refusing to stand for the Star-Spangled Banner. This is something much more grievous…

… shorting the US stock market.

Though The Big Short had considerable success in glamourising those bearishly inclined, the shiny veneer has worn off. Short-sellers are no longer titans to be feared, but targets to be squeezed….

We mentioned the rally in video game retailer GameStop ($GME) orchestrated by the WallStreetBets Reddit forum briefly in Wednesday’s note (The Abominable 20). The disruption caused and success reaped by this group of millennials in deliberately trying to trigger short-squeezes and thus bankrupt short sellers is a fascinating spectacle, which is now attracting significant press attention.

Sarah Ponczek at Bloomberg recently posted this great chart of how a portfolio of the most heavily shorted shares on the US stock market would have performed since 2008. When that line’s gone down, it’s been happy days for the short sellers, or “plungers”. Conversely, when that line has gone up, the bears have been put under pressure.

And when it’s gone up as much as THIS… 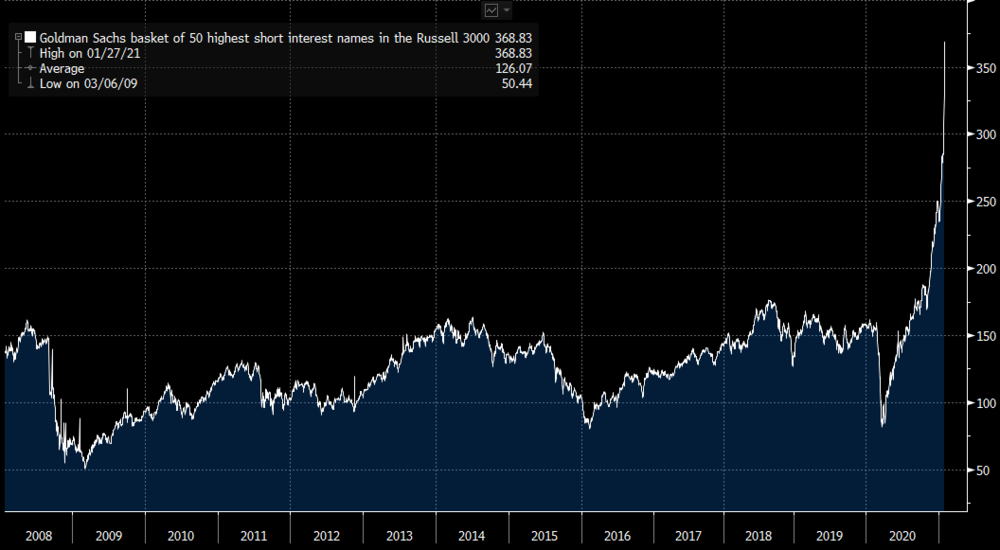 … You can only imagine what it must feel like to be a short seller right now. You have gone from merely being “wrong” to being a blasphemous heretic. There’s a Plunger’s Inquisition going on, led by a furious brigade of passionate youths on the internet, foaming at the mouth for your blood – and your money.

It’s a testament to how feverish this bull market has become that bears are no longer being bankrupted by their own investment decisions, but are now being pushed into it as punishment for even daring to be short, like some kind of financial euthanasia being meted out by the mob.

Then again, the stocks that have been bid up by the “activist investors” at WallStreetBets were down in the dumps when the pump began. The aforementioned GameStop, cinema chain AMC Entertainment ($AMC), BlackBerry ($BB), and Nokia ($NOK) had likely attracted shortsellers due to their poor recent performance.

The GameStop chart in particular is something to behold. Talk about a short squeeze: 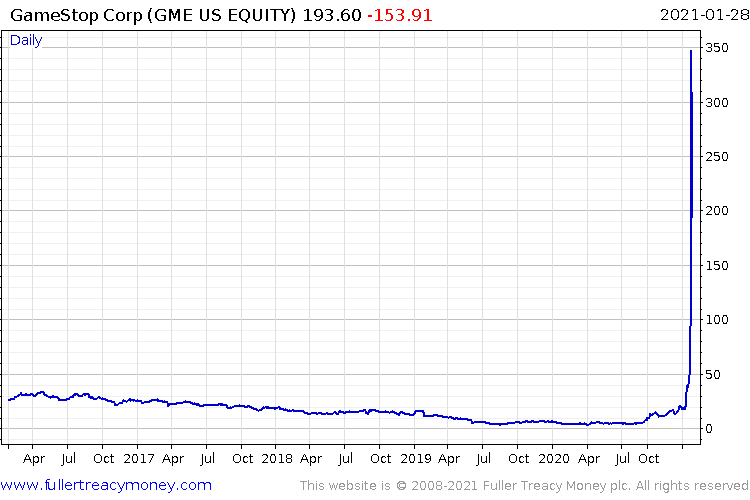 Some have noted that all of these stocks have one thing in common: these are companies which had their heyday when the elder millennials now were growing up. They would buy video games from GameStop (rather than downloading them), they could actually go watch a movie at an AMC entertainment cinema, and mobile phones made by Nokia and BlackBerry were all the rage. Could this all be a financial expression of millennial nostalgia?

It would be fitting. This generation is destined to become demographically dominant – to hold all the political and economic keys – but we haven’t seen that much muscle flexing from it yet in markets (or politics for that matter). This may well be a foreshadowing of events to come – “Occupy Wall Street”, but with actual teeth this time.

It should be noted however, that while the narrative is that the price action is being driven by the “little guy” righteously bankrupting billion-dollar predatory hedge funds, this entire phenomenon is still enriching the financial establishment. The relentless rise in speculation during lockdown is cutting fat cheques for the likes of Citadel (originally a hedge fund and now a major component of financial market structure), which earns money as an intermediary fulfilling trades for the likes of Robinhood – the trading app through which so many of these speculative bets have been placed. Citadel doubled its earnings last year, and its outlook as this trading mania continues is bright indeed: Wednesday made it to the history books for having the highest volume of call options ever traded in a day. So this isn’t exactly “the revenge of Main Street”…

What’s more, we must ask whether or not this price action is really being driven by the everyman. Jim Chanos, one of the most famous short sellers around today, commented a couple days back that he’s seeing shares in these wonder-companies being traded in blocks of 5,000 and 10,000. When you consider that some of these stocks are hitting triple-digit prices, it doesn’t seem all that likely that it’s your average millennial making those trades. I wouldn’t be at all surprised if larger players have been piling in after the youngsters have begun, and then letting the kids get the heat for it from the press.

With several retail brokerages now preventing users from buying more shares in GameStop as I write this (and in the case of Robinhood, there are reports of the company actually selling users’ holdings of the share without their consent), the affair is rapidly becoming explicitly political, with the likes of Senator Ted Cruz and Congresswoman Alexandria Ocasio-Cortez weighing in.

I note that the Financial Times wasted no time in accusing members of the WallStreetBets crowd of being members of the “Alt-Right” before retracting it, suggesting that there is plenty of desire from the mainstream press to attack the punters.

This looks like an event that will shape the market of 2021 – the beginning of an explosive trend perhaps. This “Capital Riot” may become a Capital Insurgency… and mark the beginning of a generation-war over wealth.

I’ll leave you today with a look at what’s motivating those lighting the fuses – it ain’t just a quick buck, that’s for sure. This is an excellent article by a man called Radigan Carter, a decorated veteran of the US military with a take on markets that is as refreshing as it is brutal. If you get a moment this weekend, I highly recommend it. It ain’t the happiest of reads, but it’s certainly thought provoking…

PS Credit goes to the erudite Nic Carter for “The Capital Riot” pun. Carter is a prominent bitcoiner and a witty market observer –  well worth a follow on Twitter, if you’re a user of the platform.