Guess when this magazine cover was printed: 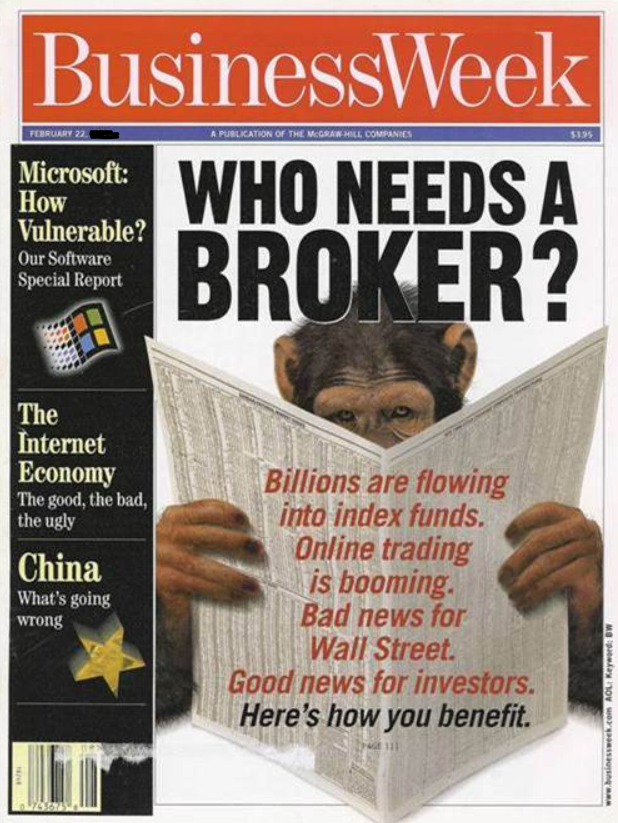 Bloomberg bought BusinessWeek at the end of 2009, and the design is clearly quite dated… but pretty much all of those stories could be written today.

Online trading is booming, especially during lockdown when there’s no sports to bet on…

Microsoft is vulnerable, no longer the titan it once was (though the logo has changed an awful lot since then)…

The internet economy still exhibits the features of a spaghetti Western…

And as the horrors of Xinjiang continue to be revealed, we know that there’s plenty “going wrong” in China.

But the more things change, the more they stay the same – that’s the 22 February issue of BusinessWeek published in 1999. The only story I can see on there that seems out of sync with the present is the “Bad news for Wall Street” bit. This was a decade before “too big to fail” entered the lexicon, and before passive investing and online trading became sources of profit for Wall Street rather than disruptive enemies.

That said, it seems like a lot of the elements present during the dot-com boom are present today, as we experience another massive bull run in tech stocks. While the world is much different now, 20 years on, some of the same forces are coming to the fore now with the “benefit” of lockdown.

But if history is repeating… February ‘99 was over a year before the dot-com peak. The tech-stuffed Nasdaq ultimately fell from grace in March 2000. Do the tech stocks have another year of juice still in the tank..?

I found that magazine cover on Twitter, which I’m trying to use more. Despite the platform becoming hugely politicised and censored, it does still have a strong “FinTwit”, or “Finance Twitter” community (my handle is @FederalExcess, in case you use the platform).

An investor by the name of Kevin Duffy shared the magazine cover in response to a claim that the speculative fervour in US stocks was cresting even its dot-com peaks. Here it is below – it’s a little busy, but what’s key is that blue line: 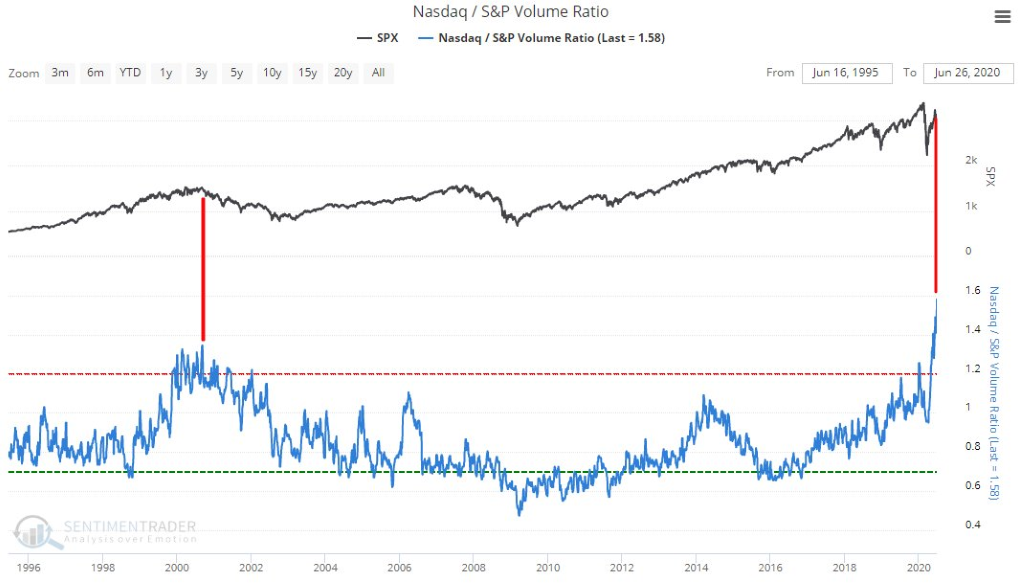 The blue line shows how much Nasdaq stocks (mostly tech) are being traded relative to the broader US stockmarket, the S&P (the black line above just shows the level of the S&P at the same time). The last time investors and traders were playing the Nasdaq so much more than the S&P was during the dot-com boom, when everybody was trying to make a buck out of the internet. Of course, this didn’t end well for the internet bulls – though they made a hell of a lot of money first before they lost everything.

Twenty years later, everybody is obsessed with the Nasdaq once again. In fact, as you can see on the far right, we’ve now entered uncharted territory: never before has there been so much more buying and selling of the Nasdaq relative to the S&P. Never before has the promise of technology dominated the minds and portfolios of investors to such a degree.

How much has lockdown actually contributed to this, I wonder. Is it just because we’re stuck indoors with our devices that investors are so much more aware of tech… or is it because tech is one of the only sectors to really benefit from so much of the population being indoors? Or both?

Perhaps this “Second Dot Com”, or “Deux Com Boom” was all going to happen anyway. I was expecting a melt-up this year after all, just one without a hazmat suit.

I suspect the truth of the matter will be revealed once the lockdown is actually over. Our return to “the real world” should reveal just how much of this tech frenzy was brought on by keeping everyone indoors. With lockdown being lifted somewhat here in England at least, perhaps we’ll find out soon…

PS My colleague Nickolai is on holiday at the moment, so there won’t be our regular market broadcast to discuss current events today. But we shall have something for you later on this week – stay tuned!