SODERMALM, STOCKHOLM – Not a mask in sight. The pubs and restaurants are busy – often full. But the teetotaller lobby in government has a monopoly on the sale of all booze above 3.5% ABV, and taxes it to high hell.

You take the good with the bad. Sweden, as I am swiftly discovering, is a fascinating place. Both familiar and alien, with all manner of quirks. The Swedes graciously appear not to mind my blundering stumbling around their capital… but I suspect they’re just too polite to show it.

My first impressions of the place are positive – I’ll let you know how my lockdown escape progresses. In the meantime, the results of Monday’s poll have come back… 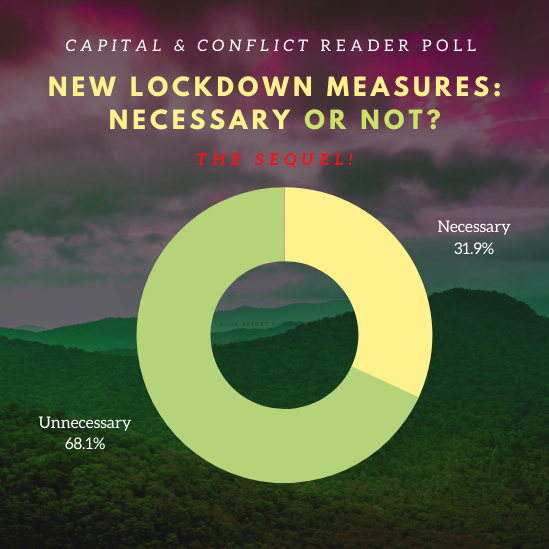 I asked you in late September, after the semi-lockdowns were enforced, if you thought they were necessary. They came back roughly 60-40 in favour of “unnecessary”. Looks like the “unnecessary” crowd have grown in size somewhat.

And it does look like Guy Fawkes night drew protests in the streets of London. I wonder if the anti-lockdown movement will gain momentum, as Nigel Farage’s political instincts appear to be telling him…

I have to dash off to record a special broadcast for The Fleet Street Letter Monthly Alert subscribers, but before I go, let’s have a quick rummage through the postbox…

I received this in response to my note on the one tonne gold coin the Aussies minted at the top of the last gold surge (The coin that cursed a bull market – 29 October):

I was very interested in your piece containing the details if the 1 ton Aussie coin – amazing.  Think of it 3 of those would do school dinners for half term! And how many could be made from the country’s gold reserves that idiot Gordon Brown gave-away?

You are right though, there is something magical about the Royal Mint – and even more magical about Benedetto Petrucci’s breathtaking engraving of St George and the Dragon on the reverse – as fresh on today’s sovereign as it was on the first one minted for King George 1V – selecting Benedetto was one of the few good things the poseur ever did!

As you know there have been numbers of other renditions, indeed one recently by Benedetto’s great great great neice, but none to match his in my view.

However my main point is the reliability of gold in the big picture – I am very old and have no charts to prove what I am about to propose, nor staff to beaver for me, but I guess that wherever you drop the pencil, in any ten year span since say 1920, gold (and the sov) will be worth more at the end of it than at the beginning,

I am not comparing gold with bitcoins – I think they are totally different creatures – and each performs in its own different circus but there you go!

The image on the sovereign of St George and the Dragon is certainly an iconic one. There’s a reason they equipped SAS units and RAF airmen with sovereigns during the first Gulf War – that image is known the world over, and you often don’t need to speak a foreign tongue when you have a golden one in your pocket (or in this instance, stitched into your uniform).

I must confess, I actually think the one-off 2005 sovereign is nicer than the original, however. But to answer your question, 401 of those one-tonne coins could have been minted with the gold Gordon Brown sold as chancellor between ‘99 and ‘01. How’s that for spare change?

I received this in response to Tuesday’s note regarding my prediction that Donald Trump would be re-elected (The night is always darkest before The Donald – 3 November).

I was with you till I read the bit about early victory parades.

Indeed, the polls have misled the elite, all the way since 2016, but an absolute belief that you’ve won is historically equally likely to lead to disappointment, particularly if you have the hubris to make that obvious to the voter.

As was noted, the opposition instantly goes into overdrive, and the ordinary voter, disgusted with such presumption of their support, has second thoughts… softly, softly, catchee minds.

Have a safe flight.

Now don’t tell anyone I said this, but I still think Trump is going to win. I’m biased of course, as I have money on the line – but as I said before, the night is always darkest before The Donald. And it’s looking damned dark now. Recounts and legal challenges still await, and I wouldn’t bet against the man – especially when his back is against the wall.