ABERDEEN, SCOTLAND – “One of the greatest risks in investing is crowding. Where there is hype, there is danger. That’s not just for bitcoin, but true for financial markets. Turn that idea on its head, and the contrarian starts hunting in the areas which have been ignored. Successful contrarians do not buy assets that have crashed, they buy calm assets that have been forgotten.”

So says Charlie Morris over at The Fleet Street Letter Wealth Builder this week. They’re words to live by – with social media as popular as it is today “the madness of crowds” should be feared now more than ever. The word “viral”, once used in a benign manner to described internet trends and sensations, now carries much more of its original meaning.

And as Charlie says, that applies to investing too. Just a couple days ago, the popular millennial trading board on Reddit – WallStreetBets – managed to make the price of GameStop shares ($GME) explode by crowding into call options. This forced the sellers of those options to buy the stock to hedge their exposure, which in turn pushed up the price of GameStop and made the options they’d just sold more valuable. Millennial millionaires were minted overnight, while shortsellers were dragged out by their ankles, with financial titans like Citadel running in to deliver billion-dollar bailouts.

Now that we’re all “extremely online” in lockdown, we should beware the madness of crowds more than ever. I should take some of my own advice here, for the likes of bitcoin and the VIX index which I often write about here are massively swayed by popular sentiment.

While it’s all very exciting, for building long-term wealth it pays to look over at the overlooked assets, away from the fireworks.

Well over a year ago I remember hearing about some investors who were interested in only buying shares which had not been classed as ESG (companies deemed to have a high environmental, sustainable, and governance score).

As so many institutional investors (endowments, pension funds, sovereign wealth funds, etc) face increasing pressure to only invest in assets with the ESG rubber stamp, this could leave perfectly good businesses with strong cashflows undervalued, purely as a result of being deemed politically incorrect. That presents an opportunity to buy ‘em up on the cheap, which these investors wanted to get in on.

I filed that nugget at the back of my mind for a later date, but was interested to see Charlie had done some digging to find out which companies in the UK have been “blacklisted” in this way. I won’t reveal any of his investment recommendations, but the list alone makes for some interesting reading – not to mention the hypocrisy, which Charlie points out…

At this stage of the hype cycle, I would argue that the stocks that are structurally under owned by institutions are less risky that those which are widely held… I looked at some environmental, sustainable and governance (ESG) UK index funds in order to see what they didn’t own. These are the top 20 underweights on ESG scores, which in this cycle, I have come to realise is a relevant measure. 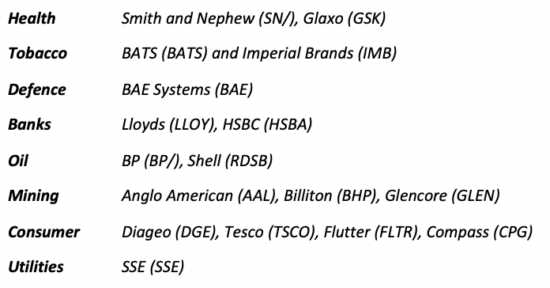 The miners and the oils make it, as do booze, fags, defence, utilities and gaming. I am not sure what Tesco, Smith and Nephew, and Glaxo did wrong, but they score poorly on ESG scores for some reason. Glaxo is also working on a vaccine while Tesco feeds us and Smith and Nephew specialises in hip replacements.

HSBC and Lloyds too. HSBC? It bent over backwards to be seen as a do-gooder, yet Standard Chartered, which lends to the commodities industry, scores well. What did Compass do? I mean the food it produces is probably awful, but it is feeding the masses.

I have more questions than answers on this subject. Unlike tech, these of-favour stocks are favourably priced. The lack of hype has kept prices low, and this makes them defensive in the coming storm. Not only do they offer value, but they pay handsome dividends.

In case you missed my ethics joke last week, it is a county to the east of London. No doubt I’ll tell it again. I take Essex seriously, but I put sound investment principles first.

That’s quite a list. I’m as mystified by some of the selections on there as Charlie is. I wonder how big a gap might grow between the ESG and non-ESG stocks, and the kind of political narrative which might emerge if either one begins heavily outperforming the other…