Thar she ₿lows! Who is the mighty whale making waves in the bitcoin market?

Thar she ₿lows! Who is the mighty whale making waves in the bitcoin market?

There’s something happening here.
What it is, ain’t exactly clear.
There’s a man with a gun over there,
Telling me I got to beware.

I think it’s time we stop,
Children, what’s that sound?
Everybody look what’s going down…

Upon arriving in the office a week ago and switching on my computer, I noticed something odd.

There are a few websites I check first thing each morning to stay abreast of market data, and one of them displayed what appeared to be a significant anomaly.

I didn’t quite understand what I was looking at to begin with.

From the outset, it appeared that transactions across the bitcoin network had suddenly collapsed in the early hours of the morning.

It was almost as though bitcoin’s heartbeat had flatlined.

Upon closer inspection however, I realised something quite different was afoot. It wasn’t that the number of transactions had suddenly been reduced…

… it was that a single transaction that morning had been so large, all of the others looked tiny by comparison.

At 4am, someone had sent somebody else $1 billion worth of BTC – one of the largest bitcoin transactions in history.

On Wednesday evening, it happened again. Only bigger.

The great whale of the bitcoin market

“Sing out for him!” was the impulsive rejoinder from a score of clubbed voices.

“Good!” cried Ahab, with a wild approval in his tones; observing the hearty animation into which his unexpected question had so magnetically thrown them.

“Lower away, and after him!”

Thar she blows: a bitcoin whale surfaces twice, with a pair of billion-dollar transactions. Transaction values across the bitcoin network represented by the blue bars on the bottom – click to enlarge.

The great whale of the bitcoin market surfaced yet again at 8pm, 11 September – this time, with a transfer of $1.3 billion worth of BTC.

While it’s possible that these two billion-dollar BTC transfers were unrelated to each other (two whales), I find this very unlikely considering their colossal size and proximity to each other.

It’s also worth noting that although there was a $200 dollar sell-off after the first swipe of the whale’s tail, this was likely unrelated to the whale’s move, as none of the BTC that was transferred has left its wallet yet. The billion-dollar transfer itself will have taken place off-market to prevent a sudden squeeze in price higher, and the buyer paying much more than a billion to accumulate the same quantity of BTC (almost ₿95,000).

So who is this individual so thirsty for BTC?

The intriguing identity of Moby Dick

… if I know not even the tail of this whale, how understand his head? Much more, how comprehend his face, when face he has none? Thou shalt see my back parts, my tail, he seems to say, but my face shall not be seen. But I cannot completely make out his back parts; and hint what he will about his face, I say again he has no face.

A third of the bitcoin used in the transaction had been sourced from a crypto exchange called Huobi. The sheer scope of accumulation required to meet the whale’s demand was illustrated well by The Token Analyst on Twitter: 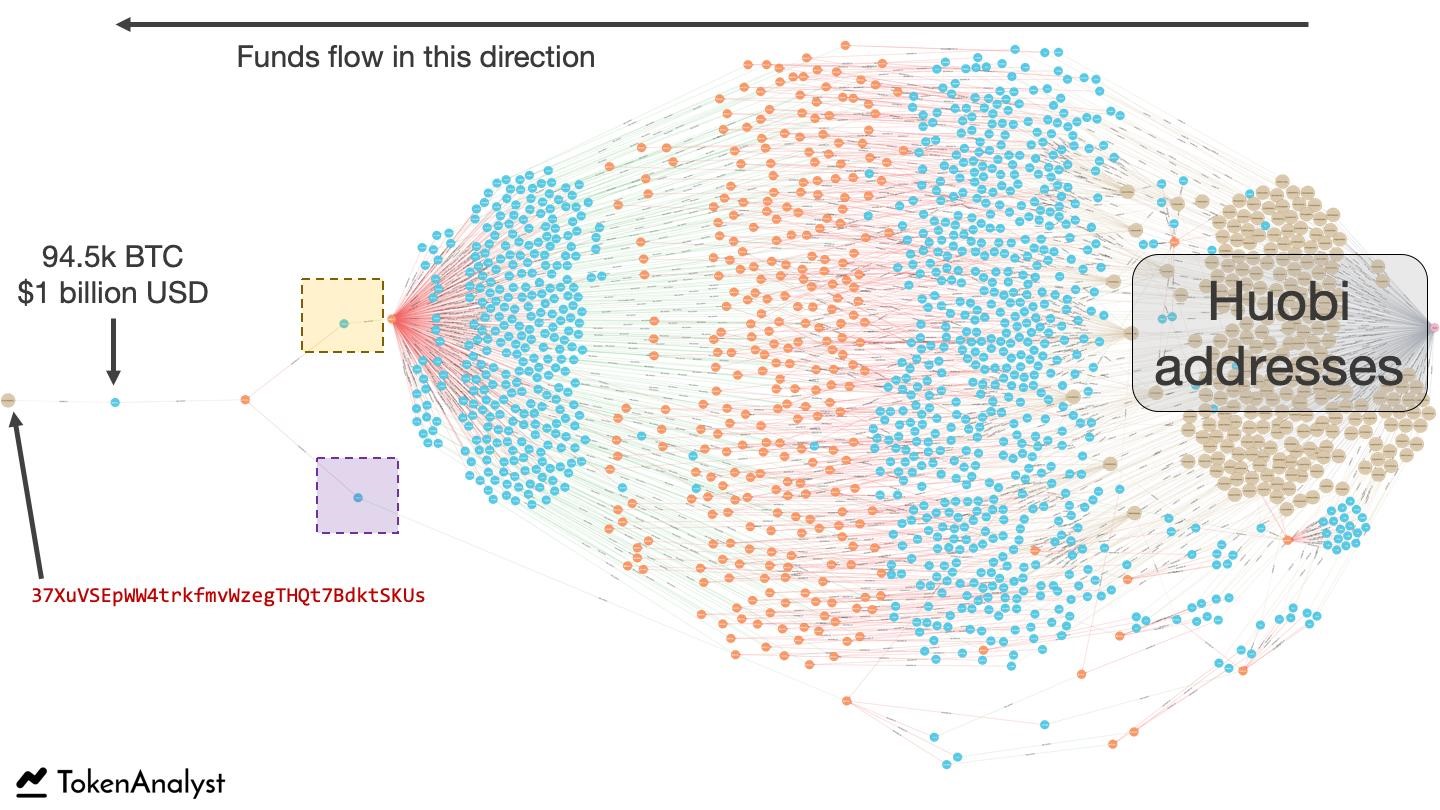 Huobi is a Chinese crypto exchange, which makes me think this may well be another wealthy Chinese individual taking the tried and tested route of using bitcoin to smuggle their capital out of the country. As Capital & Conflict readers will know by now, I believe that Chinese capital smuggling has behind much of bitcoin’s recent boom.

However, these recent billion-dollar transactions are of such a size that I’m more inclined to think that this is an institution purchasing bitcoin for its clients now, or ahead of time, as collateral for an upcoming bitcoin product marketed to mainstream/institutional investors.

On 23 September Bakkt will be releasing a physically settled bitcoin futures contract which would require such collateral. Fidelity already offers custody of bitcoin to its clients – perhaps one of them recently became rather bullish?

This comes at an interesting time for BTC, which has kept its head (roughly) above the $10k handle since late June. It should be noted that this during a period where the miners have been making hay while the sun shines.

While over the last three months they’ve roughly ₿13,500 new BTC per week, they’ve sold around ₿14,200 – draining their inventories by around ₿700 on net. With the price holding the $10k handle under this pressure, and institutions getting involved (or wealthy Chinese upping the ante for that matter), things may be looking even rosier for BTC.

I say “even rosier”, as Super Mario decided to go out swinging at the European Central Bank yesterday with a resumption of quantitative easing (Europe could only go nine months without monetary heroin) and a rate cut even further into negative territory.

Investors are gonna be pushed ever further towards risky assets – whether they like it or not.