It’s the last day of 2018. I hope it’s been a great year for you personally. Because it wasn’t for financial markets.

But there’s no point reliving what made markets tank in 2018. It’s probably still fresh in your mind. I want to point out something different.

Check out this headline from Bloomberg on 6 December:

18 years of stockmarket action and the FTSE 100 is back where it started.

Here’s the proof, from the Bloomberg article: 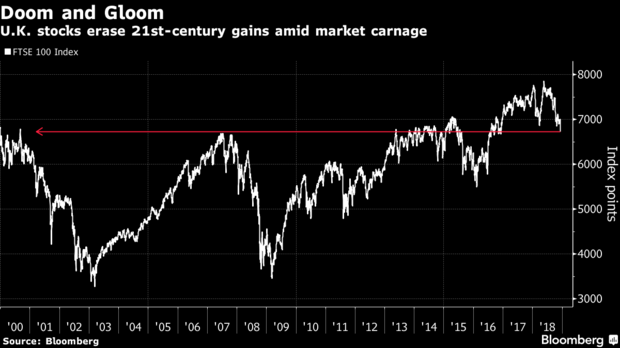 The stockmarket has been at this level over and over again in the past two decades. Traders call this range bound.

There are two ways to look at this.

Some investors will see the last 18 years as missed decades. Anyone who retired in 2000 and banked on the mantra “stocks go up in the long run” will be sorely disappointed by now.

But other investors will notice those rather large moves in the meantime.

Sure, stocks have gone nowhere after 18 years. But look at all that action during those 18 years!

And don’t forget, a stockmarket index like the FTSE 100 aggregates a huge amount of action. Within the index, plenty of stocks moved during those 18 years.

My question for you today is, what kind of investor are you? Buy, hold and hope? Or are you willing to actually make money from market in the meantime?

I know it seems out of your reach to trade markets. Or you might think it’s unwise.

But those are myths peddled by the sorts of fund managers who profit from them. They make money based on “assets under management”, not returns. They want you to hand over your hard-earned money and forget about it. You’re expected to simply presume that someone’s doing a good job investing it.

By the time you realise what sort of performance your funds have delivered, it’ll be too late to do anything about it.

Unless you act. But how?

I’ll explain that in a moment.

For now, consider you’re facing another year of having to make this decision.  Are you going to remain a buy and hope investor in 2019? Or are you going to take action at last?

Because tomorrow, you can choose.

What’s your method in the madness?

Once you escape the trap of buy and hope investing, a whole world of opportunities opens up.

Finance professionals and regulators believe you’re not smart enough to survive in that world. At Southbank Investment Research, we try to help you thrive in it.

Our team of analysts and traders are all about helping you make money for yourself. Or protect the wealth you already have.

Note, we don’t do it for you. We help you do it. You keep control of your money. And that’s a much more healthy relationship. We don’t want you to replace your reliance on some fund manager with reliance on us.

Instead, we help you educate yourself. And then make you aware of the opportunities staring you in the face. It’s just that nobody told you how to identify them.

Until now. Beginning tomorrow, one of our traders, Eoin Treacy will do just that. He’s prepared a four day Trading Triggers Tutorial for you. During the tutorial he will teach a go to strategy he uses in his $600 million fund. According to Eoin, it’s not only lucrative – it’s surprisingly simple to learn.

Don’t let 1 January 2019 be a false start for your portfolio. Learn something. Something that allows you to act for yourself each and every year going forward.