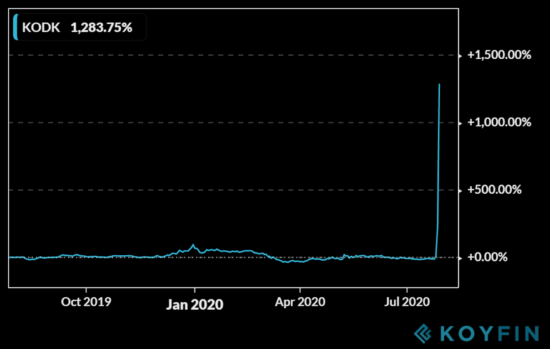 So, uh… you remember that company that used to make cameras when you were a kid? Kodak?

Apparently it uh… makes drugs now. Got three-quarters of a billion dollars as a loan from the US government to start doing it. Stock went up like it was being acquired by the Almighty himself or something.

Yeah, I didn’t see that one coming either. Seems like a real change of tack for the company.

Funny thing is, the stock was traded 30 times more than normal the day before the White House announced it all.

I guess somebody really smart figured out that pharmaceuticals is just a logical next step for a camera business, and that this was all gonna happen ahead of time. Must be a real clever fella huh? A market Sherlock or something…

Tipped off? You mean… somebody spilled the beans ahead of time? Insider trading?

Separating the wheat from the chaff

About halfway through the task of shearing my hair off, my barber finally recognised me. I don’t blame him – he had a lot to cut through.

I thought I’d the keep the beard for a while. Now freshly shorn, I’ve transitioned from looking like a caveman to a trader from the Ottoman Empire (or something – according to my sister I look like an actor from a Lebanese TV drama).

But though the hairdressers are open once again, it looks like there are plenty of cavemen still out there in the market.

The sheer speculative energy behind Kodak’s rise which pushed the stock up over 1,200% in no time at all… is something primal.

Such spectacular price increases and sudden mega profits for those who got in early (tipped off or not) beggar belief. Makes me question a lot of underlying assumptions I have about the broader investment world. If this kind of speculative energy that can betray you as fast as can enrich you is churning around in stocks like Kodak… how do I know it isn’t propping up the price of things like gold?

Is the same irrational force that kept folks buying and buying Kodak until that chart went vertical present elsewhere, just more heavily diluted? And when that primal fervour burns itself out… how far might prices fall?

The key question (I think) is how pervasive that dangerous force is. You can see that it is present there in $KODK – but where else are prices being pushed hard by market participants who don’t care about the price (yet)?

If you’ve been reading this letter, you’ll know I love gold. But it has gone up faster than I’d expect recently – maybe faster than can be trusted.

Or take James Allen’s renewable energy plays over at Exponential Energy Fortunes. There’s a great case to be made for renewables, and great opportunities for investors to seize in the space – just check ’em out here. James has been able to make some spectacular gains for his subscribers with his expert analysis on what’ll move the energy space next.

But those spectacular gains have been somewhat shocking as well – while not so vertical as Kodak, they’ve been similarly aggressive and driven at least some degree by speculators. Cash out when you’ve made the money, and you’re all good – but hang around too long, and you might be on less firm footing (that’s why it’s good to have James on your side – he spends probably too much time constantly worrying over how strong the market is for the stocks he recommends).

And then take bitcoin, an old favourite of mine. It’s been having a wild time recently, at the time of writing busting past $11k. You know I like it, and that ain’t changing – but is the market strong, or just full of that primal Kodak passion?

I’m willing to give bitcoin the benefit of the doubt for the time being. But way out in certain sectors of the altcoin space (cryptocurrencies that are not bitcoin), there are definitely signs of things getting out of control. Sam Volkering over at Crypto Profits Extreme told his subscrribers recently just how nuts one area of the crypto market is getting:

Last week I said that you should approach the decentralised finance (DeFi) space with great caution. That view hasn’t changed in a week. But geez, some of the prices of DeFi tokens have.

That makes it very hard to tread cautiously. What’s a little worrying though is the crazy numbers, complex strategies and clear FOMO that’s rampant in the DeFi space right now.

And there’s no better example of this than the Yearn.Finance situation.

When I wrote to you last week, the Yearn YFI token was trading at a fiat-converted price of around US$1,100.

Today as I write it’s up around US$4,000. That’s 264% in just seven days. Crazy? Not so crazy in the crypto world… that is until you see that the YFI token is essentially worthless.

And it’s not even me that’s saying it’s worthless, it’s the Yearn.Finance project itself.

As you can see from its tweet on 21 July: 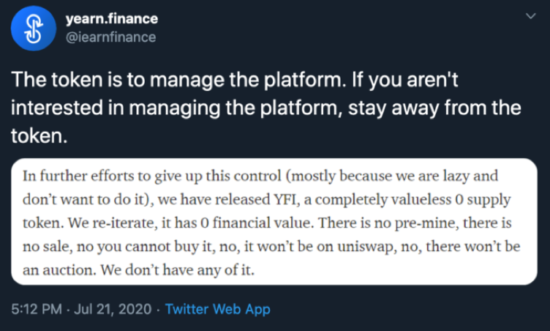 On 21 July, the very project that issues this YFI token says, “it has 0 financial value” and to “stay away from the token” if you’re not interested in managing the platform.

At this time the token is trading around US$880. From that tweet the fiat-converted price is up 355%.

Look, I’m all for traders coming in and out of positions making decisions, riding FOMO waves, whatever. But you really have to question the DeFi space when the project itself says its token is a governance token used in the managing of the platform and has no value at all, and then FOMO bids its value up to more than US$4,000.

Does that make any sense to you at all?

Ultimately, if you want to make any investments at all, you can’t be perpetually afraid that excessive speculative capital is bidding up the prices of everything. Otherwise, you’d just sit in cash all the time.

But there’s strange winds a blowing out there, and we should be very mindful of them. As my friend and colleague Tim Price likes to say… “let’s be careful out there.”