As lockdown has dragged on and on, some folks have been hankering for a big ol’ fireworks display when it’s finally over.

It’s quite understandable, especially for those in high-pressure jobs. Stuck alone indoors breathing stagnant air, you couldn’t really be further away from a crowd of people in the fresh night watching bright explosions flash across the sky…

But for some reason, a group of highly influential individuals in academia just aren’t having it.

So reads an open letter from a group of decorated nuke scientists and a retired Air Force General to Senate majority leader Mitch McConnell. It was published soon after the US Senate recently approved funding to resume nuclear weapons tests. It’s been 28 years since the greatest firework of all time was rolled out by the Americans… and these fun-sponges want to keep it that way.

Don’t these guys know the kind of pressure the fellas in the White House are under? Don’t they understand how cathartic it would be to end the lockdown with a decent firework show?

C’mon fellas. Let’s light up Bikini Atoll again, like the good old days. It’s not like other countries aren’t paying tribute to The Mighty Firework. This was one of China’s state media outlets on Wednesday: 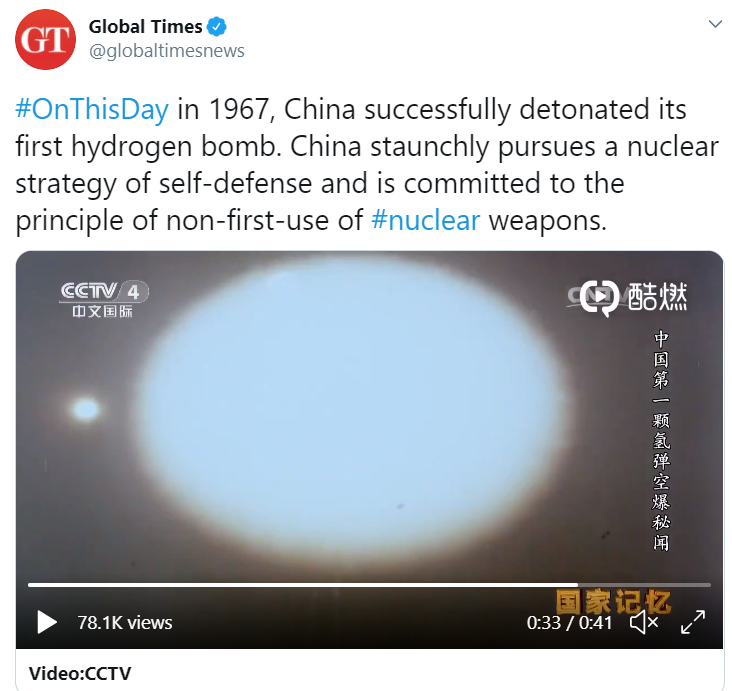 While of course I’m being rather flippant with the subject of nuclear weapons testing, the practice of incinerating remote parts of the world as a show of force is something investors will need to get used to as the 2020s unfold.

Sam Volkering and I were discussing the return of geopolitical risk in yesterday’s market broadcast – I believe market participants aren’t used to the phenomenon due to the decades of US unipolarity, and the lack of great power competition and all that goes with them.

Sam said it was important to focus not on the events themselves and the more direct and immediate consequences, but to focus on the ripple effects they have – how they might force companies to relocate from aggressive countries, or indeed to relocate away from potential victims of them.

The brutal fistfight that took place in the Himalayas earlier this week between Indian troops and People’s Liberation Army forces is a foreshadowing of the kind of flashpoints and consequences that investors should expect a lot more of in the future.

For example, it’s only been a few days since, but the Indian government has just banned the use of Chinese equipment for 4G internet within its borders. Anyone betting on Chinese companies expanding and servicing existing installations is having a very bad day. Conversely, this now creates a huge opportunity for the companies outside of China that can fill that vast void.

That’s not to say that investors should simply avoid all sectors which might be affected by the Second Cold War of course – that would be incredibly difficult for somebody with a well-diversified portfolio considering all the possible outcomes after all.

And there’s still going to be technological progress advanced and installed by publicly traded companies during this period of course. India’s gonna need 5G for example, and the investors who can straddle that trend stand to make a lot of money with the right positioning.

What’s key is that the investing landscape has been flat for decades, where “cheapest cost=best choice”. That landscape is now being bent and creased by geopolitical forces, where being the cheapest may not be so much of an advantage as being close to political power or geographically close to powerful nations. This makes the investing world shadier, murkier – influenced by factors you can’t read on a balance sheet or hear on an earnings call…

But that’s all from me for today – I’m just off to record a special edition of our market broadcasts with two of our editors. It’s a bumper edition, with more structure and much longer than our usual broadcasts, intended to set you up for the weekend. The subject at hand? A barbarous relic. It’s hated by some, loved by others – and right now it’s as shiny as ever.