Painkiller, but no skin graft

Painkiller, but no skin graft

The ol’ business of banking is taking a beating.

HSBC is in the process of cutting 35,000 jobs and setting aside $8-$12 billion to absorb losses from WuFlu-related defaults.

The popular portfolio holding has now fallen beneath the level it hit in the middle of the financial crisis. The share is now in the 1996 price range: 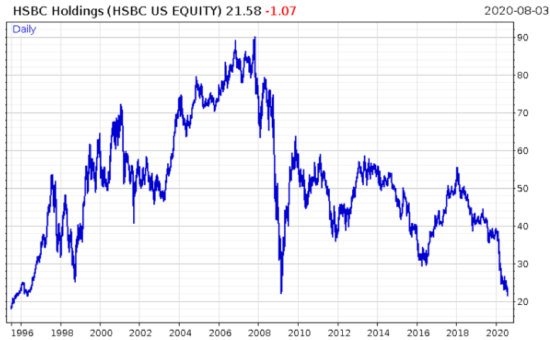 ‘08 was of course a financial crisis, which obviously had direct ramifications for the likes of banks. When a bailout was administered that eased many of the problems facing HSBC, which explains the rapid (though incomplete) recovery of the share in the middle of the chart.

This time around however, there hasn’t been a bailout of the banks like last time as the problem didn’t originate in the financial system.

And it looks like the Federal Reserve has managed to restore trust in the interbank lending market by jamming lots more money into it. That key indicator of how much banks trust each other, the Libor-OIS spread, has now fallen back to pre-WuFlu levels.

We explained the importance of the Libor-OIS spread and what it actually is earlier this year when it was exploding. You can read again for a refresher here: Restaurant in Florida blowing up the banking system, 1 April.

In February-April, banks were charging higher rates of interest for short-term loans from each other. As such, loans were perceived as being riskier – fears of a bank defaulting on a loan to another bank were in the air.

But due to central banks – especially the Federal Reserve – stepping in to ensure the lending machine keeps going, that lack of trust has dissipated. “Banking stress, meet printing press”: 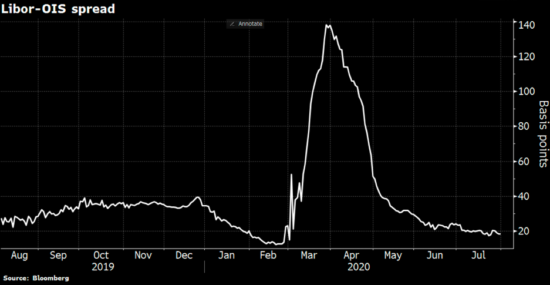 So the lending system keeps going, but there ain’t no bailout, so the banks – quite rightly – have to cover their losses on their own. To use a metaphor, having been burned by the WuFlu lockdowns they’ve been given a painkiller, but not a skin graft.

This makes a 2008-2009 style recovery for the likes of HSBC much harder to imagine. To make matters worse for banks, the risk-free interest rates that can be earned on government debt just keep on going down. As banks hold significant quantities of government debt as part of their capital base, the lack of interest they earn on that debt is further hurting their profitability.

Interest earned on ten-year loans to the US government has plumbed all-time lows during the crisis due to ever higher demand: 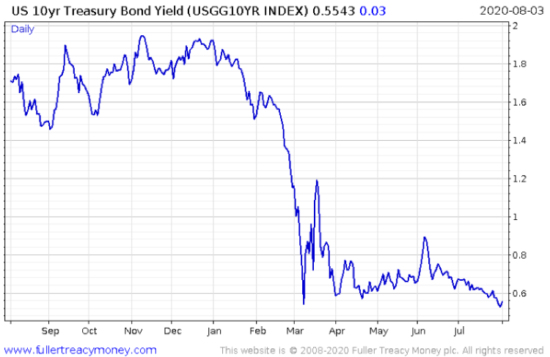 As Jim Reid, a research strategist for Deutsche Bank (a financial firm which is experiencing plenty trouble as well), recently opined on the strange case of the lack of interest rates:

The U.S. has been through depressions, deflations, wars, restrictive gold standard regimes, market crashes and many other major events and never before have we seen yields so low back to when the Founding Fathers formed the country.

To put this in context, these bonds are a proxy for interest rates globally as the US dollar is the global reserve currency. As a general rule, the lower the rate of interest, the harder it is for banks to make money through traditional lending.

As a result, you can see that for the last 15 years or so HSBC and interest paid on the US ten-year have traded loosely in line with each other. When the US government is getting more money thrown at it by investors (whatever the reason), shares in HSBC are being sold: 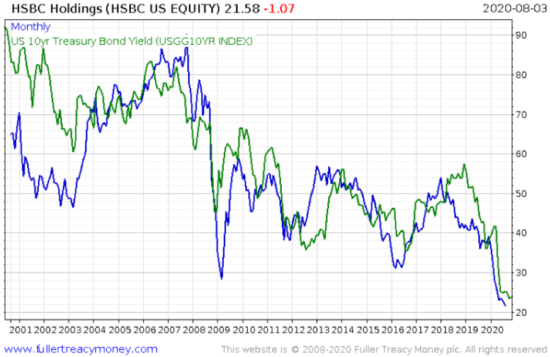 So it ain’t looking all that bright for banks.

What’s interesting to me though, and what differentiates this so much from the financial crisis, is the incredible boom we are witnessing in other areas of the stockmarket.

The easiest and broadest way to illustrate this is just to show you a chart of the Nasdaq, or “big-tech” index, which just keeps on making all-time highs: 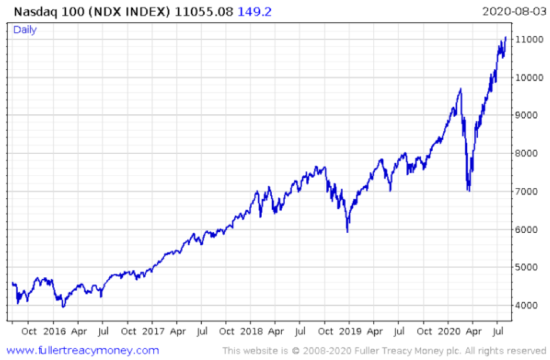 The sheer angle of that line post-March is something to behold. (Though believe it or not, there are even steeper ones out there in the market, which some of our subscribers have been riding to riches – just speak to James Allen).

You’d expect banking’s trouncing by tech to end at some point, but it won’t be until the economy is properly opened again. Banks need to finance things, and that means people working, earning and spending – not cooped inside with their devices.

Tomorrow, we’ll take a closer look at the blend between banking and tech – fintech – and of course, bitcoin…

PS But if you can’t wait until tomorrow… over at Exponential Investor you’ll find a crash course on the potent, explosive blend of banking and tech known as “DeFi”. It’s created a volatile boom – dangerous, even – in digital wealth. Click here to learn more.