Market, market, on the wall… who is the smartest of them all?

Market, market, on the wall… who is the smartest of them all?

You’ll often hear it said that “bond guys are smarter that stock guys” as the government bond (debt) market has a good track record of predicting recessions, while the stock market has a habit of ambling carefree into them and only realising something is wrong after it’s too late.

Bonds have also just been a great asset to own in recent decades. Despite the bull market in bonds reaching heights that wouldn’t have been thought possible in centuries past (where debt is so highly valued it pays less than zero interest), the investor who was brave enough to lend their money to governments at rates lower than ever before in human history has (ironically) been richly rewarded.

This chart shows you the performance of what you might assume would be a very dull trade: buying and holding US government bond futures, and continually reinvesting the proceeds over time.

As US government bonds are considered to be a very low-risk asset (indeed, some would say it is the premier risk-free asset), you’d expect the returns on such a position to be quite low: no risk, no reward, right? Wrong: 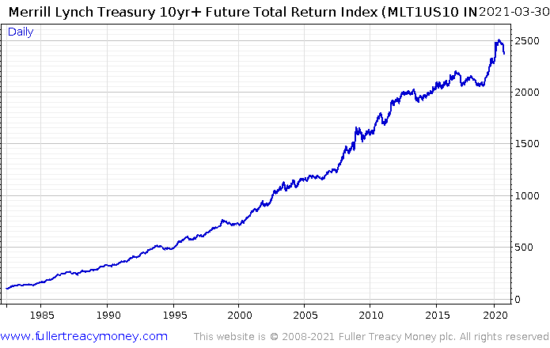 The long-term investor who took the “risk-free” option and bought the debt of developed nations at almost any time over the past 40 years has been extraordinarily well compensated for his trouble. Even – nay, especially – post financial crisis, which makes the question of exactly what has happened in the past decade all the more fascinating, and the bond investor appear ever the wiser.

But recently, the bond investor has begun declaring that there’s trouble afoot. You may well have noticed how that chart above has begun to turn down quite steeply – it peaked in June last year.

But the reason I ask you to pick a side and trust either the bond investor or the stock investor, is because they have begun contradicting each other.

For the stock market, it looks like clear skies ahead: the VIX index (green) is low. But the bond market says something isn’t right – expected volatility illustrated by the MOVE (blue) has moved higher, and remains elevated: 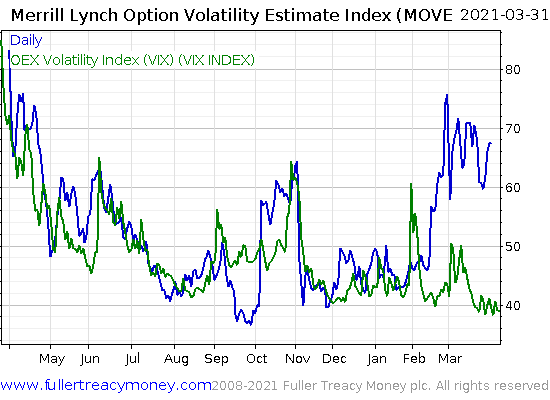 It could be that whatever volatility is expected in bonds will be contained to the bond market, and stocks will remain unaffected. But trouble in the bond market often leads to trouble in stocks. As so many companies rely on debt, volatility in the largest debt market (bonds) is bad news. And if bonds are sold off, they offer progressively more yield to those willing to buy them. As they’re “risk-free” after all, some investors may sell their stock holdings to buy some bonds to earn a steadier, safer return.

Speaking more broadly, bonds are significantly more important to the overall structure of the financial system than stocks are, so if you can hear explosions going off in there, it’s generally time to be very selective with your stock holdings. Late 2018 would be a good example of this, when a sell-off in bonds led to broader chaos through the financial system until central bankers rode in to save the day.

So who would you trust? Will the “bond guys” be proven to be smarter than the “stock guys” once again? Or have the tables turned? Let me know here.