THE JUNCTION INN, STAFFORDSHIRE – Once more into the pub dear friends, once more! While we still can…

I’m glad I’m not in London at the moment as the new anti-WuFlu measures come into force. Or Scotland for that matter, where you soon won’t be allowed to pay anybody a house visit.

I’d like to know your thoughts on the latest lockdown measures: do you think the new restrictions are necessary?

Let me know here, and I’ll get a poll ready for tomorrow’s letter.

The title of our last issue of The Fleet Street Letter Monthly Alert (published a few weeks back) was “The end of the Glorious Lockdown and the winter of our discontent”. Charlie Morris and Nickolai Hubble headed it up, with a smidgen of input from me.

The main thrust of the issue was how the investment trends we’ve witnessed since March are going to change. The economic damage of the lockdowns has yet to really show its face, and nor has the cost of the governments sudden spending measures, which even had the Bank of England wondering if the Treasury might run out of money.

Among Charlie Morris’s instructions to readers in that issue was to “Beware the Nasdaq”, or more specifically shares in Apple, Amazon, Facebook, Microsoft, and Google. As detailed in previous letters, it’s US tech shares that have led the US stockmarket’s “recovery” since the March shock, reaching valuations so high you think there’s an error with the webpage (the market cap of Apple is only a whisker from $2 trillion as I write this).

Here’s a snippet from his section of the issue:

These [five stocks] have been claimed by the defensive crowds as 21st century consumer staples. The idea is that regardless of the economy, we use and need their products. In fact, so much so that in the recent Covid-19 crisis our consumption actually rose as we were locked down at home.

If a defensive stock shakes off the economic cycle during good times and bad, imagine how attractive that makes a stock that blossoms when the tide goes out? The trouble with that is that the recent shock was a one-off and these companies have already seen their best days. Their collective worth is similar to the whole of Western Europe and Apple alone almost equals the 2,000 companies that make up the Russell 2000 Index.

It’s a bubble of historic proportions. These companies are great, there’s no doubt about that, but they are valued as if they were excitable startups that have dominated the earth and are heading for the planets. It can’t happen, so it won’t happen…

The broader market is coming around to his way of thinking. The biggest Nasdaq ETF, the $QQQ, just saw its largest outflow of cash since the dotcom bust as investors pull their money out: 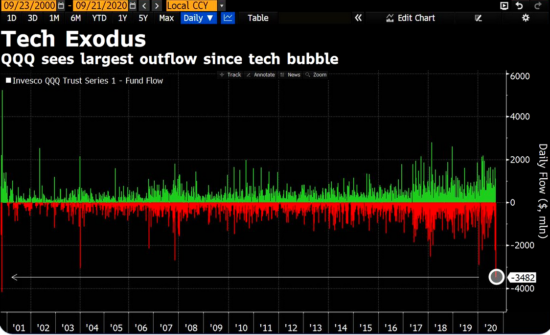 Cash going into the ETF represented by green bars going up, red bars down for outflows
Source: The Market Ear

It’s Charlie’s birthday today. I won’t say how old, but it’s a BIG number but he’s reached a major milestone in his life. Sadly, the large party he had planned must now be cancelled due to the new WuFlu rules – so he’s told me, to tell you, to send presents to his house.

While American tech may have lost some of its allure, that doesn’t mean it’s “last orders” for US stocks however. Even European government pension funds are ditching European stocks for American ones…

In its annual white paper published yesterday, the [Norwegian] Government Pension Fund Global (GPFG) disclosed plans to upsize its allocation to U.S. equity markets. The fund, which manages some NOK 10.49 trillion ($1.15 trillion), would shift about $51 billion (or 6.5% of its assets) to U.S. and Canadian stocks from European ones, bringing the total North American allocation to 48%.  That follows the March decision to upsize its global equity portfolio allocation to 70% from a prior bogey of 65%.

As Bloomberg noted yesterday, the GPFG traditionally weighted its holdings more towards Europe, which was a function of Norwegian trade patterns.  Other considerations are now front-and-center. “The changes we are proposing will ensure the investments better represent the distribution of value creation in listed companies globally,” commented finance minister Jan Tore Sanner in a news release…

Value creation is the holy grail of investing, but in a locked-down world, it becomes even scarcer than it already was. The grail-seekers trail is becoming even more treacherous…

PS With “semi-lockdown” now underway, one industry in particular that’s had a great year so far… is primed to just keep on booming. Older investors often struggle to appreciate just how much cash is flowing into these companies, but the younger folks grasp it quick as a whip. And in this sector, there are three stocks in particular you might want to pay attention to…