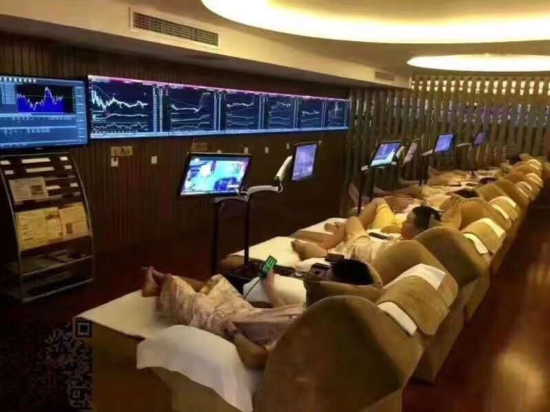 When watching the market becomes not just a recreational, but a relaxing activity… you have to assume that the market must have moved in a direction which pleases the observer for some time.

That’s when it’s time to consider taking the opposite view. When everybody is on one side of a boat, you should run to the other if you want to avoid getting soaked.

If anyone can come up with a decent caption for it, I’ll print it next week: boaz@southbankresearch.com. So far all I’ve come up with is “Gold investors, 2030 AD”. There’ll be a time when investors in gold and gold stocks have become so enriched by their gains that they become complacent.

The market will have bid up the price of gold mining stocks so much, and for so long, that everybody thinks the bull market will just carry on going into the sunset… and that’s when it’ll be time to get off the boat.
I’ve used 2030 just as an example – when commodity bull markets run, they run for years. Whatever the case, the scenario I’ve described above is a way off yet… so there’s still time to get aboard now if you haven’t yet.

I can’t confirm if that photo from a spa in China was taken recently – all I have is a gentleman on Twitter’s word for it – but it does make for quite an image.

Considering how vertical the Chinese stockmarket has gone in the past few months, I wouldn’t be surprised if that photo was indeed taken in the recent past. Since March, the CSI 300 – the top 300 stocks on the Shanghai stock exchange – has gone almost vertical: 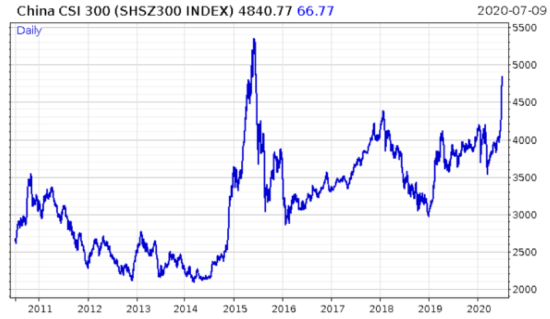 Note how it has yet to crest its 2015 peak, though it’s certainly making a run for it. That image at the top may in fact be from that incredible 2014-15 boom, which was spurred on by the introduction of leverage and the rise of the retail investor in China.

It led to images of The Legendary Banana Stand Trader, pictured below:

It’s possible that the Chinese Communist Party is trying to goose the mainland stockmarket to aid “morale” in China as the world faces off against it, but we’ve seen some strong bullish sentiment in other emerging markets too.

Eoin Treacy isn’t convinced that this bullish surge we’ve witnessed across the global stockmarket has much substance behind it, as he told his subscribers in a recent note:

I can’t shake the feeling we are in the eye of the storm. A number of the countries that were heaviest hit by coronavirus are now seeing the number of cases stabilise at reasonably low levels. Meanwhile, those places which did not originally experience a surge are now reaching capacity in their hospitals systems. That is particularly true in the Americas.

We cannot know how big the default problem is going to be until the moratoriums on evictions run out. That probably won’t be for another few months. However, there are millions of people who are now unemployed. There are businesses which might best be described as zombies and the only thing holding it all together is the willingness of the Federal Reserve to continue to print money with abandon.

Stockmarket investors seem willing to support prices at present because they are convinced there will be additional stimulus measures delivered in the near term. The best the authorities can hope for is an orderly dissolution of a large number of businesses over a reasonable timeframe. The alternative, which the stimulus was aimed at avoiding, is for it all to happen at once…

I’m afraid that’s all I have time for today – I’m just off to record this week’s podcast with Sam Volkering, where we’ll be discussing some of the big market developments of the week. Stay tuned!