Get on with it, America

Get on with it, America

And the results are in!

If, like me, you’ve been endlessly refreshing the news since Tuesday night, then you’re probably pretty keen to see the final results of what has been an extraordinary election.

Votes are still being counted in a few key battleground states – namely North Carolina, Georgia, Nevada, and Pennsylvania. And, as many of you rightly predicted, the polls were wrong.

The so-called “blue wave” many analysts and pollsters were predicting has failed to appear.

But at the moment Biden appears to be within touching distance of the 270 Electoral College votes he needs to send him to the White House.

Even if Donald Trump throws out more accusations of fraud, it doesn’t look like he’ll be able to change the course of the votes.

So, as Boaz escapes the second UK lockdown for the sunlit uplands of Sweden, let’s try to figure out how markets are reacting and why.

Understandably, the week leading up to the election set markets on edge. Last week equity markets tumbled in the US – tech stocks included – amid uncertainty around elections and renewed wave of lockdowns in Europe, enduring one of their worst weeks since March.

By the close of markets, Monday, however, they’d already picked back up again.

Markets were poised for a sweeping Biden victory, in line with the polls.

With Democrats at the helm, they would be able to pursue a massive fiscal stimulus package and kickstart the economy.

But a sweeping victory never materialised.

And stocks have continued to rise anyway.

Yesterday the S&P 500 bounced upwards as markets opened, and gained 2% throughout the day. 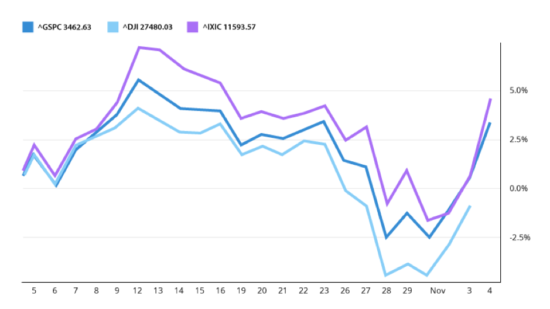 At the end of October, the VIX index, or the “fear index” as it’s also known since it measures expected volatility, reached its highest level since June. But yesterday, it fell sharply.

So equity markets are fairly calm. Or perhaps they’re just watching and waiting. 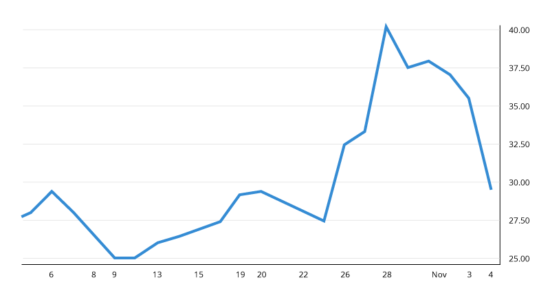 But if we dig into the details a little bit more, some familiar patterns begin to appear.

To paraphrase the Greek philosopher Heraclitus: “There is only one constant in life: Big Tech stocks will rise.”

But if we look at cyclical stocks – those companies whose valuations are tied more closely to the health of the real economy – the picture is less rosy. These were the stocks that were supposedly set to benefit the most in the event of a sweeping Biden victory.

And notice that I say sweeping.

At the time of writing, Biden looks on course to win the presidency, but not the Senate.

This could well mean that we enter a rather frustrating stalemate. It’ll make passing policy very difficult, at a time when fiscal stimulus was expected to provide the adrenaline the market needs.

Which means that, as Democrats and Republicans lock horns, the Federal Reserve will be the only body able to prop up markets.

We’ve seen the Fed stray into ever-more uncharted territory not just throughout the pandemic, but over the past decade. So if a deadlocked Congress makes it impossible to pass a stimulus package à la the Green New Deal Biden has promised, then the Fed may be pushed into an even greater position of responsibility.

The ability to borrow at incredibly low rates can encourage excessive risk-taking, and ups the chances that capital will be misallocated, potentially fuelling asset bubbles for example.

So if you believe that quantitative easing and ultra-low rates have pushed asset prices to unsustainable highs, then we likely haven’t seen the half of it yet.

That’s my take. But I’m keen to hear what your view is on the election and the future trajectory of the economy. Drop me a line at [email protected] with your thoughts and predictions.

PS Regardless of how the US election turns out, there’s one technology that looks set to revolutionise society. I’m talking about 5G. And if you’re interested in learning how to best invest in 5G-related companies, then look no further – my colleague Sam Volkering at Frontier Tech Investor is here to help.