I asked you last week how it might be possible to buy four pints of bitter and fish and chips with change to spare from a single pound coin. Many of you wrote in with the answer I had in mind, which is to pay with a gold sovereign (technically a pound coin as it has a legal face value of £1).

But some of you offered to go further. A select few readers, likely devout sovereign hoarders by nature, offered to actually give a demonstration of this and go out and pay for such a hefty fish supper with gold (lockdown permitting of course – I expect this would be impossible through Deliveroo, Uber Eats, etc).

While I admire such commitment, I don’t think any of you should be parting with your sovereigns right now – even in exchange for such a prize. Gold has been cruising at an all-time high altitude in pounds for some time now, but yesterday marked an important moment for the more globally significant dollar price of gold.

As the dollar is the global reserve currency, the price of gold in dollars is indicative of global demand for the shiny stuff. Gold in USD has yet to beat its all-time high of $1,900 it peaked at back in 2011… but it’s getting there. Gold passed $1,800 yesterday, hitting almost $1,820 in intraday trading.

For some historical context, here’s the dollar price of gold since the mid-70s: 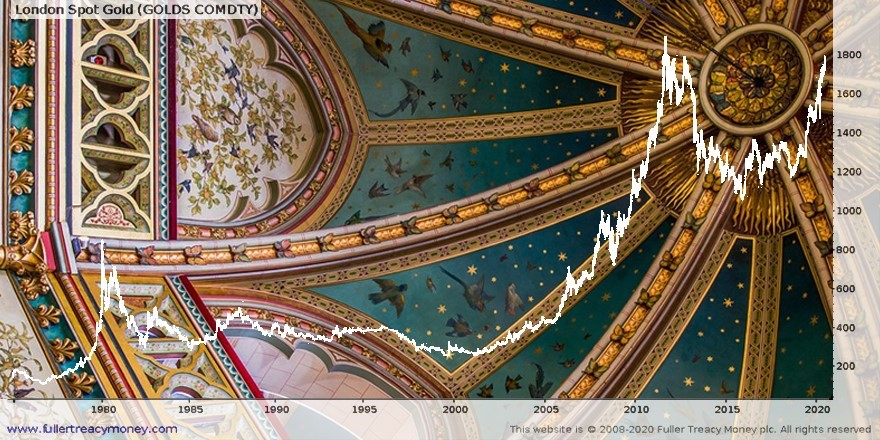 Aurum has a little way to go yet… but it’s getting there, and in a hurry. I compared the growing gold hoard being accumulated by investors through exchange-traded funds (ETFs) to Smaug’s hoard a while back. The index which tracks the level of gold held by ETFs doesn’t update every single day, but it did on Tuesday and, well, the hoard just keeps on growing… 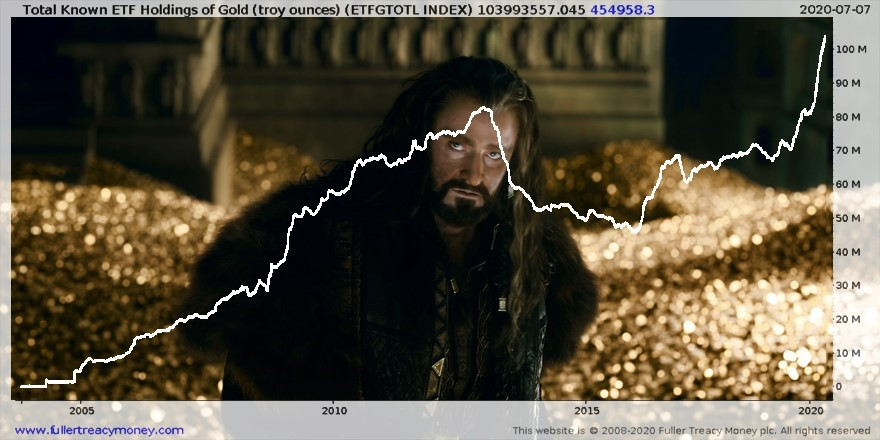 A twist on the gold story I find interesting is the popularity of these gold ETFs from users of Robinhood, the commission-free trading app targeted at youngsters in the US. It has become notorious in recent months for youths driving up the prices of bankrupt stocks.

Here is the price of $GLD (in pink), the world’s largest gold ETF, with the price of each share (which is effectively pegged to the gold price) displayed on the left-hand side. The green line shows the number of Robinhood accounts that own shares in it, with the absolute number on the right-hand side:

While this gold ETF is not anywhere near the most popular investment on Robinhood, 24,000 is a lot of kids buying gold…

It’s getting pretty hard to make an argument against gold these days – especially if you’re a pound-based investor with a long-term view.

You need to be a proper deflationista (too much debt and demographic decline will drive the value of cash up and the price of everything else down)… an ardent dollar bull (effectively a dollar deflationista – too much dollar debt out there, and there’s not enough dollars)… one of the “it’s a pet rock” types… or awaiting the impact of a gigantic golden meteorite that will overwhelm the gold market with supply, to really be predicting doom for the price of the yellow metal.

(I’m being a little flippant – another liquidity shock like we had in March would certainly hammer gold down in the short term – but you know what I mean.)

I spoke to a former colleague yesterday evening, who told me one of his greatest investing regrets was not buying gold five years ago. But when I asked him what might make the price of gold (in pounds) actually go down in future, especially in light of the WuFlu government spending splurge, he couldn’t think of much – he was just anchored to the price of gold five years ago and so filled with regret, that to buy now would feel like crystallising a loss.

But what inflation destroys, gold preserves – and inflation ain’t going away, even if it remains low. A common refrain in the gold community is to remark on how the cost of a decent suit with belt and shoes today is likely around the same as it would have cost a wealthy man in Rome’s prime, if you measure it in grams of gold. With Brooks Brothers filing for bankruptcy yesterday, you may be able to get “extra suit for your sovereign” when the company tries to shift its glut of inventory – but I’d still hold on to those sovereigns if I were you.

PS While the gold price has been hitting highs reminiscent of its 2011 peak, the gold miners aren’t anywhere near as expensive as they were then – even though they’ve begun paying massive dividends! For expert insight on the gold mining stocks positioned to soar from a higher gold price, click here.