SODERMALM, STOCKHOLM – Could this be a punter’s paradise? Goldman Sachs thinks we’re in one. Its list of stocks loved by the everyman is up nearly 70% since May, which would suggest that the “little guy” is having a big impact on the market…

If Goldman is correct, then that’s good news as far as I’m concerned. Francis Drake’s motto of “greatness from small beginnings” is a noble aim for any investor – and an accurate description of the investment successes that are achievable for the everyman willing to pursue them.

Such pursuits are dangerous of course: that’s why you get paid for them. But if this election is like recent ones, we should see investors piling into the market as we head into 2021, full of bullish sentiment. This is a nice chart of investment fund flows since 2004, illustrating the flow of money heading into markets around election time – drawing down, and then surging in: 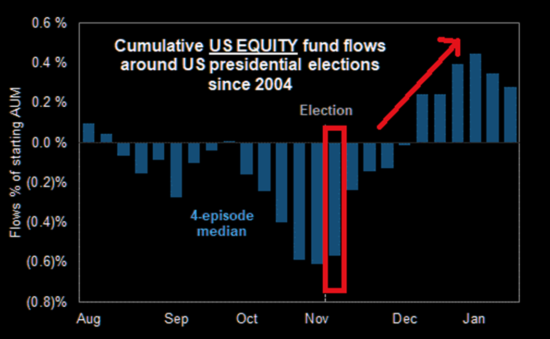 Of course, that chart doesn’t include data from the Bush/Gore election in 2000, which was contested – just like this one will be. (If I’m right that Trump will clinch this and remain president, I can barely imagine the shrieking we’re gonna here from the media as they backtrack on all their assumptive articles on what a Biden administration means for the world.) So perhaps the investment flows will be going in different directions this time around…

We mentioned Drake earlier this week in Ab chao magna. If ever there was an investor willing to take on risk in pursuit of high returns, it would be him. Attacking Spanish treasure vessels in an attempt to plunder the golden yield they bear in the hold is about as risky as it gets – and while he was richly rewarded for taking that risk over the years, it killed him in the end.

We call it “liquidity risk” today when we can’t get our money out of an investment quickly without losing money – investors in Neil Woodford’s investment funds when they seized up know it only too well. But for Drake, “getting his money out” meant burying tonnes of pillaged gold and silver on a beach in Panama for later retrieval because he and his men couldn’t carry it all. Forget getting out of the venture at a lower price – there was nobody to sell these assets to!

Hopefully we shan’t encounter such “old school” investment risks in our lifetimes. But it’s worth burying some gold and silver, just in case.

That story of Drake burying his loot inspired many of the tales since of lost pirate gold with accompanying treasure maps. While we don’t have folded piece of parchment where X marks the spot of hidden riches, Charlie Morris over at The Fleet Street Letter Wealth Builder does have the next best thing: a treasure map to show you what assets to buy in any investing environment. More on that to come…

It’s not just us using nautical metaphors these days to describe the current investing environment. I was interested to see a presentation from Variant Perception recently – a research firm for institutions and other large investors – taking a similar tack.

To its eyes, the blending of both central bank stimulus and government spending this year has fundamentally changed the investment “weather” in the markets. And it’s stormy seas ahead for those who are yet to take note of it:

We have come from the “Lake Regime”, where rises in inflation are less likely to become disorderly

We are now in the “Ocean Regime”

Lake-going vessels are not suitable for ocean travel, as are many portfolios not prepared for high inflation

The Ocean Regime does not mean high inflation and a weaker dollar is imminent, but it does mean the balance of risks have changed

Once inflation becomes unanchored, it is too late to take action. Portfolios should begin to be made more inflation-resilient today

There are 3 main implications of moving to the Ocean Regime:

I agree with all of the above.

While much of the world is locked indoors, the weather outside is changing. Nathan Tipping will be writing to you tomorrow with some frank advice on how to survive the coming storm…