To the reader who is asking, I am indeed in need of a shave. But back to that in a minute.

I always enjoy looking through my mailbox to read your feedback on my scribblings (for new readers, that’s [email protected]). The broad range of backgrounds this letter manages to attract never fails to amaze me. We are all here for the same thing of course – to protect and grow our wealth – but I am often taken aback by the variety of life experiences that desire brings to the table.

Hearing from bomb disposal experts, diamond miners, soldiers, neuroscientists, doctors, cab drivers, and simply from hard working men and women who have taken the time and care to send in their thoughts is a very humbling experience, and I sincerely thank you for all your insights and feedback, be it positive or negative. I’m afraid I don’t have the time to respond to everybody, but I read them all – and every now and then we’ll take a look through the mailbag in this letter to share them with other readers.

I asked you about your experiences with inflation recently, after a reader over at Southbank Investment Daily wrote to my colleague Nickolai Hubble in which he described the high inflation of the 70s as a positive influence on his life. While I’ve argued before in this letter that a cunning politico in the future might try to use inflation to redistribute wealth from the old to the young to gain votes, I’d never heard somebody say it was actually a good thing for them in their youth – and I wondered if many of you had a similar view.

We’re writing about what might trigger rapidly higher inflation akin to that 70s period in The Fleet Street Letter Monthly Alert at the moment – but I never experienced the 70s, so I have no experience to draw upon than what others have written down.

Here’s how one reader described their experience:

I was 13 years old at the time inflation took off in the 1970s. By the time this had finished my family was reduced to penury. For 4 years in a row average rates were about 20% and my dad’s savings were completely wiped out. Middle class Britain had been reduced to a barter economy. I remember my Dad wistfully thinking he should have bought gold to protect himself.

The experience left a lasting impression on me.

These days, not having bought gold at $850 an ounce would feel painful.

It hit $1,800 in the futures market yesterday, nudging ever closer to the all-time highs hit in the early 2010s… 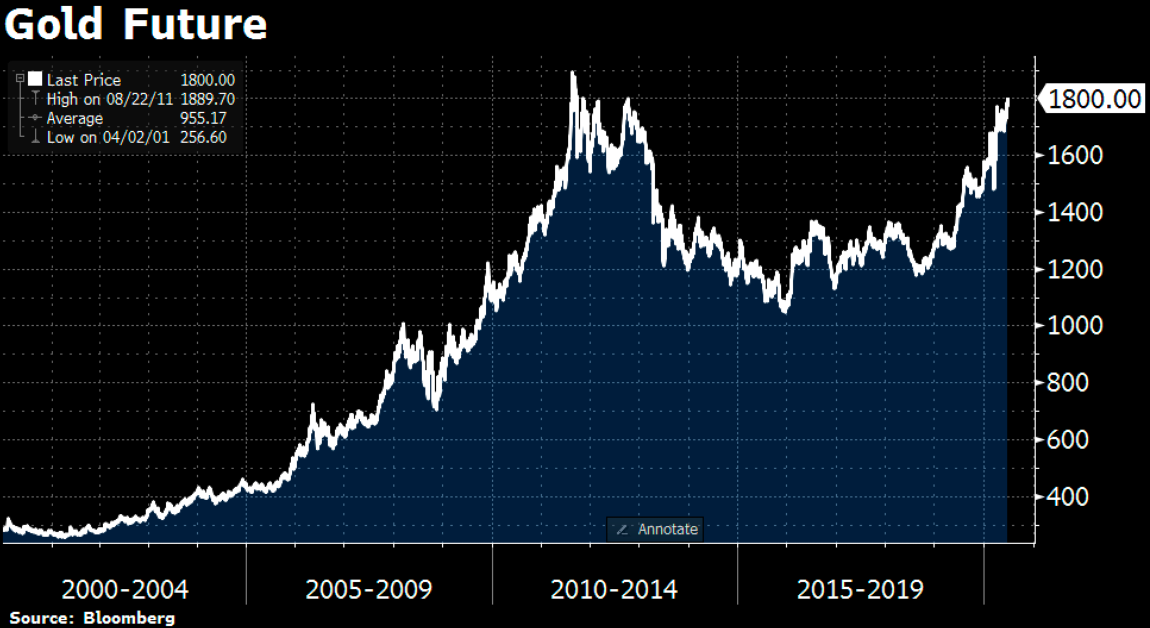 We’ll explore some more of your accounts of inflation tomorrow. Why one of you is interested in the length of my facial hair, I don’t know. But it does tie in with something I was planning on mentioning, so I’ll run with it.

I am direly in need of shave. When the lockdown started, our energy analyst Kit Winder, who works with James Allen over at Exponential Energy Fortunes, challenged myself and a few other colleagues to hold off on shaving until the lockdown was over.

I am the only one of the group challenged to remain in the game. My beard and hair are now at “all-time highs” in length, unshorn now for months on end.

A colleague said it complimented me on Friday, giving me a “man of fortune” aesthetic. And the ladies like it, which is always a plus. But this bull market in hair is becoming something of a hinderance with the high temperatures we’re experiencing in London.

Kit, meanwhile, caved to the razor after only a few weeks into lockdown. He even gave himself an accompanying homemade buzzcut to boot. Not exactly a testament to his endurance – but it seems to have paid off in other ways. Like some kind of “inverse-Samson” effect, Kit’s work with James has been leading to incredible trading returns for their subscribers at Exponential Energy Fortunes.

Their portfolio has been flying. Just yesterday they told their subscribers to sell half of their stake in an ascendant renewable energy company after it had risen 393% in seven months. This isn’t their first spectacular gain either – it was only two-and-a-bit weeks ago I was telling you about the 593% gain they’d just harvested from Nikola Motors ($NKLA)!

James, who has also been shearing himself during lockdown, remained classically modest in his instruction to subscribers:

Yes, James. “Very decent” indeed. It really is ok to revel in the victory once in a while you know!

But that’s the thing with James – never wants to “dip his headlights” and let his focus down. Isn’t one to “switch off” easily. In fact, the man’s damn near paranoid of missing any signal – be it an opportunity, or a red flag – that he can use to make better investment recommendations, and thus generate the most wealth for his subscribers.

It’s a tough act, to stay wired like that all the time – but it’s an approach which is paying off handsomely for his readers.

I guess it helps not to have hair in the way while he’s at it.