Caught between a bull and a bear

Caught between a bull and a bear

It’s Kit Winder here. As Will mentioned yesterday, Boaz is away this week so I’m covering for him today and Thursday.

Today I want to take a look at one of the key arguments for why gold is rising. I’m worried that one of the reasons might not be on such solid ground…

So here’s the question:

If oil prices rise then inflation rises too, right?

And that would push the gold price up, right?

Well perhaps it’s not quite so simple.

I have argued that inflation is coming, and that gold is the best asset to hedge against it.

I’ve been interested in trying to understand the mechanics of inflation and the energy market too, given that the energy transition is a key focus of mine.

Meanwhile, oil prices have crept back up from their remarkable adventure below ground.

Rob West, a guest on our Beyond Oil Summit just a couple of months ago, was among the first to suggest that slashed capex from oil majors and behavioural shifts by people after Covid-19 (more passenger cars, less public transport, plus recovery spending) could see oil demand rise above 2019 levels while supply dwindled.

This would lead to hefty oil price spikes, as soon as 2022 perhaps. Still now, almost no one else is seeing this coming.

It’s always interesting to investigate a truly contrarian view – I hate consensus as nothing is ever set in stone.

And last week I spotted that Goldman’s oil price targets for the coming years were significantly above consensus too. So perhaps the winds are shifting.

The question today is this.

Can gold investors look to oil prices to offer support for the current bull market?

The consensus view is that higher oil prices are a trigger for inflation, which you’d think would push the gold price up.

Recently though, I came across an interesting argument against that theory, from Alan Livsey in the Financial Times.

Let’s dig into it.

When oil prices rise, a key input to economic activity goes up, and businesses pass on the cost to consumers.

That’s not a rapid process, but inflation expectations would tick up immediately in anticipation.

That part is pretty straightforward and hard to argue against.

The cost of fuel is, after all, a key input to published inflation metrics in the UK or US. Energy prices carry an 8% weighting in the American inflation calculation, for example, as they constitute a key part of a household’s expenditure.

Famously, oil price shocks in 1973 and 1979 both contributed hugely to the extreme levels of inflation seen in that decade.

In fact, this forms a part of my thesis for higher than expected inflation in the coming years.

Not because oil prices are definitely going to rise or spike, but because I think it’s more likely than I think other people do (if that makes sense!).

But there is a challenge to the view that this won’t necessarily lead to higher gold prices.

Because rising oil prices have other effects, and the world is different now to back in the 1970s.

One possible consequence of rising oil prices sending inflation expectations higher, for example, is that the bond market gets hit hard.

The link between oil prices, inflation, and bond prices could end up offering a nasty surprise, and to bond holders this is an especially important consideration.

If inflation expectations rise, the value of a bond that pays you £100 in two or 20 years’ time goes down accordingly, because inflation will erode the purchasing power of that £100.

And with bond prices as high as they have ever been (measured by record low yields on government and corporate bond markets – see below) there is ample room for bond yields to rise – ie, the price to fall. 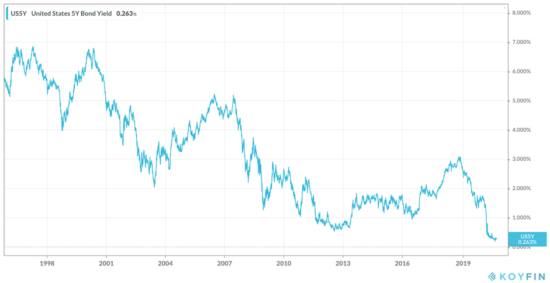 For example, the rebounding oil prices in 2016 (red line) caused a sell-off from bonds which lasted over two years, causing the rise in yields (blue) that you can see below. 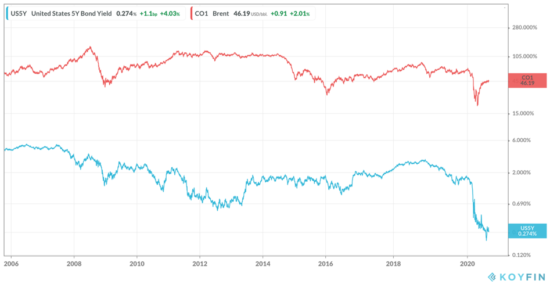 There is a degree of correlation there – enough to say that it’s a factor, but not the only one.

This year, both collapsed in tandem, but bond yields have not bounced in line with oil prices.

The interesting question is whether a spike in the oil prices could cause yields to rise enough to make the recent uptick in inflation expectations irrelevant.

But what does this have to do with gold?

Here is how gold (blue line) and Brent crude prices (orange) match up over the last five or six decades: 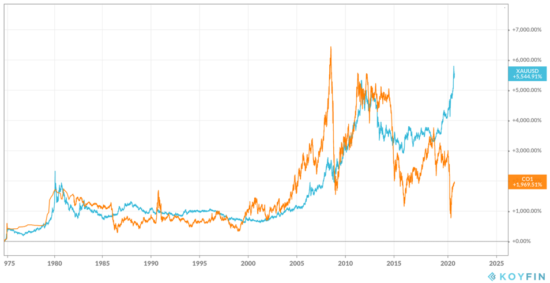 There is clearly a historical correlation here. Higher oil prices seem to correlate with higher gold prices, although oil has been more volatile. Since 2019 though, the link has broken dramatically, leading to the widest gap ever.

So, what could the function be which links the two, and what has changed?

Well one argument supporting the gold price boom of late has been falling “real” yields.

This is the idea that if interest rates fall or stay flat, while inflation rises, the “real” yield on an interest-bearing security is going down. This is due to the loss of purchasing power from inflation exceeding the interest rate, or “yield”.

As gold has zero yield, famously, it becomes more attractive as real yields fall. This is especially true when they go negative. Real yields and gold have correlated closely this year.

Here the chart for real yields on ten-year government bonds in the US:

This theory goes that gold is surging because inflation expectations are higher than US government bond yield expectations.

The counter argument is that oil prices rising further would cause bond yields to rise more than it would cause inflation to rise. This means that spikes in the oil price might not be the helping hand gold investors expect it to be.

Inflation will be good for gold but bad for bond prices. You could make an argument that with bond prices at such high levels (yields therefore at such lows), inflation would have more of an effect on bonds than on gold, which has already surged. If bonds are hit more than gold is boosted, the change in real yields could impair gold’s glittering run.

This has never been true before, you might say, pointing to the oil price vs gold chart pictured above, but then again, bond yields have never been this low either. That makes them fragile, ripe for a reversal you might say.

And if you can get 3% or 4% on a US government bond, why would you still hold your gold?

So the theory goes anyway…

The point is, you might think that inflation rising is definitely a good thing for gold (and I myself have argued before that inflation is likely and gold is the best answer to it).

But for myself and for you, my readers, it’s worth realising that it’s not quite so simple.

If inflation does rise, perhaps because of an unexpected surge in oil prices, then the bond market carnage could outweigh the inflation implications.

So remember, think in real yields, and don’t just take things on first principles either.