The oil price in the US began Monday at $12.

Reduced to watching the oil price tick up and down in self-isolation, I was stunned to watch West Texas Intermediate (WTI) fall to one cent per barrel… and then plunge lower.

But the website I was watching the price on didn’t have the capacity to print a negative oil price – so the chart just hit zero and then stopped dead. It was like I was watching a thriller on TV and the signal had cut out in the middle of the climax.

I had to turn to my newly created Twitter account to discover the ending of this particular movie that the price of a barrel of oil in the US had hit an incredible -$40. But don’t worry folks – from this new all-time low it managed a rally, and at the time of writing it now stands at a mere -$4.53 per barrel, a price increase of over 80% just this morning.

Is it a bull market, or “boom”, if the price goes from deeply negative to less negative? We’ll have to see how the market parlance adapts to this very strange situation in the days to come… 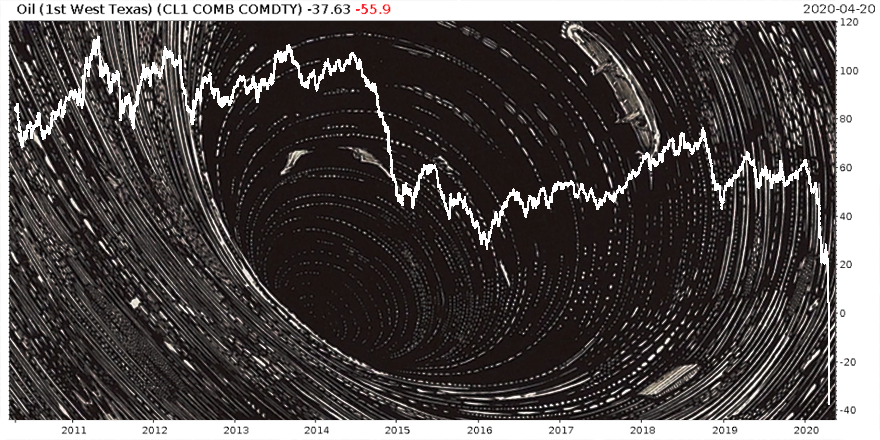 Rumour is some fella in France made a $100 million bet in the derivatives market that the US oil price wouldn’t hit zero, let alone go negative. If you turn that chart upside down, you can see his heart rate.

What’s driven a negative price for WTI is the lack of storage capacity for all the crude oil that has accrued in the US. There’s just no space to put it all, because nobody is consuming it; as a result, the market is rewarding those who will simply store the supply glut.

The presence of this deeply negative figure in one of the most widely referenced economic indicators used by investors goes to show just how far down the rabbit hole we’ve come. Good/bad? This is simply the reality of storing thousands of barrels of oil when nobody wants to burn it.

However, a low oil price – hell, a negative oil price – in the US is very simulative for the economy. A negative cost of energy is effectively a market-granted subsidy for any economic activity. But at the same time, a negative price reveals that market participants are incredible bearish on anything happening in the largest economy on earth. And that sure as hell doesn’t bode well right now.

It certainly doesn’t bode well for the frackers in Texas – they’ve a lot of debt coming due this year. And next year. And the next…

The Fed or the US Treasury is gonna be bailing out these guys if Washington wants to keep bragging about US energy independence: 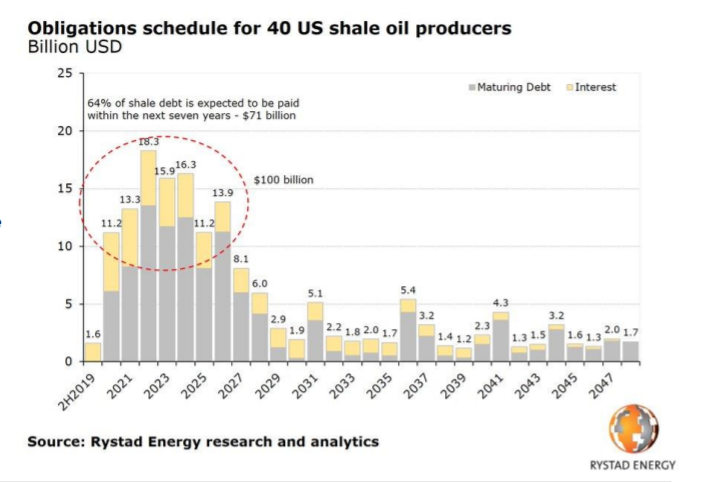 Earlier this year, we hosted an event called “The End of the Bull Market”, after our publisher Nick O’Connor felt certain we had reached the end of the economic expansion and that our readers needed to be prepared for what happened when asset prices stopped their endless ascent. As fate would have it, the bull market actually ended just a day or so after that event as the world rapidly entered “the WuFlu zone”.

In another twist of fate, as WTI crude oil gets a negative price, our Beyond Oil summit is just beginning. The first video, free to watch, will be an interview with energy expert Mark Lewis, with a telling subject line: Peak Supply – The Surprising Way Oil Dies.

Oil crossing the Rubicon into negative territory is an historic event. However, we should put this in context. Like I say, this was the American benchmark – West Texas Intermediate – and not Brent crude oil, the more widely adopted benchmark globally which we use here in the UK. Brent has not experienced anything like what happened to WTI – the issue of storage has not arrived to the Brent market, or at least not yet – and at the time of writing is “plus” $26.

When I discussed negative oil prices with Kit Winder last week, an oil industry veteran – writing in from my hometown of Aberdeen no less – chided us on our discussion of the oil market, citing Brent as a far more important measure of the oil industry:

I listened to your Friday broadcast with interest and have many comments to make, almost certainly too many for one email.

I started work on 1 September 1973, days before OPEC quadrupled the oil price. Since then I have been an oil and gas project economist, planner, management accountant and petroleum engineer, in that order of durations. I have worked for BP, Shell, the engineering consultancy Petrofac, training company MDT International and oil and gas economics consultancies Aupec and Ae Energy Economics, plus as an independent…

Negative oil prices are only ever going to be a niche issue, not one of any real significance to a retail investor. If you are a Canadian heavy oil producer well, hard luck. You have oil that probably sets solid at low ambient temperatures, it probably has to be blended with someone else’s oil to make it of marketable quality and you are at the end of a long pipeline (if that is, First Nations and other hostile interests have allowed you to lay one in the general direction of Cushing, Oklahoma and its jam-packed storage).

Crucially the logical response to a negative or other uneconomic price is to shut in some or all of your production and wait for better times. Given a large, non homogeneous oilfield you may be able to do the equivalent of the miners’ high grading by only producing from wells with low operating costs per barrel. Highly fractured reservoirs like fractured granite ones west of Shetland and some fractured rock types in the North Sea show wellbore storage effects, producing at a higher initial rate after a shut-in period.

Your talk of $18 oil when Brent is at $28 is misleading, I would almost say inflammatory but cannot find the right word. WTI is not a good benchmark. Its quality is a little higher than that of Brent crude and it has traded for significant periods around $2 above Brent, which may be close to its true value. Shipping costs to Europe are higher than those for Brent, to Asia and Africa much the same as Brent and to South America less than Brent. If WTI were priced at Houston Harbour it would therefore always be close to the Brent price. The price at Cushing, Oklahoma involves netting off 512 miles of (variable) pipeline costs, (variable) storage costs and distress discounts when the tanks are full and you have been foolish enough not to shut in your wells.

The broad range of professions and backgrounds in our readership never fails to surprise me. I take your point regarding Brent as a superior benchmark for the oil price, though I can’t help but think that the arrival of negative oil in WTI following your letter suggests negative oil has become more than simply a niche issue. Outside of WTI crude, 13 other “crudes” in the Americas, from Alaskan to Albertan to Dakotan crude oil, went into negative territory yesterday.

From negative interest rates to negative oil prices… where will we see the hyphen symbol arrive next..?