Just look at this thing: 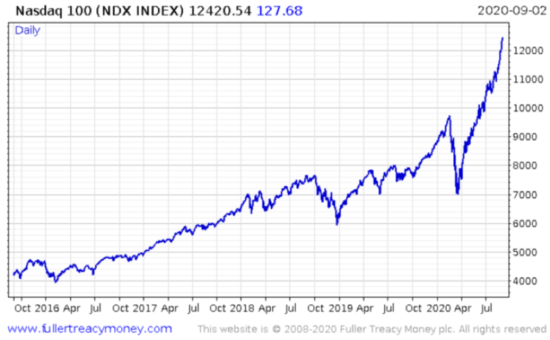 Tripling since the lows of 2016, the mighty Nasdaq index stands tall. The WuFlu has not been a hinderance; quite the opposite. It’s acted as an accelerant, like some kind of performance-enhancing drug. A steroid inflating the index at a speed and to a size never seen before.

When you hear about all the wild post-March stockmarket action, most of it is taking place in this index, which favours US tech companies – Facebook, Google, Amazon… and Tesla, which has a chart so obscene that it should come with an age restriction, and which I will not include in today’s letter for fear of driving the discourse off course.

But it ain’t just tech names that are in the Nasdaq. There’s Costco, Pepsi, Starbucks and plenty of pharma stocks in there too. Strip out the tech from the index, and the performance is still extreme: 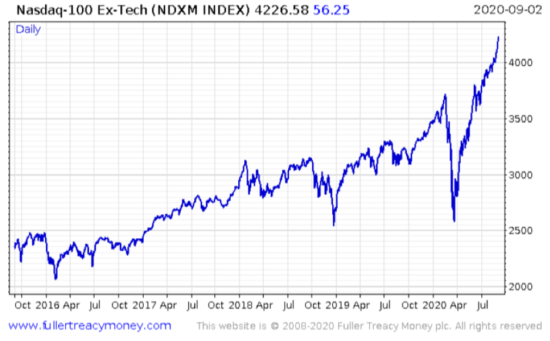 While the Nasdaq minus tech has “only” doubled since 2016, the WuFlu has similarly accelerated its ascent. The trajectory since March ain’t far off vertical.

Regular readers of this letter may well recall how cynically bullish I became late last year. From late summer into Autumn, everyone and their dog was talking about an upcoming recession and the end of the bull market which began in March 2009.

While I’m traditionally a pretty bearish fella, the crowd is rarely right – especially when predicting recessions – and I mentioned in several of my notes that it was time for a melt-up (for example: Melt-up incoming? – 19 August 2019). One last hurrah, a final cathartic squeeze higher before a crash.

Things appeared to be going my way at the beginning of the year, but the crash in March made me question everything. Shoulda stuck to my guns. There’s so much heat in this market, so much “melting up” going on, that it’s all starting to look like a damn Dali painting.

I remember soon after the crash in March, my colleague Nick O’Connor observed that while you’d normally expect a melt-up before a melt-down, he was beginning to think the reverse might happen. With central banks hammering “ctrl+P” like there’s no tomorrow, he thought there was no way the stockmarket wouldn’t recover, and rapidly. He was right – this time around, the melt-down came first, and melt-up right after.

And money from the everyman just keeps on flowing in: 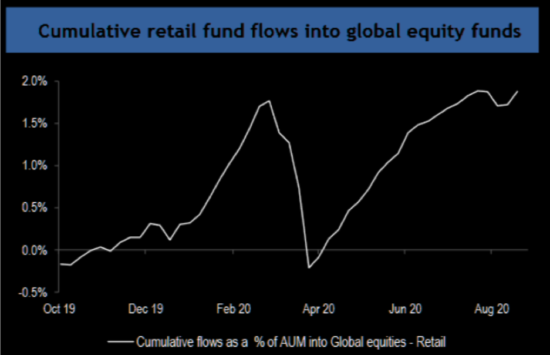 At least some of those billions will be heading into the Nasdaq. A dysfunctional quirk with the passive investing industry is that the more a certain stock goes up, the more capital it attracts from passive funds, as said funds are only trying to track the market. It’s a cyclical relationship which we’ve only really witnessed to the benefit of passive investors over a sustained period of time.

It can, and will, work in reverse at some point in the future however – lower stock prices leading to less cash being allocated to those stocks from passive players, leading to lower stocks, etc. But that’s a theme to be explored another time.

Remember the VIX index – that esoteric measurement of stockmarket volatility I wrote about in yesterday’s letter? One detail I neglected to mention is that the VIX only measures the perceived volatility of the S&P 500, another, more commonly referenced stock index than the Nasdaq.

However, the Nasdaq has a volatility index of its own: the less catchy “VXN” index.

Prior to March where everything was rosy in the Nasdaq (though not quite as rosy as it is now), volatility was incredibly low. March saw a nuclear explosion which then subsided. But even during the subsequent melt-up we’ve been experiencing, volatility has not fallen back to its lows at the beginning of the year.

This market is not becalmed, it’s still feverish. And volatility has started to increase yet again… 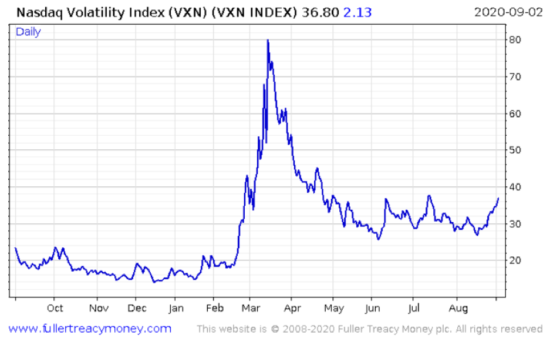 Just as I anticipated gold and silver would pull back having ascended too fast, I reckon we’re due for a pullback in this colossal tech-boom in the near future. Not a crash, I don’t think – but that’s just my £0.02. When the market is getting this wild, and the standard valuation metrics no longer seem to apply, you can only rely on instinct…

That’s all for today. In tomorrow’s note, we’ll take a look at the results from our election poll (if you haven’t voted yet, please do so here), and I’ll introduce you to a new analyst here at Southbank Investment Research who you’ll be hearing more from in the near future…

PS Considering all the capital flowing into tech we’ve explored in today’s letter, you may well wonder what much of it is gonna be spent on. Kit Winder takes a shot at this in today’s Exponential Investor, where he lays out what “the next big thing” for tech investors is gonna be – and why the mainstream media is wrong about California.