SODERMALM, STOCKHOLM – “So Pfizer waits until two days after a disputed election is “called” for Biden and six days after the election itself to release details [of a vaccine] they’ve probably had for weeks? Well, nothing to see here…” – Brad Huston (possibly a pseudonym), market commentator

I must say, the timing of the vaccine announcement is, uh… impeccable.

The announcement of a WuFlu vaccine has flipped the market narrative “overday” from lockdown tech to reopening reflation. The founder of Zoom Video Communications ($ZM) bled $5 billion in net worth yesterday as his share stack got devalued by the market… 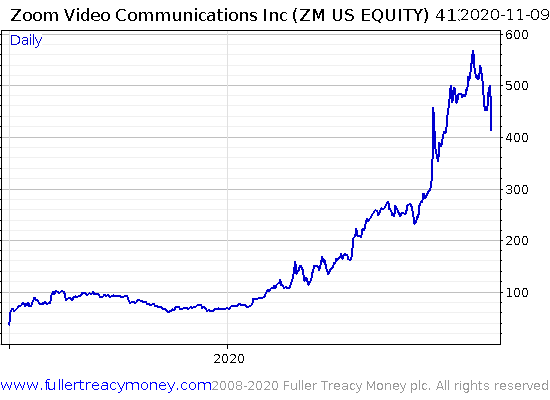 … while airline stocks like International Consolidated Airlines (parent company of British Airways) finally went up for once: 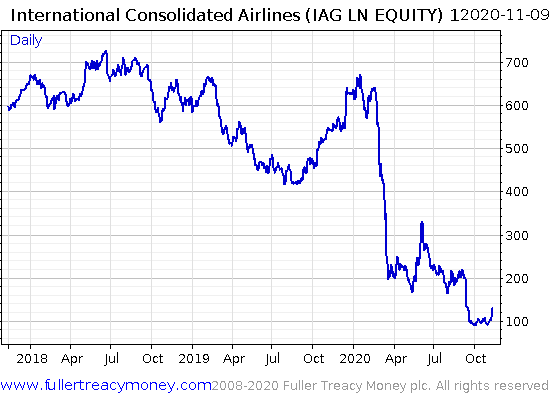 You’d think Pfizer ($PFE) would be star of the show, but while the stock got juiced hard yesterday, the real winner of the vaccine narrative (both in buildup and from the reveal) is the company it’s partnered with to beat WuFlu: BioNTech ($BNTX). If you’d bought that baby last October, you’d be looking at a near 10x gain in just over a year… 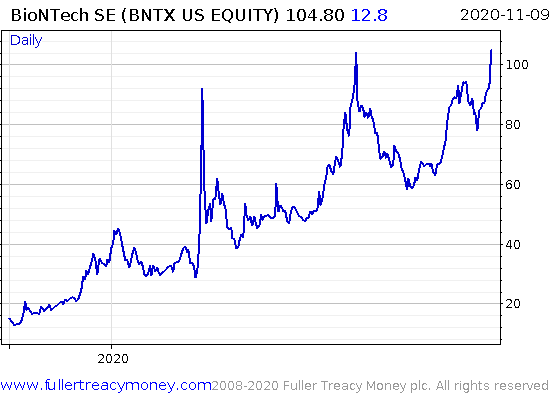 Markets everywhere have been boosted by the news (you’ll likely have seen headlines of how the FTSE, full of pharma, has finally had a good day). The question I’m pondering is how long will the good times last before the government pours water on the parade with further announcements that lockdown restrictions will remain for longer than the market hoped.

The beaten-down stocks – airlines, oil companies and hospitality companies – have finally got some relief. Will they be able to assert a new trend up for the time being, despite still being grounded? And will the tech surge, which has dominated the year for so long, have enough inertia to keep itself going in the meantime?

I’m leaning yes to the former, and no to the latter… but that’s all speculation on my part. By the end of this week we’ll know more – unless the US election flips the whole thing on its head. I still think Donald Trump is going to win. Either in an insidious attempt to bend public opinion, or simply because they were too keen to believe Joe Biden had it in the bag as he’s their preferred candidate, the media has made a serious error and gone way out over its skis in declaring Biden president when the result is still being contested.

To navigate your portfolio through the havoc to come – from WuFlu, the election, and whatever else awaits this God-forsaken year… you’ll need a map.

Charlie Morris has one that he’s been using to navigate the markets with finesse for decades. It shows him what route to take to find treasure – what assets to buy to make money – depending on the market’s “weather”.

Is it the right time to own gold, or tech, or commodities, or utilities, or industrials, or consumer staples, or energy, or something else entirely? No matter which direction or how hard the market winds are blowing, Charlie’s map will show you where in the market the treasure is buried, and how to set a steady course for it.

As you might imagine, Charlie keeps his map (recently updated to include bitcoin) close to the chest. But in recent days he’s come around to the idea of sharing it more widely… and tomorrow, you’ll be hearing more from him – keep an eye on your inbox.

Believe it or not, our very own biiotech analyst actually beat that recently – and he didn’t even need to develop a WuFlu vaccine. Gerard Pontonnier over at New Drug Speculator (it does what it says on the tin) got his subscribers out of a stock last week for an incredible 1,297% gain – nearly 13x!

He tipped his readers off about the share midway through last year, and sold half for an 800% gain a few months back. Selling this remaining half was the cherry on the cake for an incredible service he’s doing over there. I really should write about his work more here at Capital & Conflict – if I don’t, remind me…