A Cold War with lockdown characteristics

A Cold War with lockdown characteristics

My colleague Nickolai Hubble has always told me one of the joys he has in his role in publishing his research is seeing his predictions play out in the news months later.

It’s something I expect James Allen has been revelling in – and indeed, what his subscribers have been profiting from, after he got in on to the hydrogen energy train before the mainstream investment crowd cottoned on to the story developing there…

It’s bittersweet to get something like a Second Cold War prediction right, however. While it bolsters what I’ve been writing about for well over a year now, seeing overdue opinion pieces like this in the Financial Times isn’t particularly heartening. In fact, it’s pretty frustrating to see voices in the mainstream media only now publicising what’s at hand:

The cold war between the US and the Soviet Union was a titanic 45-year ideological, economic and technological struggle that took the world to the brink of nuclear Armageddon, touched almost every country and stretched to the moon.

The cold war developing between the US and China is a very different kind of competition in a very different era, but may be no less dangerous and consequential. For the US, China will be a far more formidable foe, given its demographic weight and technological ambition.

The struggle will certainly be more complex and multi-dimensional. While the US and the Soviet Union were hermetically separate, the US and China are intimately entangled in economic, technological and cultural terms.

Yes, thank you FT, do tell us something new. While it’s gratifying to see the mainstream news echo what I’ve been writing about for almost two years now, it also means I need to get my ass in gear. If these guys have caught up, it means I need to get ahead of the curve, and pronto…

The lockdown has put a very interesting slant on Cold War II as it has increased so much activity to the cyberspace, where China has spent vast amounts of resources on gaining an advantage. A director in the FBI claimed six years ago that the People’s Liberation Army had 270,000-300,000 people working cyber espionage, and that was back then, and just the PLA, not all Chinese government agencies.

Fast forward to 2020 and everybody is using their devices more than ever as we’re stuck indoors. The kids are churning through the hours on TikTok, the Chinese-owned app which spies on them. The adults are whiling away their work hours on Zoom video conferences where they are also spied on by the Chinese Communist Party (CCP), as the app’s security is severely compromised.

It gets better though – such is the influence of the CCP over Zoom, it’s actually been censoring people using it in the US!

Zoom has admitted it suspended the accounts of human rights activists at the behest of the Chinese government and suggested it will block any further meetings that Beijing complains are illegal.

On Thursday the video conferencing platform was accused of disrupting or shutting down the accounts of three activists who held online events relating to the Tiananmen Square massacre anniversary or discussing the crisis in Hong Kong. None were given an explanation by Zoom.

Following media reports, late on Thursday Zoom said it had been contacted by the Chinese government in May and early June about four Zoom meetings to commemorate the Tiananmen Square massacre that were being publicised on social media…

It is unclear why the company would shut down the accounts of Zoom users based in the US and in Hong Kong. The account of Zhou Fengsuo, a Chinese activist based in the US, was shut down days after he hosted a memorial for the Tiananmen crackdown…

US lawmakers and human rights groups have condemned Zoom. US representatives Greg Walden and Cathy McMorris Rodgers sent a letter to Zoom CEO Eric Yuan calling on him to clarify his company’s practices. US senator Josh Hawley asked Yuan to “pick a side: American principles and free-speech, or short-term global profits and censorship”.

“Tech companies should stand together to resist Beijing’s censorship demands and uphold the right to freedom of expression. Otherwise, the grovelling will never end,” she said.

Back in the mid 2010s a US company behaving so egregiously as to censor American residents at the behest of the CCP might have been able to get away with it. The political and business establishment foolishly believed that in order for China to liberalise and become more progressive, the CCP’s delicate commie sensibilities had to be respected.

But these days, this kind of nonsense isn’t going to be tolerated by increasingly hawkish developed nations moving into Cold War mode, restricting CCP influence within their own borders. Companies in the developed world who try it are going to get hit with a very large government stick sooner or later.

Zoom Video Communications ($ZM, not to be confused with Zoom Technologies), has soared amid the lockdown and the aforementioned boom in teleconferencing. But if I were invested in it, I’d be watching for a backlash from the US government like a hawk, and getting the hell out when I saw it… 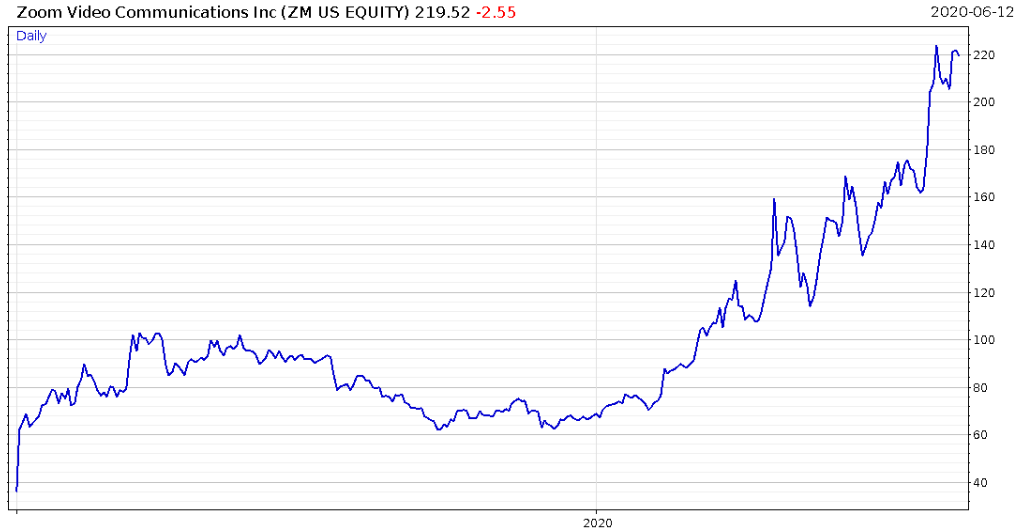 Like I mentioned earlier, I need to get a move on in getting ahead of the curve on this – the Cold War is getting faster.

Meanwhile, on a more positive note, the US Senate is backing funding for a resumption of nuclear weapons tests. Remember those? The last one took place in 1992. But the US has finally found an excuse to get nuking again. The future’s so bright, you gotta wear shades…

The year of our Lord two thousand and twenty just keeps on delivering the goods. Remember this chart of Tesla I showed you a month ago (A Looney Tune you don’t want to miss – 10 June)? Source: me, on…

Finding freedom and fortune outside the UK

A buddy of mine has had enough – he’s getting out of here. It was the first time we’d seen each other since the lockdown began. I could tell he was somewhat different when I met him, and not just…