It felt odd going back to the pub after three months of drinking in private.

But it got much weirder after a stranger began speaking to me about my hat.

I was standing in the queue outside with my girlfriend. Social distancing rules prohibited many tables being occupied, so any beer would have to be consumed outdoors.

What with it being 4 July, I was sporting my New England Patriots cap. I bought it a few years ago in New York, partly because they’re my favourite American Football team, and partly to wind up the perpetually offended types who hate the team simply because Donald Trump is a fan.

As we waited in line amid the mild evening air, this chap in front wanted to chat about “the Pats” with me. Following the departure of Tom Brady from the team (arguably the best quarterback ever in American Football), there has been much debate about what motivates his replacement – Cam Newton – who has accepted a remarkably low compensation package for the role.

I thought I was speaking to “Joe Sixpack” to begin with. But as our conversation continued, and I asked what he did for a living, I realised something was amiss. He didn’t reveal much and certainly didn’t brag, but I soon realised I was speaking to one of the richest men I have ever met. And not just that either – he is one of the few individuals to have become stupendously richer since the lockdown began.

This unassuming beer-drinking sports fan happens to be a key early investor in Shopify ($SHOP). Shopify is a platform that simplifies setting up an online store without being under the umbrella of Amazon or eBay. For a fee, users can quickly set up their own e-shop with its own branding and web address.

The ecommerce industry has been growing strong for years, and $SHOP with it, but forced lockdowns have injected adrenaline into the dynamic. Not only has the increased internet usage from the everyman created greater opportunities for ecommerce, but the service has been a lifesaver for many businesses in lockdown which have had to rapidly go online.

Investors have not wanted to take any chances with missing out on the opportunity. To put it very lightly, the stock has gone bananas: 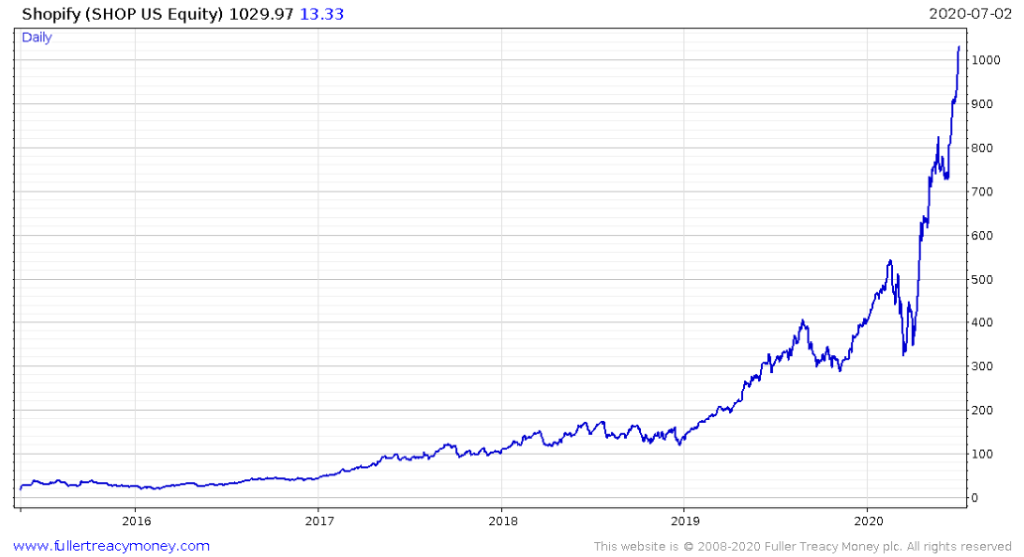 $SHOP is up roughly 1,000% since the beginning of 2019. A ten bagger, in a year and a half. And as you can see, much of that gain has been realised in the last few months.

Taking a look at the price on a logarithmic scale, where percentage increases remain even (an increase from $100 to $200 is the same in height as an increase from $200 to $400) and the rise of the stock is like some force of nature, reminiscent of bitcoin in 2017: 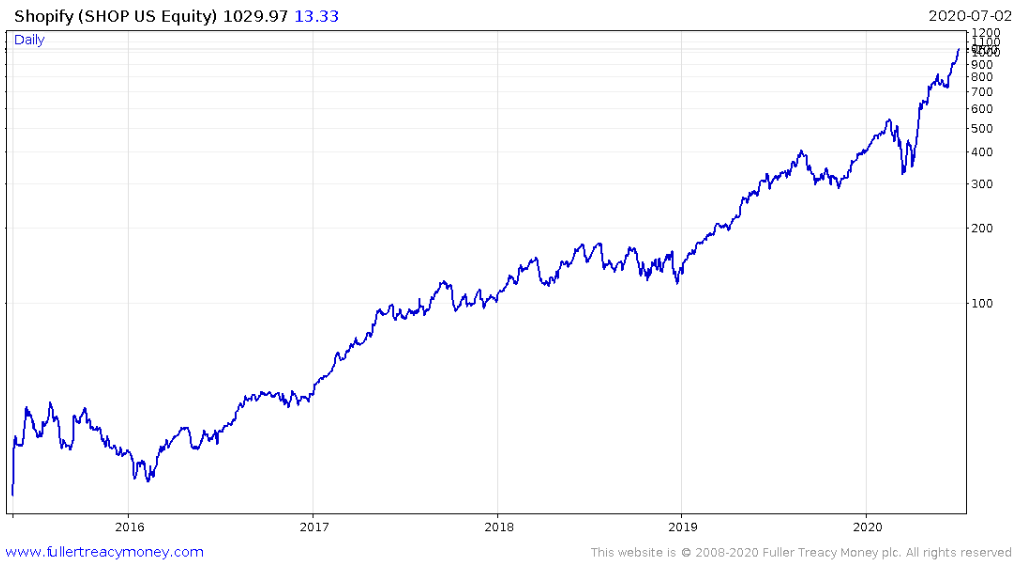 I won’t reveal who he is, but I suspect that chap at the pub is already a billionaire. If he isn’t, at this rate he won’t have to wait long before he is.

It’s not just stakeholders experiencing this blood-rush of capital gains though. This from a Forbes article back in February, before the panic in March:

[the stock] has also become a millionaire factory for Shopify’s 5,000 workers, who sit on stock awards worth $2.2 billion. Shopify’s stock price has become such a distraction at headquarters that any employee caught checking the stock price must buy a box of doughnuts from Tim Hortons for their team.

The share has more than doubled since then. I’d suggest investors start buying stock in Tim Hortons, but sadly the company merged with Burger King back in 2014…

Following on from yesterday’s note, this is all very evocative of the dot-com boom. Skyrocketing valuations and vast riches suddenly materialising off the promise of the internet into the hands of relatively young disruptors. I find it very hard to imagine the stock maintaining that incredible incline on the chart.

Though this time, stocks like $SHOP are actually delivering a service, rather than just a promise of the future. But while I’m a big believer in the service $SHOP delivers (“Amazon is trying to build an empire, Shopify is trying to arm the rebels” its founder claims – a strong brand image these days) the price is the price, and right now the price is damn high.

$SHOP’s stock price divided by its earnings, its “P/E ratio”, stands at an incredible 287 at the time of writing. For context, the historical average P/E for the US stockmarket since 1917 is 15, and stands currently at 22.

We speculated yesterday that perhaps we’re only in the middle of the “Deux Com Boom”, and maybe there’s still juice in the tank for tech stocks like Shopify… but I’ll need a few more pints before I start thinking the gradient on that chart can get any steeper.