My beer fast for Lent has finally come to an end. While I’ve cut it shorter than originally intended at a month rather than the full Lent period, I’m happy with where I’ve got.

From relying only on beer for my calories over the last four weeks – no food, milk, or food substitutes – I’m quite a bit lighter. I’ve lost a pound and two stone during this little experiment (a little over 13kg for the metrically inclined) not to mention any hint of a red complexion from my face.

A remember a colleague of mine in my door-to-door sales days opining that you don’t get a beer belly from drinking beer: it’s the appetite that beers give you for junk food that grow your gut. Having lost five inches from my waistline on the beer-only diet, I’m beginning to think he was right.

I don’t think I’d recommend this diet to anybody, as I’m sure it’s very unhealthy. That said, it is good exercise for your willpower. You’ll find that many of the things you’d normally enjoy cease to be stimulating when all your body wants is a solid meal. Birthday celebrations, conversations with friends, strong investment returns, or even just a nice cold beer fade into background static. You are forced to question what you really enjoy, what you really value in your life – which are always questions worth asking.

Joking aside, that IPO (the date has yet to be announced) is an event to keep your eye on, for it’ll be a key indication of market sentiment.

Had Deliveroo been a publicly traded stock during the lockdown, it would have blown the ceiling off like all the other lockdown stocks over the past year (Zoom, Shopify, etc). How it performs when it goes public now, when lockdowns are on the wane, will reveal if there’s any momentum left in the lockdown trade, or if that ship has already sailed. It may also reveal if the market thinks public behaviour has permanently changed regardless of further lockdowns – e.g. will people keep ordering Deliveroo frequently even after the lockdowns are over?

The rise of interest rates in the bond market beginning late last year have confounded both of these assets. The question now is whether this rise in rates will be allowed to happen by the central banking community – I think that’s a solid “no”, but the Federal Reserve meeting today will tell us more.

In the meantime, in what appears to be an emerging tradition for this letter, I have received yet more suggestions as to what the collective noun for gold sovereigns should be. This week, we have a “regality” of sovereigns, the exotic “suzerainty” of sovereigns, and a “valiant” of sovereigns.

That last one is an interesting suggestion, for back in 2018 the Royal Mint began minting a 10oz silver coin called a “Valiant”. In many ways this is a rival to the gold sovereign, as both bullion coins bear an image of St George slaying the dragon, and in price terms, they cost a similar amount: a 10 troy ounce silver Valiant will set you back by a similar amount to a 0.23 troy ounce gold sovereign. 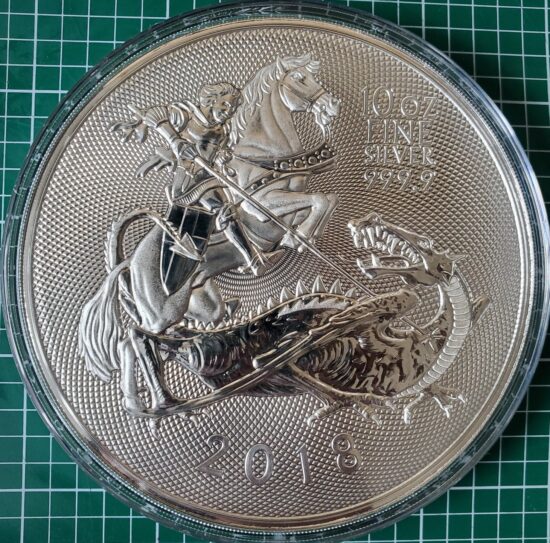