The mysterious wonder of the market world

The mysterious wonder of the market world

ABERDEEN, SCOTLAND – The small microphone that loops around his ear is hovering before his mouth like a fluffy ball of cotton. With a nod from the video crew, he takes to the stage.

“Hello everyone. Thank you for all coming out here tonight. I know it’s tricky these days, and we’re doing our best to keep in line with all the new rules, but I truly believe we have something to celebrate here today.

“Ladies and gentlemen… we did it.

“Everybody give yourself a pat on the back. Yes, I mean everybody. Come on– yes, you too at the back there. Give yourself a hand.

“This is an achievement we can all be proud of. A true triumph of mankind.

“I can barely put into words just how proud I am to be a member of the human race right now.

“What I’m about to show you here… it’s a wonder to behold. This, this… It speaks to both the mystery and the endless potential of man. I call it one of the “financial wonders of the world”.

“Here it is, my dear fellows. Despite all the obstacles in our path, every great hurdle that has been thrown at us through this brutal year… the outstanding quantity of debt in the world with a negative interest rate has reached new, all-time highs! Eighteen trillion dollars, baby! 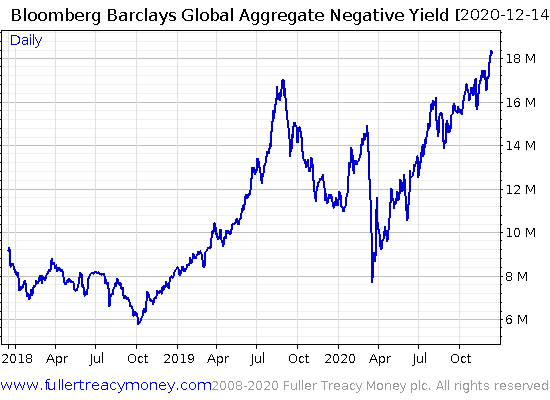 That’s how my TED talk would go like anyhow…

All joking aside, that chart really is a wonder of the modern world. Never before in human history has anyone been lending money for less than zero per cent interest, let alone trillions of it. Like the Colossus of Rhodes, it reaches into the heavens and is destined to be ruined by an earthquake.

The rumblings of such an earthquake occurred in March of this year, where as you can see, the flimsy foundations of this strange market suddenly fell away. Over just ten days, the quantity of negative yielding debt in the world suddenly halved, as the highly priced debt rapidly sold off. Over $7 trillion of debt went from paying less than zero to yielding an actual return – until the central bankers rode in once again to crush interest rates.

We’ve written often in this letter on the phenomenon of negative-yielding debt, wondering what would drive somebody to lend money for less than nothing. While we have pondered many explanations for their existence (The Ice Queen arrives in Italy – 14 October) and some of them are compelling, to my eyes this mountain of anti-debt remains as mysterious as it is gigantic.

While I’ve heard all the arguments, I still don’t feel like we truly grasp the nature of this beast. It is indeed a wonder, which leaves one in awe and full of questions.

$18 trillion… that’s more than 13 trillion quid of loans that mankind has priced at negative interest rates. Though I still don’t feel I understand its nature, or even its fundamental cause, it’s still a hell of an achievement.

One thing I do know though. The higher this colossus reaches, the larger the negative- yielding debt pile grows, the more attractive gold shall become. Gold’s only major flaw as an investment is that it pays no interest. But if financial assets don’t pay interest either – which is what that chart is ultimately telling you – the argument against begins to evaporate. The taller this market colossus towers, the brighter gold’s future becomes.

PS My publisher is calling it “the greatest event in Southbank Investment Research history” – and with good reason. Attracting controversy and attention in equal measure, this will easily be our biggest event this year. You’ll be hearing more about it tomorrow – but I can give you an insider peak here.