Regarding yesterday’s letter about inflation being the ever-present threat to all savers, I wanted to bring up this astute observation made by our new analyst, Nathan Tipping, concerning gold prices and their inherent tension with the stockmarket highs. In his previous role, Nathan covered emerging market fixed income, focusing on Africa and the Middle East – and with millions of investors puzzled by the duelling highs of these markets, I can’t think of a better time to introduce him to our readership.

It was like a day of reckoning… for 23 major world markets.

It brought an end to a bull market that had seen the Dow Jones Industrial Average (DJIA) soar over 300% in five years… and the Dow would take years to recover.

The FTSE lost 23% in two days… and New Zealand’s market even lost 60% of its value in a crisis analysts were quick to term a Black Swan event.

But in fact this was the aftermath of the infamous “Black Monday” market crash of 1987.

To this day, the “experts” debate what exactly happened. There was no subprime mortgage lending house of cards to point to, no protectionist Smoot-Hawley Tariff to scapegoat.

But markets had been jittery for a while.

Newly published trade deficit data was higher than expected. Oil supplies were under threat as tensions between Iran and Kuwait escalated. US growth was beginning to slow. The dollar was down, interest rates up.

The Dow had already slid a few per cent the week before.

As the markets closed for the weekend, downward pressure on stocks continued to build.

And then, on the morning of Monday 19 October 1987, share prices fell through the floor.

Computerised trading models used by portfolio insurers – a relative novelty at the time – began to kick in. As the sell-off commenced, these systems sought to cut their portfolios’ losses and issued more sell orders, exacerbating the downturn.

Markets fells so fast that the price of derivatives were no longer linked to the value of their underlying stocks.

The Dow lost nearly 22% in a single day. The only thing that capped the Nasdaq’s fall at 11.2% was the fact the market system crashed.

This week marks Black Monday’s 33rd anniversary. And while we avoided the second Great Depression many feared at the time, the anniversary doesn’t seem one to celebrate.

But the anniversary of the crash reminded me of a conversation I had with a commodities analyst at a major British bank last year.

At the time, the analyst pointed out that both gold and the S&P 500 were both nudging new highs. Something had to give.

Why? Gold is a safe haven. It’s the first port of call for investors when markets get rocky. Not only is it a tangible asset, but the government can’t print it, and central banks can’t fiddle it with interest rates. And, since it’s priced in US dollars, it weathers inflation pretty well too.

Have a look at the chart below. It charts the Dow-to-gold ratio. After the financial crisis, gold became a lot more powerful. 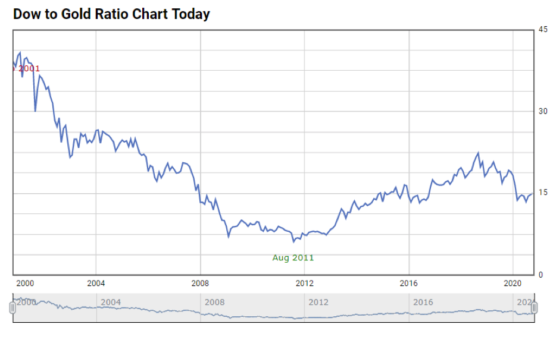 Source: Dogs of the Dow

As a general rule, when the stockmarket is down due to a recession, gold prices rise.

Between August 2007 and August 2009, the S&P 500 fell by around 42%. Over the same period, spot prices for gold rose 43%. So during recessions, gold and stocks generally move inversely.

It feels almost like déjà vu. We’ve come a long way since then, but in many ways we’re back where we started. Every forecast and predication made in 2019 has been upended by the pandemic, but now we’re seeing exactly the same contradiction in the markets.

The onset of the pandemic-battered stockmarkets around the world – but not for long, thanks to quantitative easing. When stockmarkets were in the doldrums, the Federal Reserve picked them up, dusted them off, and sent them on their way.

And so the disconnect continues. Despite a temporary dip back at the start of September, markets are still riding high. 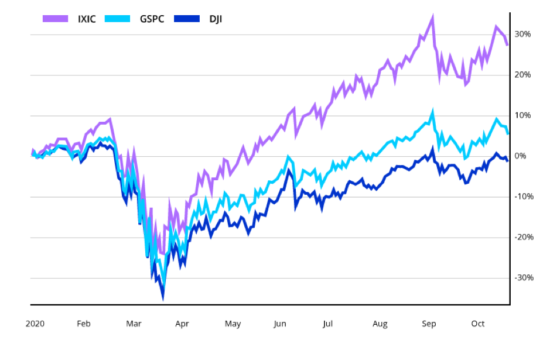 It appears that markets are operating on their own plane of existence. Last week, the governor of the Federal Reserve of Boston warned that low interest rates could be fuelling asset bubbles and cautioned that they lack the tools to stop excessive risk-taking.

There’s certainly something to be said about the make-up of the current market. Compared to the stockmarket in 1987, or in the run-up to the dotcom bubble, the market is being carried by a few big tech names. Without them, it would be in the red right now.

A sell-off in tech stocks would hurt. But what if other names are overvalued too?

And so I find myself recalling my conversation with the commodities analyst. As she said, something has to give. It’s just a matter of figuring out what it’ll be and when.

Or perhaps I’m too doom and gloom. Perhaps we’ll eventually see a recovery that will justify current valuations.

I’m interested to hear what you think. Drop me a line at [email protected].

PS With the economy in dire straits, governments are splashing the cash to keep growth going. You’re probably wondering how they’re we’re going to pay it back – I certainly am. Fortunately, my colleague, Nick Hubble, may be able to offer some insight. Find out more here.