Riot with a platinum lining

Riot with a platinum lining

PICCADILLY, MANCHESTER – Gold holds the crown as the metal which feeds on social unrest and distrust in authority.

But I suspect it shall be its elder sister platinum which will soar if the chaos unfolding in South Africa persists and spreads further throughout the country.

I am no authority on the political situation in the country, but with thousands of soldiers being deployed to quell riots, looting, and attacks on critical infrastructure, I think we can agree it is very grave indeed. For a country like South Africa, which the world relies upon for vast supplies of natural resources, the knock-on effects could be huge.

Platinum, which the world uses as much as an industrial metal as it does in jewellery, may be in for a hell of a supply shock if the unrest ends up disrupting the precious metals mines in the Bushveld. The mines themselves don’t need to be raided for this to occur either – a disruption of the supply chains leading out of them would create a similar problem.

To give you an idea of just how enormous South Africa’s share of the platinum market is, let me give you an example. If we take a look at global platinum output in 2019 (to avoid WuFlu disruptions skewing the figures), we can see that the world produced a total of 6145 tonnes of new platinum supply that year. Over 70% of that was South Africa, which produced 4,430 tonnes. The closest competitor is Russia, with a puny 710 tonnes.

Net platinum demand that year (taking into account recycled platinum, which blunts demand) was 4,880 tonnes. If South Africa’s output is suddenly in jeopardy, the platinum market could be in for some brutal volatility – and higher prices.

In short, South Africa is to platinum what Saudi Arabia is to oil – and precious metals investors should be paying attention to the chaos over there.

Platinum has been down in the dumps since the Volkswagen emissions scandal, but over the past year it got some of its confidence back. Could this be the catalyst that brings back its prestige? 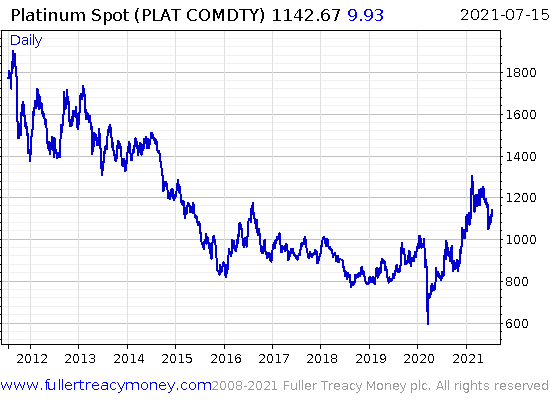 That’s something I’m keeping an eye on, anyhow. I know several Capital & Conflict readers hail from South Africa – for those of you reading this over there, I hope you’re staying out of trouble.

The scenes of the violence over there remind you to count your blessings. Peace and civilisation are fragile things, and I’m lucky to have both here in Blighty.

It’s been an awfully long time since I’ve been in Manchester outside of a train. The last time would have been when I was a kid, on an outing from my grandparents’ place in Warrington.

It’s a bonny place. And everyone seems to be smoking cigarettes instead of vaping, which makes a welcome change of scenery. I shan’t be staying long however – the town of Cheddar calls…

PS Our latest Fortune & Freedom podcast with Nigel Farage and Nickolai Hubble is being released today – don’t miss it!