Now to be clear, I have adored this asset for a long time – you might call me something of a collector. But I believe its properties are uniquely suited to the environment we now face – and yet its price doesn’t reflect this. Or at least, not to the degree I would expect.

In 2021, we’re going to find out if my instincts are correct. I may well be wrong, but let’s find out.

I’ve not been too quiet about my affection for this investment in the past. It’s silver – the white metal, gold’s hyperactive little sister. In March last year as its price was plummeting, I wrote in this letter that the silver buying opportunity of a decade would soon be upon us (When crises occur, this asset mysteriously disappears – 17 March 2020). Silver bottomed that very day at £10.28, so I wasn’t as early in alerting you as I’d like, but it stayed down there for a little while and I strongly believe there won’t be another opportunity to get in on silver that cheaply for at least a decade.

The problem at that time was getting your hands on silver for a price even close to a tenner – bullion dealers were selling out, and hiking their premiums on what little they could find. The next best thing if you wanted silver exposure was to get in on physically backed silver ETFs, some of which were actually trading at a discount to the actual value of the silver they stored for investors.

Since then, silver has had a nice big bounce… but silver is nowhere close to climbing out of the pit it fell into after its peak in April 2011: 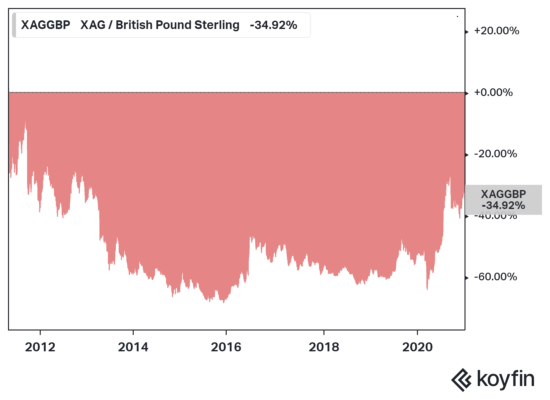 Gold meanwhile, has fully climbed out of the pit it fell into after it peaked in September 2011: 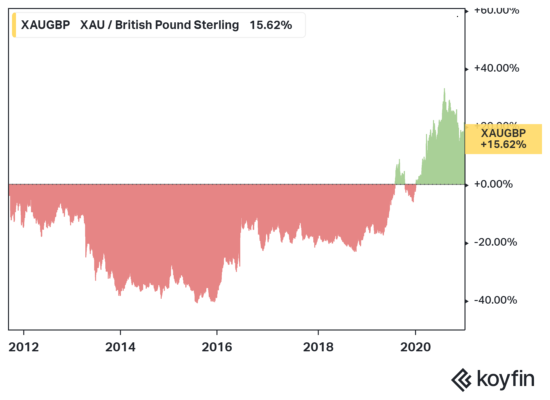 It may also be related to silver’s status as “poor man’s gold” – its cheapness relative to gold makes it an easier purchase for anybody wanting to protect their wealth. It is the poorest in society who are harmed the most by the monetary excesses and profligate spending of governments, and buying an ounce of silver to protect your wealth is much more affordable than an ounce of gold.

This difference in how gold and silver are affected by real interest rates accounts for why gold has outperformed silver as much as it has since the precious metals peak back in 2011. We have seen a massive suppression and collapse of interest rates, while inflation in the real world has remained – relatively – muted.

I think that changes this year. Massive government spending programmes with interest rates at zero, agricultural commodities breaking higher after eight years in constant brutal decline, oil climbing despite the lockdowns and fit to burst once we reopen… this all speaks of higher inflation coming down the line to me.

And when that inflation reveals itself this year, I think silver is really gonna pop. So much so, that we’ve actually had some silver minted for those who want to get ahead of this theme and profit from it. These are hand-poured, limited edition silver rounds, emblazoned with a phrase that will be applicable to silver’s rise if I’m correct: Ad Lunam – “to the moon”.

Click here to get your hands on one, and to get access to a special report I’ve written with Nickolai Hubble on how best to get ahead of a boom in the silver price.