On the “real” price of a real asset

On the “real” price of a real asset

… and so do I. That was Charlie Morris there in a recent update of The Fleet Street Letter Monthly Alert. But he was responding to several of his subscribers who wanted to know if the opposite is true – if gold is in fact massively overvalued.

For by some metrics, this would appear to be the case. And indeed, some investors do believe gold to be in a bubble…

One metric in question that Charlie interrogated in his piece is the “real” price of gold – the price of gold when adjusted for consumer price inflation (CPI).

Here’s a chart of this “real” gold price: 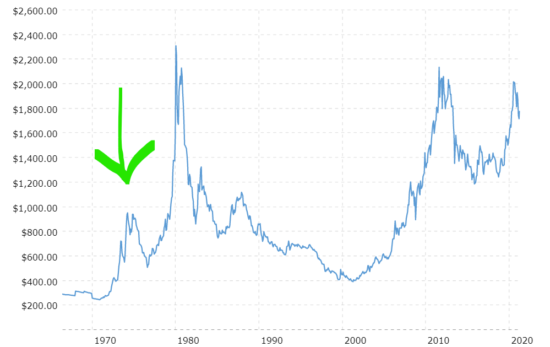 Note that we are using the dollar gold price
Source: Macrotrends

As you can see, in “real” terms the gold price is actually higher today than it was for much of the 1970s (indicated in green), when the gold price boomed due to high inflation.

If inflation today isn’t as high as it was in the 70s… then why is gold so much more expensive now?

Some would argue it’s because gold is massively overvalued. I would argue that the metric is fundamentally flawed to the point of being useless.

Note that in the chart above we are using the USD gold price and US CPI – however, the following observations are broadly the same no matter their country and currency.

The formula for calculating CPI has changed drastically over the decades to accommodate changes in the average person’s lifestyle and broader shifts in the economy. Forget the rate of CPI back in the 1970s – CPI itself was measuring different things. It may have had the same acronym, but the formula had different inputs; a different nature.

And that’s leaving aside the politically sensitive status of all government inflation statistics, and how they can be and are leaned on by politicos to serve their agenda. Greek politicos in the 1990s had a particular talent for this in their plot to join the euro. They needed to get their inflation statistics down to be eligible for membership, and succeeded with the help of some ludicrous tactics. As Michael Lewis wrote in 2010:

Greek-government statisticians did things like remove (high-priced) tomatoes from the consumer price index on the day inflation was measured. “We went to see the guy who created all these numbers,” a former Wall Street analyst of European economies told me. “We could not stop laughing. He explained how he took out the lemons and put in the oranges. There was a lot of massaging of the index.”

Rather than relying on the CPI-adjusted price of gold to get a handle on the “real” price of gold, Charlie opts for sturdier metrics – long-term price averages and the size of the total money supply. As he explained in his latest update to subscribers:

If one is to assess whether gold is over- or under-valued, I would prefer to use a 70-year average.

It is also important to remember that the “financialisation” of the US (and global) economy has changed things.

It is hard to escape the obvious disconnect between the behaviour over the last 40 years or so of, on one hand, the prices of goods and services, and, on the other hand, the soaring price of assets.

Gold has been caught up with the latter, as conventional bonds, ILBs [inflation-linked bonds], property and equities have surged in price.

Financial deregulation kicked off in the early 1980s in the US and some other countries.

By the 1990s, the money supply was growing much faster than inflation as we measure it with a basket of goods and services. We can measure the US money supply using “M2” – which is published by the Federal Reserve. 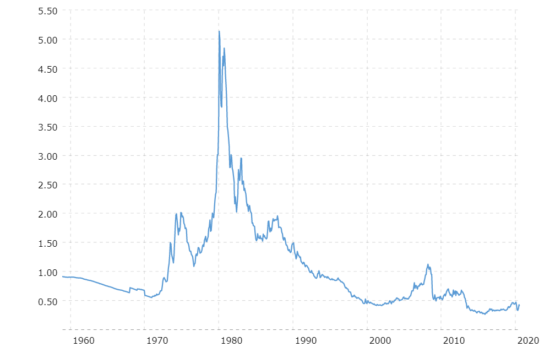 Historically, M2 has been closely linked with nominal GDP. But in recent years, it has even outgrown that. In 2020, M2 grew more than at any time in history and that is often cited as the source of the current excess in markets.

The last three decades have been unlike any that came before. I believe it is unreasonable to state that gold is expensive because it is so far ahead of CPI. When compared to the money supply, it is still behind…

One of the funny things I find with gold is that I can never be sure if I own enough. So I bought some more the other evening – and for what it’s worth, I’m pretty sure it wasn’t overvalued. Quite the opposite, in fact…