My goodness, my Guinness gold!

My goodness, my Guinness gold!

ABERDEEN, SCOTLAND – As the week draws to a close, I thought we should finish it off with a chart. And not just any old chart either – this has recently become my favourite chart of the gold price.

I bought some shares in a certain gold mining company recently – a purely speculative punt on my part. I traded this stock’s upswing last year when gold really took off, then sold it for a nice profit before the bear arrived and now hope to repeat the process. I could be wrong, but I don’t believe gold has much further to fall from here (mainly because interest rates can’t be allowed to rise much higher from here).

We mentioned the Royal Mint’s newly launched Gold ETC investment product in Monday’s letter – a project which had originally included plans for a gold-backed digital currency which were later ditched. In response, I’ve received some emails from the readership asking me about Kinesis, a private Australian project which aims to accomplish what the Royal Mint couldn’t – create a gold-backed cryptocurrency:

I was interested to learn about the Royal Mint’s aborted proposal for a gold-backed cryptocurrency – something of which I had not been previously aware. There is, however, an Australian company, Kinesis Money, launched last year (I think) by Aussie bullion exchange ABX, which is offering exactly that, with the promise that physical delivery of the underlying gold (or silver) can be demanded at any time by account holders (subject to quite modest minimum quantities). I do not know anyone who has opened an account with Kinesis and I am instinctively a little cautious about trusting in new ventures, but I (and I expect other of your readers) would be very interested in hearing your thoughts.

While I’ve heard of Kinesis, it’s not something I’d looked into personally. As it’s based in Australia, I thought I’d reach out to my colleagues based there who know their precious metals for their take on the project.

Their response was straightforward: the Kinesis project may well be legitimate, but there is at least one individual associated with it who they consider to be very untrustworthy. And as a result, they’re keeping away from it.

Owning gold bullion always carries a risk – there’s no perfect method. If it’s in your possession, you become a target for thieves. If it’s in somebody else’s possession, 1) is it really yours? and 2) are you sure you’d be able to get a hold of it when you really need it?

Whatever you decide, it’s not a decision to take lightly. And even the smallest red flag should be given your full attention. I hope there is nothing wrong with Kinesis – and hey, there may very well not be anything wrong with the project – but for me, on matters of gold, even the smallest warning sign means an immediate, hair-trigger “no”. Just a word of caution from a colleague is enough for me – whether or not it is for you, I don’t know, but I thought I’d pass this on.

Now, on to the good stuff: the best way of valuing gold…

There’s an investment house in Liechtenstein called Incrementum which annually publishes a free report called In Gold We Trust. Its yearly arrival is an event which many gold bugs look forward to, for it always stuffed with great charts and insight.

(In what seems a lifetime ago, I interviewed one of the main architects of that annual report – one Ronald-Peter Stöferle – for our 2019 Gold Summit. It was an illuminating conversation, and I’m hoping to record another with him again later in the year – watch this space.)

In previous editions of that annual report, Incrementum published a chart of the gold/beer ratio: the price of beer in gold throughout history, using average beer prices from the annual Oktoberfest celebration. As you might imagine, this fascinating ratio swiftly became my favourite means of valuing gold.

… But since then, it’s surpassed itself.

This chart is so good, I knew I had to post it in this letter. And Incrementum has graciously allowed me to print it in today’s Capital & Conflict.

Feast your eyes… upon 120 years of the gold/Guinness ratio: 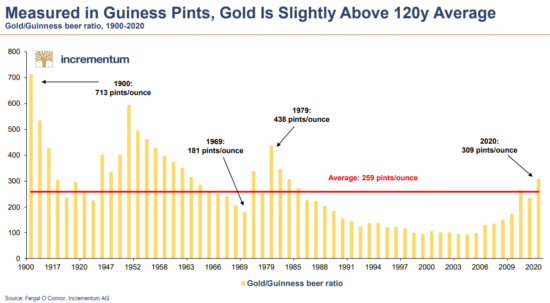 Having bottomed in the mid noughties, after trending down for the better part of the century… this looks bullish to me. I think we’ll be able to buy many more Guinnesses for our gold in the years to come – but how many? Just imagine being able to buy 700 pints of Guinness with a troy ounce of gold back in 1900…