SODERMALM, STOCKHOLM – A short note from me today, I’m just about to go live with our quarterly conference call for subscribers to The Price Report with Tim Price.

Tim has always been an outspoken character – but I’ve never seen him with such fury and conviction since the lockdowns were imposed. It’ll be an entertaining call, that’s for sure – everything from gold to bonds to bitcoin to Japan is on the agenda – and his readers will have plenty more questions for him to answer as well.

But before I head off and do that, I’d like to focus on gold with you for a second. Following the high made in August, the gold price here in Blighty has fallen by a couple hundred quid from £1,550, to around £1,350.

Some investors worried – could this be the end of gold’s bull run? Is aurum about to flounder and flail as it did in the few years after its 2011 peak, brutalising those who cherished it most?

I certainly don’t think so (in fact, I think this may be one of the final “buy the dip” opportunities before the next leg up in the gold price – but that’s for another letter). And nor does my colleague Nickolai, who reckons the gold market is going to face a crisis of supply being unable to meet demand in the near future, which he’ll be telling you all about next week.

But for today, I’d like to show you what Charlie Morris makes of gold’s recent fall. He’s got a compelling theory for the market action, which revolves around the opaque and restricted nature of the Chinese gold market…

You’ll need a subscription to The Fleet Street Letter Wealth Builder to get the inside scoop on how Charlie’s playing gold, but I can show you the following snippet:

… the gold price has weakened in recent weeks, slowly at first, then quickly. It has taken investors by surprise and some sold their gold ETFs. The black line is the number of ounces of gold held in the vaults by the ETFs. Investor flows have tended to corelate with price, but according to my research linking the two, the modest sales would support a $40 drop, when the recent peak to fall price move has been more like $300.

Source: Bloomberg – gold price and the gold held in vaults by the gold ETFs since 2011

Looking around for a culprit to blame for the price fall, we come to China. 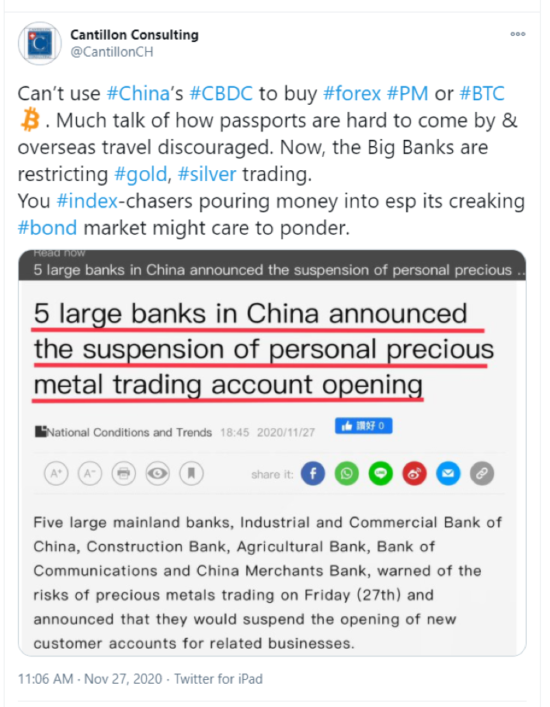 This strikes me as a kind of capital control. It is strange because the Chinese government has encouraged citizens to buy gold. It saved them from doing it and being the Communist Party, it could confiscate for whatever reason, when required. Not a bad idea for an authoritarian government.

With China being a long-term accumulator of gold, whenever gold has traded at a premium in Shanghai, it has bought it in London and shipped it home. That has been supportive for the price. But in 2020, this hasn’t happened.

Instead, London gold (LBMA “world” price) has been trading higher than Shanghai gold. They’ll never let it leave the country, by selling it back, and so I believe London gold has slipped back to where the Chinese will support it. With a bit of luck, that job is done…

I’ll be very surprised if gold falls much further from here – but it is (still) 2020, so that’s probably not all that reassuring.

But keep an eye out next week when Nickolai will publish his analysis on gold. For he’s due to deliver a bold claim indeed on the shiny stuff…