How the world just changed, in two metrics

How the world just changed, in two metrics

In today’s letter, I’d like to focus on two things.

There are very few traders and investment managers around today who were working the last time they occurred. Some weren’t even alive (I wasn’t).

Much of the financial world likely has no experience with what’s just happened, and it’s likely they’ll be similarly unfamiliar with what’s about to as a result.

But that’s where we come in. It’s our job here at Southbank Investment Research to mine the horizon for clues as to what’s coming for you and your money. That’s why Nick Hubble believes a suitable alternate name for our company is “2.9 Mile Publications”, as that’s the distance at which the average person can see into the horizon before the curvature of the earth obscures the view.

And that’s why we’ve arranged The 2019 Gold Summit, where we’ve brought some of the finest minds in the gold world to discuss what’s behind that curve.

But let’s get started with numero uno:

December, as you’ll recall, was not a good month for the stockmarket. 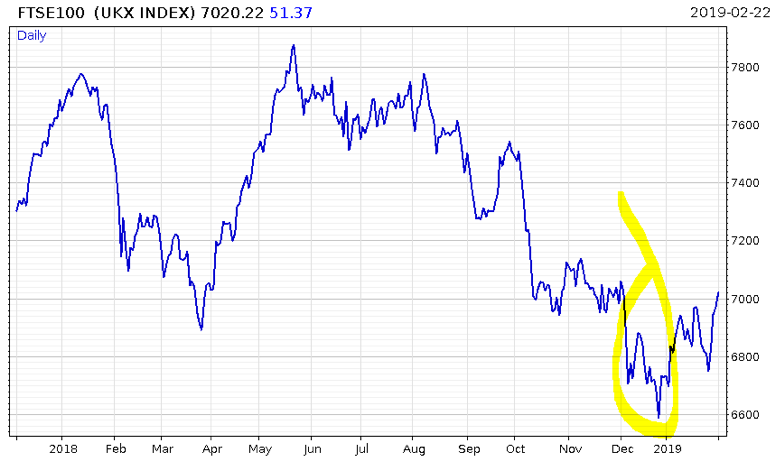 … not across the pond… 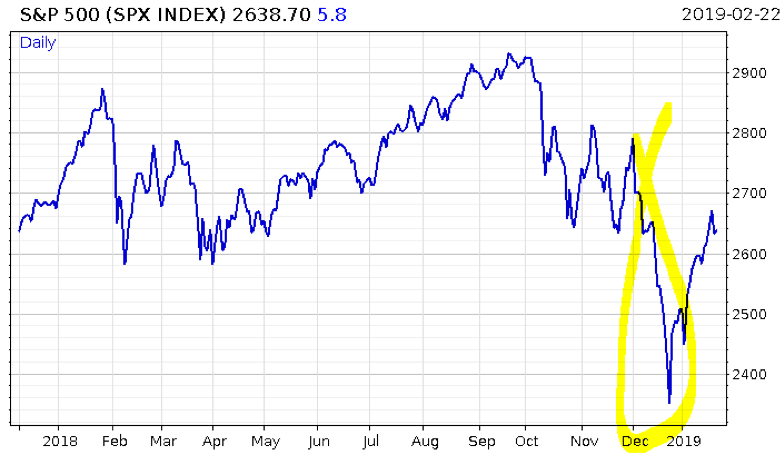 … and, uh, not anywhere else really either: 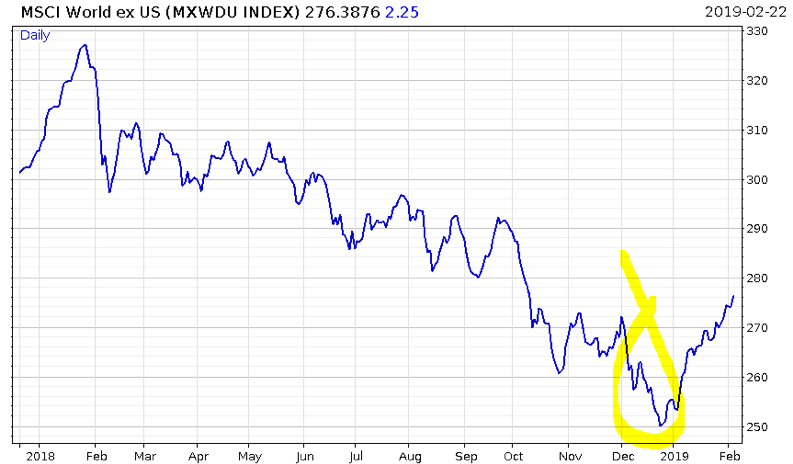 But amid this Christmas of discontent, something other than stocks was being sold off too.

And importantly, this asset is considered to be one of the safest investments you can own – ie, what everyone “should” have been buying during this period.

But they weren’t buying it. They were selling it too, alongside stocks.

This asset is a keystone within the global financial system, and to a degree, to the global economy.

The asset I’m referring to are US Treasury bonds – US government debt. In bad times past, foreign investors have flocked to them in a “bid to safety” thanks to the creditworthiness of the US Treasury and the dollar’s status as the global reserve currency.

Now, they were selling those US Treasuries on to US investors, who eagerly took them as the S&P had the worst Christmas Eve on record.

But this is a big hint that the US is going to have to start funding its own government. While that may seem trivial, this is something it hasn’t had to do in an awful long time, thanks to the economic policies of countries like Saudi Arabia and China. Those two countries in particular have played a huge part in funding the US government (Saudi Arabia since the early 70s, China since the early 00s) by lending the excess dollars they receive for oil and manufactured goods back to the US Treasury department at interest. It’s also why you haven’t seen much of a US foreign policy reaction to either country’s bad behaviour abroad – or at least not until recently.

The US central bank, the Federal Reserve, has of course also been funding the US government, but in a “second hand” fashion – buying the US Treasuries at market from an investor who’d bought them already.

It’s likely that this will become much more of a “first hand” affair when the US government runs into funding difficulty, if foreigners continue to sell US Treasuries (stop lending the US government money) even when stocks hit the tarmac.

But if the Fed begins overtly buying US Treasuries straight from the US Treasury department – printing dollars and handing them directly to the government – the US dollar is gonna get a hell of a lot cheaper.

… and a certain shiny yellow metal is set to become a lot more expensive. Which brings us to the second major event which occurred last year.

Richard Nixon shut the last direct link from fiat currency to gold, when he closed the dollar’s convertibility into gold (at a rate of $35/troy ounce) back in 1971.

But the last time central banks bought as much gold as they did in 2018, it was 1968, well before that even occurred. Global central banks want gold, and they are bid for size. 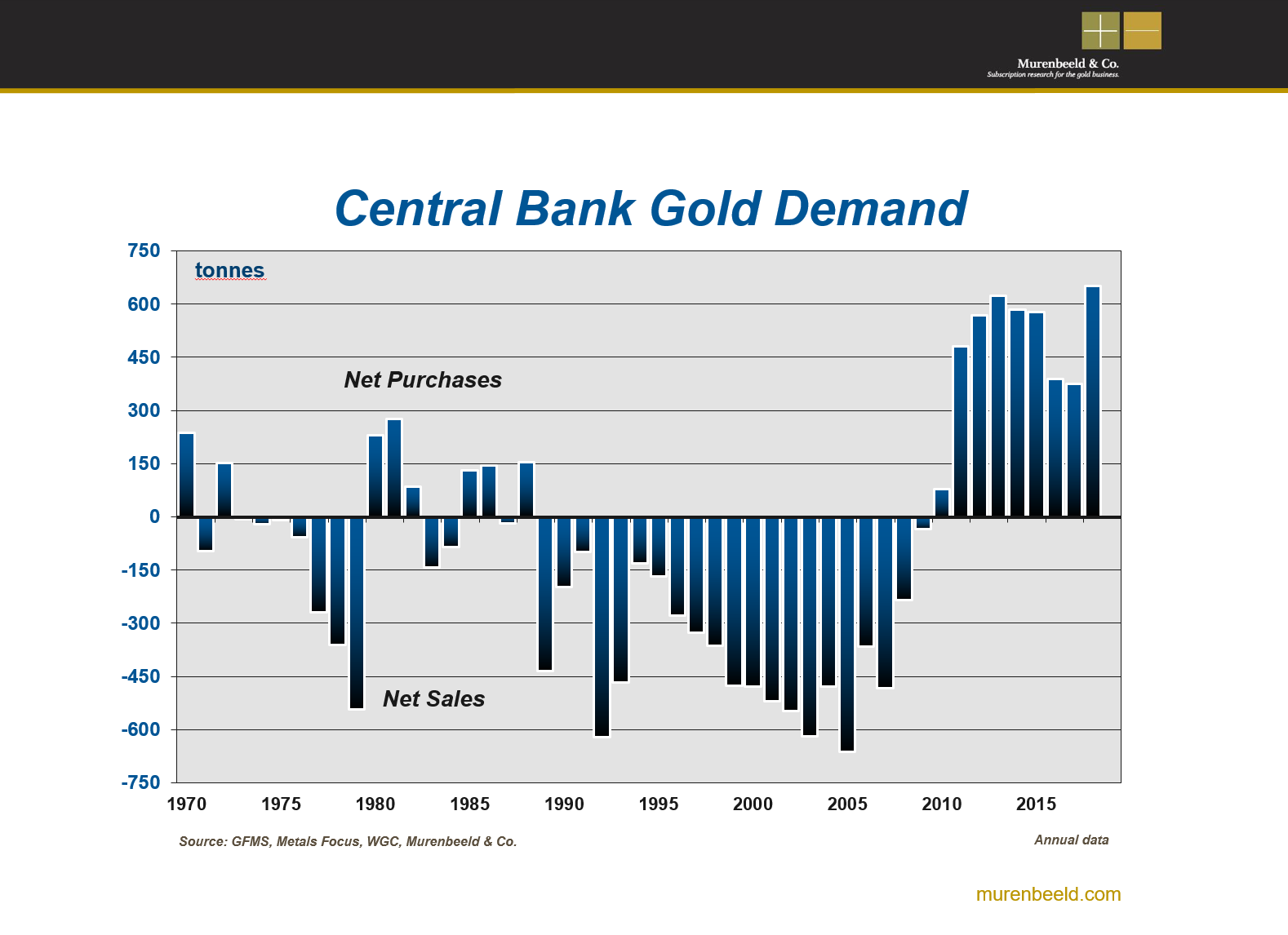 As you can see in the chart above, courtesy of Murenbeeld, it seems something clicked after the financial crisis. It seems somebody realised that selling gold reserves in a world increasing awash with debt wasn’t such a great strategy. With global debt now over £185 trillion, it seems our monetary masters have discovered the value of owning an asset that is nobody else’s liability.

Last year’s demand clocked in at 650. And in a familiar twist, those central banks are not wanting a side of US Treasuries with that, nor have they since 2013: 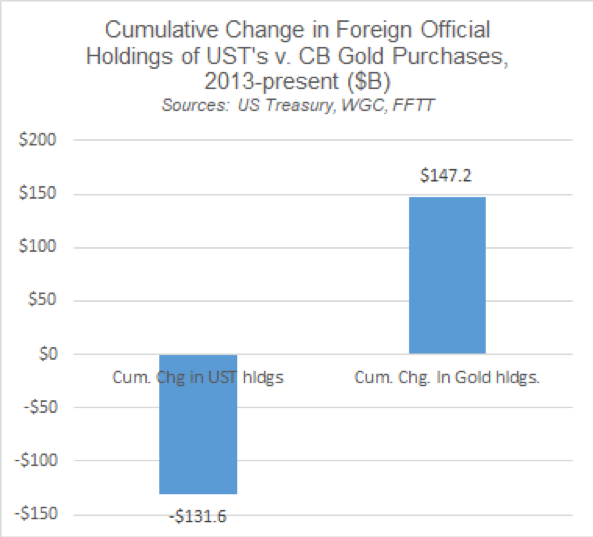 The chart above comes courtesy of Luke Gromen, a former Wallstreeter who we flew in for our 2019 Gold Summit. He’s got some radical but fascinating views as to what’s really going on in the plumbing of the financial system. The way he sees it, the big story isn’t about a return to the gold standard per se but something very similar. More importantly, it may already be happening. You won’t want to miss his interview – stay tuned.