Golden times are here once again…

Golden times are here once again…

WINDERMERE, LAKE DISTRICT – Two years ago, we took a step into the unknown as a business with the launch of our 2019 Gold Summit.

We hadn’t tried the format before, and we were unsure if it would be to our readers’ tastes.

A whole week of extensive long-form interviews with gold experts, all hosted by a lanky Scotsman with no idea what he’s doing. Would this really go down well with our readership? Was this really a good idea?

The gold market was telling us it was time to act. It had been a brutal 2018 for gold, due in large part to the actions of new Federal Reserve chair Jerome Powell, who had been steadily raising interest rates all year.

The higher the interest that can be earned with paper money, the less attractive gold becomes. But that wasn’t putting us off. For of course, it’s not just gold which loses its lustre in the face of high interest rates. With so much debt in the world, it was just a matter of time before something would crack. Similarly, it was only a matter of time before Powell was forced to reverse course and turn on the printing presses – to either prevent a crisis, or in response to one.

So in late 2018 we began to plan our Gold Summit, for we knew the time for gold’s reversal was coming due. The US stock market had begun feeling the pressure in September as the punchbowl of cheap debt became more and more expensive. It would continue to wet the bed until Christmas. Powell, on cue, threw in the towel: no more rate hikes. The reality of this – that Powell was stuck in the “zero interest rate trap” (where raising interest rates becomes harder and harder the lower they go) – began to sink in for markets through the beginning of 2019, right as we were running our Gold Summit.

The gold market had begun pricing in this turnaround by Powell through the end of 2018, but we were able to launch our Summit with gold around £1,000 an ounce. 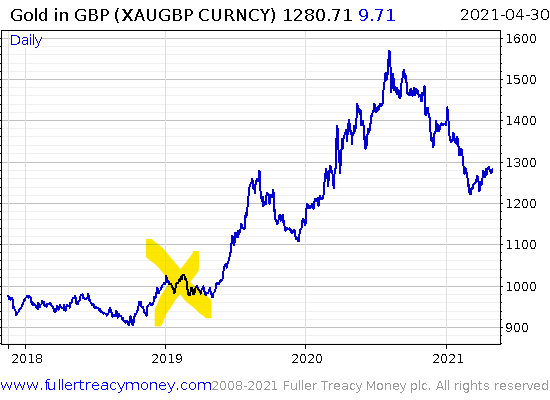 Turned out, it wasn’t a bad time to be talking about gold. And luckily for the clueless Scotsman hosting it, the Summit was a resounding success. Readers enjoyed the fireside chat format, where our guests could go into as much detail on their analysis and predictions as they liked.

And now dear reader, two years on – it is time to do it all once again. After a roaring summer last year, gold has had a grim start to the year. Bitcoiners claim their treasured asset has taken the wind out of its sails – that BTC has replaced gold’s role in an investment portfolio. Critics crow the same old spiel about gold being a pet rock with no cashflow or real purpose. But we know better.

Through the past few grim months for gold, we’ve been working on a new Gold Summit. For just as before, we think the tide will soon be turning on gold, and the wind will soon be strong in its sails once more. Sign up here, and we’ll show you why.

We’ve another great roster of market experts to explain: why gold, and why now. You’ll be hearing from the shrewd Grant Williams, Southbank Investment Research founder Bill Bonner, the wise Simon Mikhailovich over at The Bullion Reserve in New York, all of our in-house experts (including Nigel Farage and John Butler), and many more –all on the future of gold, and why this asset deserves a place in your portfolio. Especially right now.

If you enjoy reading this newsletter (and you can bear looking at my face rather than just reading my scribblings) I think you’re gonna love it. Sign up here, and I’ll see you soon.